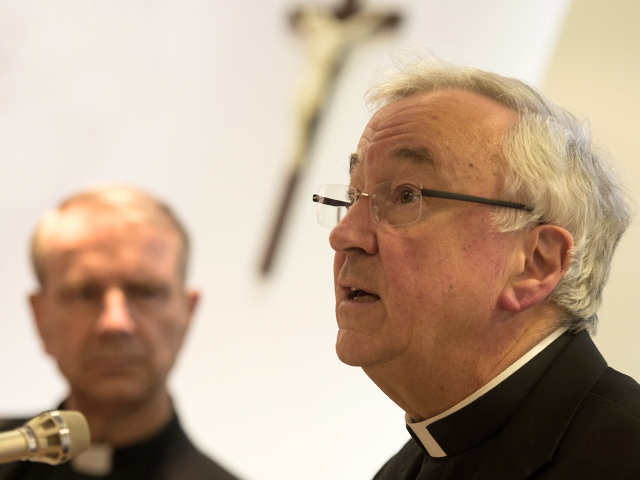 The Catholic Bishops’ Conference of England and Wales this week met in Leeds for its plenary meeting.

The Catholic Bishops’ Conference of England and Wales is the permanent assembly of Catholic Bishops and Personal Ordinaries in the two member countries. The membership of the Conference comprises the Archbishops, Bishops and Auxiliary Bishops of the 22 Dioceses within England and Wales, the Bishop of the Forces (Military Ordinariate), the Apostolic Eparch of the Ukrainian Church in Great Britain, the Ordinary of the Personal Ordinariate of Our Lady of Walsingham, and the Apostolic Prefect of the Falkland Islands.

At the conclusion of their Plenary Assembly on Thursday 7 May, the Catholic Bishops of England and Wales demonstrated solidarity with their brothers and sisters of the Ukrainian Catholic Church by concelebrating the Divine Liturgy of St John Chrysostom with Bishop Hlib Lonchyna, the Eparch of the Ukrainian faithful of the Byzantine Rite in Great Britain. This is the first time that all the Latin Rite bishops in England and Wales had together concelebrated at a Mass in an eastern Liturgical Rite of the Catholic Church. Prayers were offered for all in the Ukraine and for the estimated 35,000 Ukrainians in this country.

Prayers were also offered to the people of South Sudan, the Philippines and Myanmar following recent visits by Bishops on behalf of the Conference.

The Bishops called for the Catholic Community of England and Wales to pray for Christian Unity and the people of the Holy Land on May 25, when Pope Francis meets Ecumenical Patriarch of Constantinople Bartholomew, considered first among equals of the Orthodox bishops. There are 300 million Orthodox worldwide. The meeting takes place on 25 May in Jerusalem as part of Pope Francis’ pilgrimage to the Holy Land.

During the plenary meeting, in addition to many other issues and ongoing work by the Conference, the Bishops discussed the forthcoming Extraordinary Synod on the family this Autumn, the ongoing debate around assisted suicide and the care of elderly and vulnerable people and centenary commemorations for the fallen of the First World War. The Bishops also reflected on the recent human trafficking conference the Conference organised in the Vatican, which was attended and commended by Pope Francis.