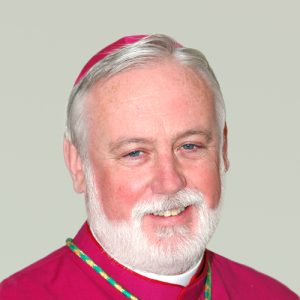 A profile of the Secretary (Relations with States) to the Holy See's Secretariat of the State, His Excellency Archbishop Paul Richard Gallagher STL JCD.

Paul Richard Gallagher was born in Liverpool on 23 January 1954.  He was educated at St Francis Xavier School, Liverpool, and was ordained to the priesthood by Archbishop Derek Worlock in the Metropolitan Cathedral of Christ the King on 31 July 1977.

His first appointment was as assistant priest in Holy Name parish, Fazakerley, where his duties included being a chaplain to the then Fazakerley Hospital, now University Hospital Aintree.

He studied at the Pontifical Ecclesiastical Academy in Rome, the training ground for Vatican diplomats, graduating in 1984 with a Doctorate in Canon Law.  His first three postings in the diplomatic service took him to three continents: to Africa and Tanzania; Uruguay in South America and to Asia and the Philippines. He then returned to Rome before becoming the Representative of the Holy See at the Council of Europe in Strasbourg.

Pope Francis appointed him as Secretary for Relations with States on 8 November 2014.

For more, please visit the official site for the Holy See’s Secretariat of State.