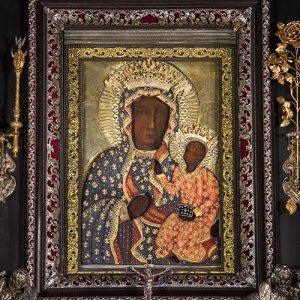 The Polish Catholic Mission coordinates the pastoral care for Poles living in England and Wales. Today, it covers nearly 70 parishes and over 200 towns where Mass is celebrated in the Polish language on a regular basis.

The history of the Polish Catholic Mission in England and Wales began in 1853 when one of the first chaplains Fr. Emeryk Podolski led church services for Poles in a chapel on Sutton Street in London’s Soho District.

The Polish chaplaincy was placed on a permanent footing in 1894 by Cardinal Vaughan, the then Archbishop of Westminster. He also appointed Bl. Franciszka Siedliska, founder of the Congregation of the Holy Family of Nazareth and its spiritual director, Rev. Lechert CR to establish a more permanent Polish Catholic Mission and to take care of the Poles.

With Mother Siedliska came two other sisters who started the first Polish primary school in the UK. From then on Polish services were regularly held in a chapel first in Globe Street, then in Cambridge Heath Road in Bethnal Green in the East End of London.

From 1905 the Polish chaplaincy was located in the rented Polish church in Mercer Street in North London. During the First World War the chaplains had to look after not only the new groups of immigrants but the many Polish prisoners-of-war who were interned at Alexandra Palace, Clay Hill, Feltham, Potters Bar and elsewhere.

In 1928 a church building was bought for £4,000 from the Swedenborg Society in Devonia Road, Islington. The property with its outbuildings was used as a Church, a mission centre and a space for a Polish Saturday school. Cardinal Bourne of Westminster, helped the mission with a £1000 loan for refurbishment. It became the first Polish-owned ecclesiastical building in the British Isles. It was consecrated on 30 October 1930 by Cardinal August Hlond, primate of Poland in the presence of Cardinal Bourne.

In the 1980s, Poles in Britain expanded due to a wave of migration following the imposition of Martial law in Poland in 1981.

The next wave of immigrants to the United Kingdom occurred after Poland’s accession to the European Union in 2004 and the opening of the UK job market to Poles, among other Central Europeans.

Today, Polish churches are full on Sundays and new Polish pastoral centres continue to be established.