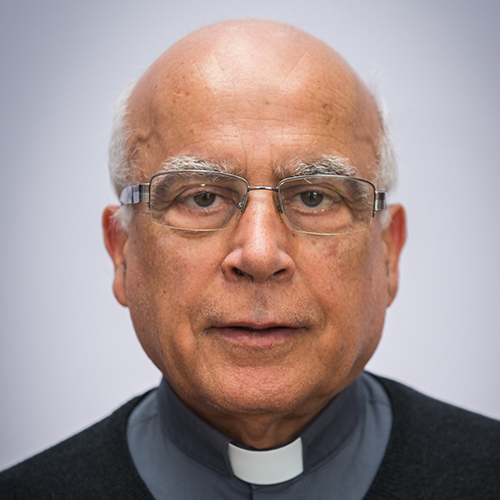 A profile of the Catholic Bishop of Gibraltar, the Right Reverend Carmelo Zammit.

The Right Reverend Carmelo Zammit is the Bishop of Gibraltar.

Bishop Zammit was born in Gudja, south Malta, in 1949 and was ordained to the priesthood in 1974.

In 1976, along with other young Maltese priests he was invited, by Bishop Rapallo, to minister in Gibraltar.

He served the Diocese in a number of different capacities from 1976 to 1998. He taught and served as Chaplain to both Boys and Girls Comprehensive Schools.

He was also Chaplain to a number of different organisations in the Diocese; as Bishop’s delegate on the Religious Education Board for Government Schools, and as a member of the Prison Board and Prison Chaplain.

In 1998, he returned to his native Malta, where he was appointed Chancellor of the Archdiocese of Malta and served the Archdiocese in a number of key roles until his appointment as Bishop of Gibraltar on 24 June 2016.

After his return to Malta, Bishop Zammit continued to be a frequent visitor to the Rock and kept close contact with the Priests and people of Gibraltar.

He was ordained Bishop of Gibraltar on 8 September 2016.

The Diocese was formed on 19 November 1910 when the Vicariate Apostolic of Gibraltar was elevated to become a diocese.

Gibraltar is a British Overseas Territory located on the southern end of the Iberian Peninsula at the entrance of the Mediterranean.

The Bishop of Gibraltar is the ordinary of the Diocese and is immediately subject to the Holy See.

Statistics show that roughly three quarters of the 28,800 people living in Gibraltar are Catholic – almost 22,000 people.