Pope Francis’ message for the World Day of Migrants and Refugees 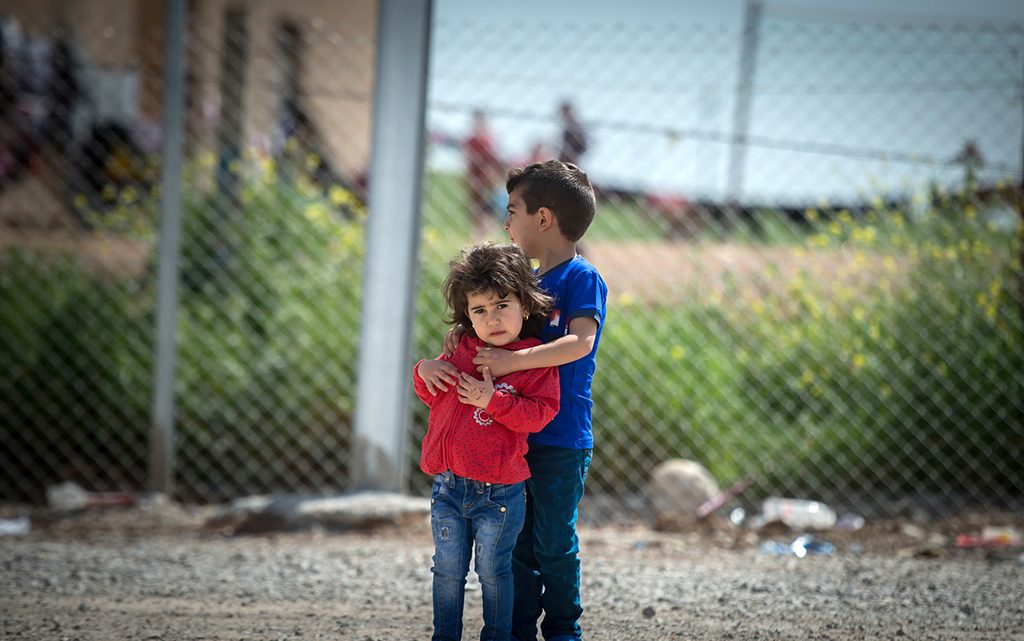 CBCEW » Migrants and Refugees » » Pope Francis’ message for the...

Here’s Pope Francis’ message for the World Day of Migrants and Refugees celebrated on Sunday, 15 January 2017. The Holy Father focuses, in particular, on the realities faced by child migrants and says “among migrants, children constitute the most vulnerable group, because as they face the life ahead of them, they are invisible and voiceless.”

“Child Migrants, the Vulnerable and the Voiceless”

“Whoever receives one such child in my name receives me; and whoever receives me, receives not me but him who sent me” (Mk 9:37; cf. Mt 18:5; Lk 9:48; Jn 13:20). With these words, the Evangelists remind the Christian community of Jesus’ teaching, which both inspires and challenges. This phrase traces the sure path which leads to God; it begins with the smallest and, through the grace of our Saviour, it grows into the practice of welcoming others. To be welcoming is a necessary condition for making this journey a concrete reality: God made himself one of us. In Jesus God became a child, and the openness of faith to God, which nourishes hope, is expressed in loving proximity to the smallest and the weakest. Charity, faith and hope are all actively present in the spiritual and corporal works of mercy, as we have rediscovered during the recent Extraordinary Jubilee.

But the Evangelists reflect also on the responsibility of the one who works against mercy: “Whoever causes one of these little ones who believe in me to sin: it is better for him to have a great millstone fastened round his neck and be drowned in the depth of the sea” (Mt 18:6; cf. Mk 9:42; Lk 17:2). How can we ignore this severe warning when we see the exploitation carried out by unscrupulous people? Such exploitation harms young girls and boys who are led into prostitution or into the mire of pornography; who are enslaved as child labourers or soldiers; who are caught up in drug trafficking and other forms of criminality; who are forced to flee from conflict and persecution, risking isolation and abandonment.

For this reason, on the occasion of the annual World Day of Migrants and Refugees, I feel compelled to draw attention to the reality of child migrants, especially the ones who are alone. In doing so I ask everyone to take care of the young, who in a threefold way are defenceless: they are children, they are foreigners, and they have no means to protect themselves. I ask everyone to help those who, for various reasons, are forced to live far from their homeland and are separated from their families.

Migration today is not a phenomenon limited to some areas of the planet. It affects all continents and is growing into a tragic situation of global proportions. Not only does this concern those looking for dignified work or better living conditions, but also men and women, the elderly and children, who are forced to leave their homes in the hope of finding safety, peace and security. Children are the first among those to pay the heavy toll of emigration, almost always caused by violence, poverty, environmental conditions, as well as the negative aspects of globalization. The unrestrained competition for quick and easy profit brings with it the cultivation of perverse scourges such as child trafficking, the exploitation and abuse of minors and, generally, the depriving of rights intrinsic to childhood as sanctioned by the International Convention on the Rights of the Child.

Childhood, given its fragile nature, has unique and inalienable needs. Above all else, there is the right to a healthy and secure family environment, where a child can grow under the guidance and example of a father and a mother; then there is the right and duty to receive adequate education, primarily in the family and also in the school, where children can grow as persons and agents of their own future and the future of their respective countries. Indeed, in many areas of the world, reading, writing and the most basic arithmetic is still the privilege of only a few. All children, furthermore, have the right to recreation; in a word, they have the right to be children.

And yet among migrants, children constitute the most vulnerable group, because as they face the life ahead of them, they are invisible and voiceless: their precarious situation deprives them of documentation, hiding them from the world’s eyes; the absence of adults to accompany them prevents their voices from being raised and heard. In this way, migrant children easily end up at the lowest levels of human degradation, where illegality and violence destroy the future of too many innocents, while the network of child abuse is difficult to break up.

How should we respond to this reality?

Firstly, we need to become aware that the phenomenon of migration is not unrelated to salvation history, but rather a part of that history. One of God’s commandments is connected to it: “You shall not wrong a stranger or oppress him, for you were strangers in the land of Egypt” (Ex 22:21); “Love the sojourner therefore; for you were sojourners in the land of Egypt” (Deut 10:19). This phenomenon constitutes a sign of the times, a sign which speaks of the providential work of God in history and in the human community, with a view to universal communion. While appreciating the issues, and often the suffering and tragedy of migration, as too the difficulties connected with the demands of offering a dignified welcome to these persons, the Church nevertheless encourages us to recognize God’s plan. She invites us to do this precisely amidst this phenomenon, with the certainty that no one is a stranger in the Christian community, which embraces “every nation, tribe, people and tongue” (Rev 7:9). Each person is precious; persons are more important than things, and the worth of an institution is measured by the way it treats the life and dignity of human beings, particularly when they are vulnerable, as in the case of child migrants.

Furthermore, we need to work towards protection, integration and long-term solutions.

We are primarily concerned with adopting every possible measure to guarantee the protection and safety of child migrants, because “these boys and girls often end up on the street abandoned to themselves and prey to unscrupulous exploiters who often transform them into the object of physical, moral and sexual violence” (Benedict XVI, Message for the World Day of Migrants and Refugees, 2008).

Moreover, the dividing line between migration and trafficking can at times be very subtle. There are many factors which contribute to making migrants vulnerable, especially if they are children: poverty and the lack of means to survive – to which are added unrealistic expectations generated by the media; the low level of literacy; ignorance of the law, of the culture and frequently of the language of host countries. All of this renders children physically and psychologically dependent. But the most powerful force driving the exploitation and abuse of children is demand. If more rigorous and effective action is not taken against those who profit from such abuse, we will not be able to stop the multiple forms of slavery where children are the victims.

It is necessary, therefore, for immigrants to cooperate ever more closely with the communities that welcome them, for the good of their own children. We are deeply grateful to organizations and institutions, both ecclesial and civil, that commit time and resources to protect minors from various forms of abuse. It is important that evermore effective and incisive cooperation be implemented, based not only on the exchange of information, but also on the reinforcement of networks capable of assuring timely and specific intervention; and this, without underestimating the strength that ecclesial communities reveal especially when they are united in prayer and fraternal communion.

Secondly, we need to work for the integration of children and youngsters who are migrants. They depend totally on the adult community. Very often the scarcity of financial resources prevents the adoption of adequate policies aimed at assistance and inclusion. As a result, instead of favouring the social integration of child migrants, or programmes for safe and assisted repatriation, there is simply an attempt to curb the entrance of migrants, which in turn fosters illegal networks; or else immigrants are repatriated to their country of origin without any concern for their “best interests”.

The condition of child migrants is worsened when their status is not regularized or when they are recruited by criminal organizations. In such cases they are usually sent to detention centres. It is not unusual for them to be arrested, and because they have no money to pay the fine or for the return journey, they can be incarcerated for long periods, exposed to various kinds of abuse and violence. In these instances, the right of states to control migratory movement and to protect the common good of the nation must be seen in conjunction with the duty to resolve and regularize the situation of child migrants, fully respecting their dignity and seeking to meet their needs when they are alone, but also the needs of their parents, for the good of the entire family.

Of fundamental importance is the adoption of adequate national procedures and mutually agreed plans of cooperation between countries of origin and of destination, with the intention of eliminating the causes of the forced emigration of minors.

Thirdly, to all I address a heartfelt appeal that long-term solutions be sought and adopted. Since this is a complex phenomenon, the question of child migrants must be tackled at its source. Wars, human rights violations, corruption, poverty, environmental imbalance and disasters, are all causes of this problem. Children are the first to suffer, at times suffering torture and other physical violence, in addition to moral and psychological aggression, which almost always leave indelible scars.

It is absolutely necessary, therefore, to deal with the causes which trigger migrations in the countries of origin. This requires, as a first step, the commitment of the whole international community to eliminate the conflicts and violence that force people to flee. Furthermore, far-sighted perspectives are called for, capable of offering adequate programmes for areas struck by the worst injustice and instability, in order that access to authentic development can be guaranteed for all. This development should promote the good of boys and girls, who are humanity’s hope.

Lastly, I wish to address a word to you, who walk alongside migrant children and young people: they need your precious help. The Church too needs you and supports you in the generous service you offer. Do not tire of courageously living the Gospel, which calls you to recognize and welcome the Lord Jesus among the smallest and most vulnerable.

I entrust all child migrants, their families, their communities, and you who are close to them, to the protection of the Holy Family of Nazareth; may they watch over and accompany each one on their journey. With my prayers, I gladly impart my Apostolic Blessing. 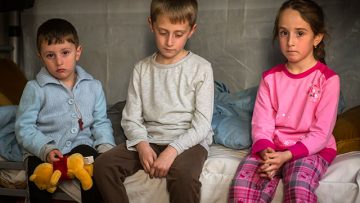 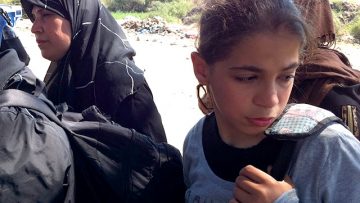 March from Italy to London – Solidarity with Migrants March