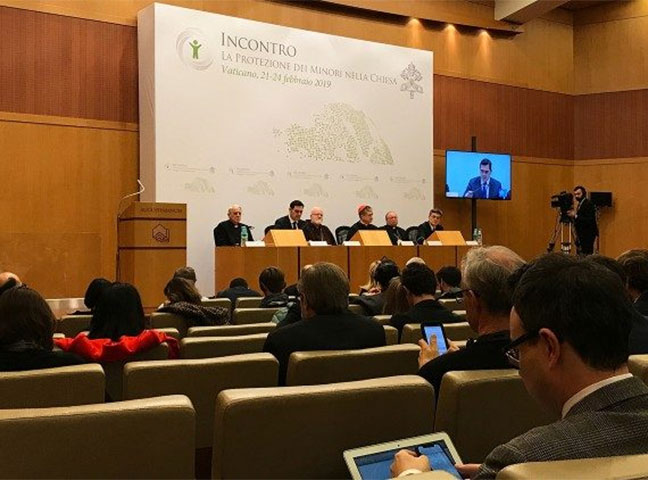 The Press Briefing began with the Moderator, Jesuit Fr Federico Lombardi, describing the “atmosphere” of the Meeting on “The Protection of Minors in the Church” as being “positive, constructive, useful, and necessary”.

He made a point of mentioning the cooperation between the Holy See and Marta Santos Pais, Special Representative of the UN Secretary-General on “Violence against Children”. This United Nations Office has already shared statistics and details on its own child protection efforts, and these were distributed among the Bishops in the Vatican on Friday.

Fr Lombardi also spoke of how the “21 Points” Pope Francis presented to the Bishops on Day One, have already become a basis for discussion and reflection within their working groups, as they try to put into practice the Pope’s call for “concrete” suggestions and results.

The Prefect of the Vatican Dicastery for Communication, Paolo Ruffini, provided summaries, first of the Plenary Sessions, and then of Thursday afternoon’s Working Groups. Issues arising in both included the importance of working together in a collegial manner, and of recognizing that abuse is a crime, regardless of the culture of any specific country. One out-take of the morning Session was that the Church’s commitment to applying rules and guidelines to protect minors has led to a decline in the number of abuse cases in many parts of the world. However, it was also stressed that discussing sexuality cannot be considered taboo, and needs to be dealt with as part of seminary formation.

Thursday’s small working groups engaged with a variety of issues, but focused on the need to prioritize victims and to work towards breaking the cycle that causes some who have been abused, to become abusers themselves. They also discussed the need to create combined task forces to assist smaller Churches with fewer resources.

Focusing on the victims

Cardinal Sean Patrick O’Malley, Archbishop of Boston, addressed the Press Briefing, affirming how “nothing is more important” than addressing this issue of protecting minors. He too spoke of focusing on the victims, and described his personal experience of meeting with abuse survivors as “life changing”. It is only when we meet with victims, said Cardinal O’Malley, that “Church leadership learns the havoc wreaked on peoples’ lives” by these experiences.

The Cardinal spoke of the need for “action plans” and, in this regard, he praised the “concrete ideas” behind the presentation of Cardinal Blase Cupich, the Archbishop of Chicago. He also confirmed the importance of involving lay people in order to help restore confidence in the Church.

Cardinal Cupich, for his part, added that meetings with victims “keep us focused”. Each story is unique, he said. The Cardinal said “ownership” of the issue, regarding responsibility, both by Bishops individually and as a body, is the “driving force” behind this Meeting on Protecting Minors in the Church. What happens in one place affects everyone, everywhere, he said. Cardinal Cupich also spoke of the importance of “strategy”: the Pope wants “concrete steps and outcomes”, he concluded.

Participation of the laity

During his intervention at the Press Briefing on Friday, Archbishop Charles Scicluna of Malta, referenced Cardinal Oswald Gracias’ speech on “Collegiality”. We are called to serve the Universal Church as Bishops, he said, and “we are accountable to our people”. The Archbishop also addressed the question of lay participation in the field of protecting minors: “The participation of the laity is not an optional, or an appendage, it is not an extra”, he said. Lay people are “fundamental to the well-being and to the ‘being’ of the Church”, he added, because “we are walking together”.