Protection of minors: Pastors need to touch, heal the wounds of victims 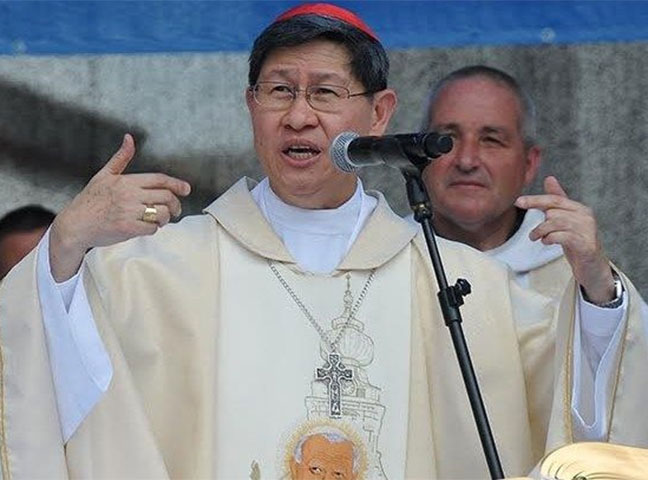 Cardinal Luis Antonio Tagle opened the 3-day Meeting on the Protection of Minors in the Church on Thursday in the Vatican, speaking about the need for pastors to know and feel the pain of abuse victims and heal their wounds.

The figure of the risen yet wounded Jesus is the inspiration and model for the clergy and bishops of how to heal the wounds of minors abused in the Church.

“The abuse of minors by ordained ministers has inflicted wounds not only on the victims but also on their families, the clergy, the Church, the wider society, the perpetrators themselves and the Bishops,” said Cardinal Luis Antonio Tagle in his presentation at the start of the 3-day Meeting on the Protection of Minors in the Church, that kicked off on Thursday in the Vatican.

“We humbly and sorrowfully admit, that wounds have been inflicted by us bishops on victims and in fact the entire body of Christ.”

He said that the bishops’ lack of response to the suffering of victims, even to the point of rejecting them and covering up the scandal to protect perpetrators and the institution “has injured our people, leaving a deep wound in our relationship with those we are sent to serve.”

The Archbishop of Manila said that people rightly point a finger at the pastors of the Church, who are called to have the “smell of the sheep”, but who run away when they find the “stench of the filth inflicted on children and vulnerable people” who they are supposed to protect.

In this regard, the cardinal drew attention to the encounter between the Risen Christ and Thomas, where Jesus insisted His disciple should touch His wounds.

“Each of us and our brothers and sisters at home,” Card. Tagle said, “must take personal responsibility for bringing healing to this wound in the Body of Christ and make the commitment to do everything in our power to see that children are safe in our communities.”

The Filipino cardinal noted that Jesus allowed himself to be wounded as he touched the wounds of the poor, the sick, tax collectors, women of ill repute, persons afflicted with leprosy, noisy children, outsiders and foreigners.”

“He was crucified because he loved these concrete persons who were themselves wounded by society and religion. By sharing in their weakness and wounds, he became a compassionate brother rather than a harsh judge.”

The 61-year old cardinal pointed out that wounds are often inflicted by the blindness of ambition and legalism and misuse of power that condemned an innocent person to die as a criminal.” He said we need to put aside any hesitation and to draw close to the wounds of our people because “only the wounds of love and compassion can heal.”

If we want to be agents of healing, we have to see and touch the wounds of others, which are Christ´s wounds in the wounded people. The denial of wounds and death leads to the death of others and to our own death.

Cardinal Tagle explained that justice alone cannot heal the broken heart of survivors of abuse. “If we are to serve the victims and all those wounded by the crisis,” he said, “we need to take seriously their wound of resentment and pain and the need for healing.” Resentment can be like a disease, that slowly and steadily infects people, until their enthusiasm and energy are gone. With increasing stress, they are prone to “heightened anxiety and depression, lowered-self-images, interpersonal conflicts that arise from the inner brokenness.”

Regarding the issue of asking the victims to forgive, Card. Tagle said it does not mean they should just let it all go, excuse the abuse and just move on. Forgiveness, he said, is one powerful and even scientifically supported pathway for eliminating pain and resentment in the human heart.

We as the Church should continue to walk with those profoundly wounded by abuse, building trust, providing unconditional love, and repeatedly asking for forgiveness in the full recognition that we do not deserve that forgiveness in the order of justice but can only receive it when it is bestowed as gift and grace in the process of healing.

Card. Tagle, who is president of Caritas Internationalis, pointed out that sometimes bishops and religious superiors are tempted, and even pressured at times, to “choose between victim and perpetrator”. But a focus on justice and forgiveness shows that both need attention.

Victims need to be helped to express their deep hurts and heal from them. Perpetrators need to be served justice, helped to face the truth without rationalization, and not neglect their inner world.

Learning from the Risen Lord and his disciples, the cardinal said, we look at and touch the wounds of victims, families, guilty and innocent clergy, the Church and society. “Beholding Jesus wounded by betrayal and abuse of power, we see the wounds of those hurt by those who should have protected them.”