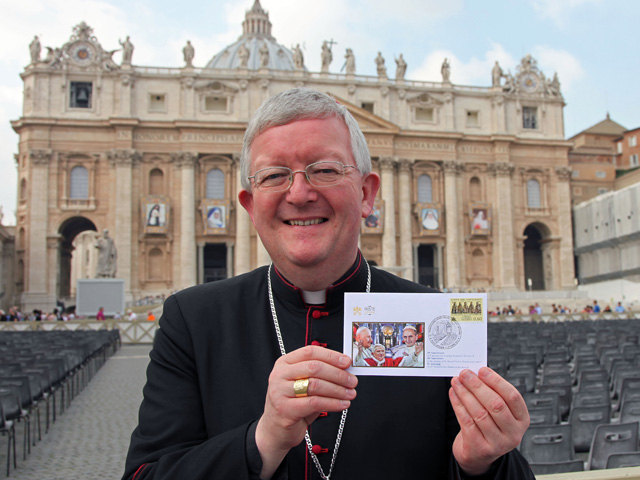 The Vatican Post office has issued an attractive special commemorative cover to mark the 50th anniversary of the Opening of the historic Second Vatican Council on Thursday, 11 October 1962.

The 0.60 euro value postage stamp (the internal letter rate in the Vatican and Italy) used on the cover was issued on 4 November 2009 to mark the 50th Anniversary of the Convocation of the Second Vatican Council.

The stamp is a reproduction of a bronze panel of the Door of Good and Evil in St Peter’s Basilica. The panel was created by Italian sculptor Luciano Minguzzi, who made the artwork between 1970 and 1977.

The attractive ‘Poste Vaticane, 11 Ottobre 2012’ special hand cancellation includes a contemporary drawing of what the inside of St Peter’s Basilica looked like 50 years ago on 11 October 1962.

The front of the cover depicts Pope John XIII, who on 25 January 1959, during a visit to the Benedictine Abbey of St Paul Outside the Wales, Rome, announced his decision to convene an Ecumenical Council of the Catholic Church.

Three years later Pope John opened the Vatican Council that brought together Cardinals, Archbishop and Bishops from all over the world to examine a wide range of issues relating to the life of the Catholic Church.

John XXIII did not live to see the outcome of the Council. He died in the Vatican on 3 June 1963.

The Vatican Council, that has brought many important changes to the Catholic Church, concluded on 8 December 1965 during the Pontificate of Paul VI, who is also shown on the cover.

One of the young priests who attended the Vatican Council as a theological consultant was Father Joseph Ratzinger, who came from Bavaria in Germany. Years later, on 19 April 2005, Cardinal Joseph Ratzinger was elected Pope following the death of Pope John Paul II. He chose the name Benedict XVI.

On Thursday morning, Thursday, 11 October 2012, Pope Benedict XVI – shown on the cover – presided at the celebration of Mass, in St Peter’s Square, on the occasion of the 50th Anniversary of the Opening of the Second Vatican Council.

The Most Reverend Bernard Longley, Archbishop of Birmingham, a Synod Father, at the International Synod of Bishops in Rome, 7-28 October, pictured in front of St Peter’s Basilica, Rome, holding the special Vatican commemorative cover issued on 11 October 2012.