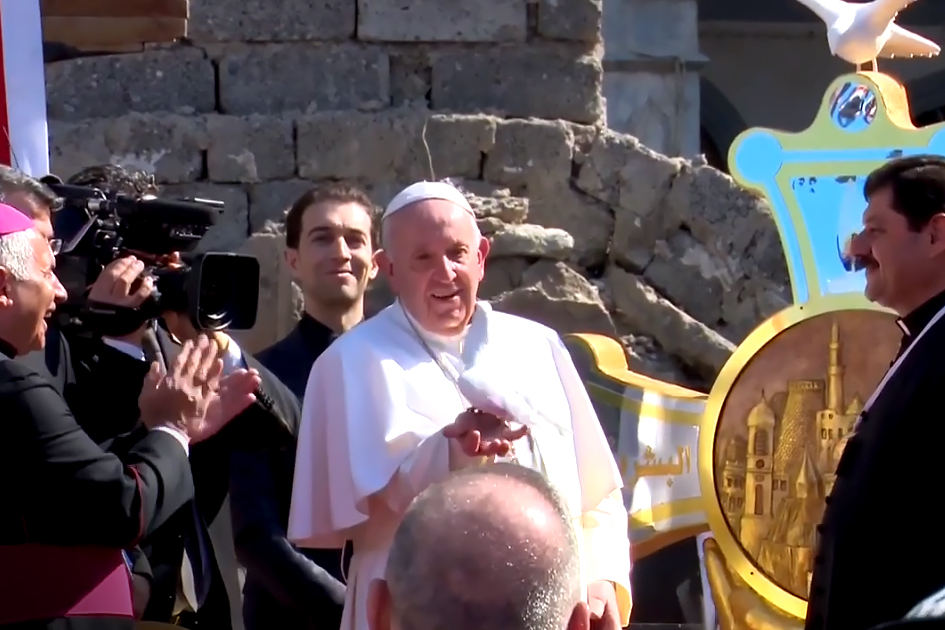 On Sunday morning, the last full day of his historic visit to Iraq, Pope Francis arrived at the Hosh al-Bieaa centre in Mosul where he prayed, amidst the ruins and along with the people of Iraq, for all the victims of war in the country and throughout the entirety of the Middle East.

Before addressing the small crowd gathered amongst the ruins of the four churches outlining the meeting, Pope Francis was greeted by the Archbishop of Mosul, Najeeb Michaeel. He then heard the testimony of a Catholic priest and a Sunni, victims of the terror that rampaged through the city of Mosul.

Before his prayer, the Pope shared three thoughts:

Then, the Holy Father invited those present, near or far, to “join in praying for all the victims of war”, and for ourselves, he added. “May all of us – whatever our religious tradition – live in harmony and peace, conscious that in the eyes of God, we are all brothers and sisters”, he said.

Pope Francis then went on to recite his prayer. He prayed to God that “From beyond the sea of suffering and death, from beyond all temptations to violence, injustice and unjust gain” he might accompany his sons and daughters with a Father’s tender love.

He noted that we have “often forgotten your counsels of peace and harmony” and at times shown indifference. After a brief moment of silence, the Pope went on to ask: “teach us to realise that you have entrusted to us your plan of love, peace and reconciliation, and charged us to carry it out in our time, in the brief span of our earthly lives”.

He concluded his prayer praying both for the deceased and for “those who caused such harm to their brothers and sisters”. May they repent, he added.

The Hosh al-Bieeya (Church Square) in Mosul holds the ruins of four Christian churches, referred to by the Pope in his prayer. The four churches of the ancient Christian community were destroyed by the so-called Islamic State. In Mosul alone there are over 30 churches that have been completely destroyed. None of them have been rebuilt yet.

The city has been subjected to systematic devastation and this has led to the destruction of, among other things, numerous churches, the mausoleum of ‛Awn ad-dīn, Nabī Yūnis (the mausoleum of the prophet Jonah) and a section of the walls of the site of Nineveh, as well as that of rare manuscripts and more than 100,000 books preserved in the Library, archaeological finds and numerous statues in the collections of the Nineveh Museum.

In June 2017, Islamic State, encircled by government forces, and with control of the old city alone, destroyed the mosque of Mūr ad-dīn, the place symbol of the Caliphate, which, however, a few days later was recaptured by the Iraqi army along with a part of the medieval area of the city.

In July 2017, after nine months of fighting, Mosul was liberated.

Most High God, Lord of all ages, you created the world in love and never cease to shower your blessings upon your creatures. From beyond the sea of suffering and death, from beyond all temptations to violence, injustice and unjust gain, you accompany your sons and daughters with a Father’s tender love.

Yet we men and women, spurning your gifts and absorbed by all-too-worldly concerns have often forgotten your counsels of peace and harmony. We were concerned only with ourselves and our narrow interests. Indifferent to you and to others, we barred the door to peace. What the prophet Jonah heard said of Nineveh was repeated: the wickedness of men rose up to heaven (cf. Jonah 1:2). We did not lift pure hands to heaven (cf. 1 Tim 2:8), but from the earth there arose once more the cry of innocent blood (cf. Gen 4:10). In the Book of Jonah, the inhabitants of Nineveh heeded the words of your prophet and found salvation in repentance. Lord, we now entrust to you the many victims of man’s hatred for man. We too implore your forgiveness and beg the grace of repentance: Kyrie eleison! Kyrie eleison! Kyrie eleison!

Lord our God, in this city, we see two signs of the perennial human desire for closeness to you: the Al-Nouri Mosque, with its Al-Hadba minaret, and the Church of Our Lady of the Hour, whose clock for more than a century has reminded passers-by that life is short and that time is precious. Teach us to realize that you have entrusted to us your plan of love, peace and reconciliation, and charged us to carry it out in our time, in the brief span of our earthly lives. Make us recognize that only in this way, by putting it into practice immediately, can this city and this country be rebuilt, and hearts torn by grief be healed. Help us not to pass our time in promoting our selfish concerns, whether as individuals or as groups, but in serving your loving plan. And whenever we go astray, grant that we may heed the voice of true men and women of God and repent in due time, lest we be once more overwhelmed by destruction and death.

Eternal rest grant unto them, O Lord, and let perpetual light shine upon them. May they rest in peace. Amen.