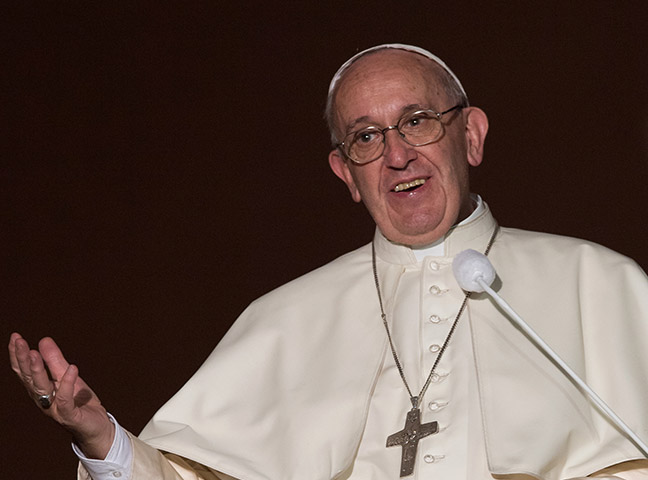 The Holy Father, Pope Francis, has delivered the forth Christmas message of his pontificate Urbi et Orbi on the Solemnity of the Nativity of the Lord, 25 December 2016.

Today the Church once again experiences the wonder of the Blessed Virgin Mary, Saint Joseph and the shepherds of Bethlehem, as they contemplate the newborn Child laid in a manger: Jesus, the Saviour.

On this day full of light, the prophetic proclamation resounds:

“For to us a child is born,
To us a son is given. And the government will be upon his shoulder;
and his name will be called “Wonderful Counsellor, Mighty God,
Everlasting Father, Prince of Peace.” ( Is 9:6)

For this reason, the birth of Jesus was accompanied by the angels’ song as they proclaimed:

Today this message goes out to the ends of the earth to reach all peoples, especially those scarred by war and harsh conflicts that seem stronger than the yearning for peace.

Peace to men and women in the war-torn land of Syria, where far too much blood has been spilled.  Above all in the city of Aleppo, site of the most awful battles in recent weeks, it is most urgent that assistance and support be guaranteed to the exhausted civil populace, with respect for humanitarian law.  It is time for weapons to be still forever, and the international community to actively seek a negotiated solution, so that civil coexistence can be restored in the country.

Peace to women and men of the beloved Holy Land, the land chosen and favoured by God.  May Israelis and Palestinians have the courage and the determination to write a new page of history, where hate and revenge give way to the will to build together a future of mutual understanding and harmony.  May Iraq, Libya and Yemen – where their peoples suffer war and the brutality of terrorism – be able once again to find unity and concord.

Peace to the men and women in various parts of Africa, especially in Nigeria, where fundamentalist terrorism exploits even children in order to perpetrate horror and death.  Peace in South Sudan and the Democratic Republic of the Congo, so that divisions may be healed and all people of good will may strive to undertake the path of development and sharing, preferring the culture of dialogue to the mindset of conflict.

Peace to women and men who to this day suffer the consequences of the conflict in Eastern Ukraine, where there is urgent need for a common desire to bring relief to the civil population and to put into practice the commitments which have been assumed.

We implore harmony for the dear people of Colombia, which seeks to embark on a new and courageous path of dialogue and reconciliation.  May such courage also motivate the beloved country of Venezuela to undertake the necessary steps to put an end to current tensions, and build together a future of hope for the whole population.

Peace to all who, in different areas, are enduring sufferings due to constant dangers and persistent injustice.  May Myanmar consolidate its efforts to promote peaceful coexistence and, with the assistance of the international community, provide necessary protection and humanitarian assistance to all those who gravely and urgently need it.  May the Korean peninsula see the tensions it is experiencing overcome in a renewed spirit of cooperation.

Peace – not merely the word, but a real and concrete peace – to our abandoned and excluded brothers and sisters, to those who suffer hunger and to all the victims of violence.  Peace to exiles, migrants and refugees, to all those who in our day are subject to human trafficking.  Peace to the peoples who suffer because of the economic ambitions of the few, because of the sheer greed and the idolatry of money, which leads to slavery.  Peace to those affected by social and economic unrest, and to those who endure the consequences of earthquakes or other natural catastrophes.

Peace to the children, on this special day on which God became a child, above all those deprived of the joys of childhood because of hunger, wars or the selfishness of adults.

Peace on earth to men and women of goodwill, who work quietly and patiently each day, in their families and in society, to build a more humane and just world, sustained by the conviction that only with peace is there the possibility of a more prosperous future for all.

To you, dear brothers and sisters, who have gathered in this Square from every part of the world, and to those in various countries who are linked to us by radio, television and other means of communication, I offer my greeting.

On this day of joy, we are all called to contemplate the Child Jesus, who gives hope once again to every person on the face of the earth.  By his grace, let us with our voices and our actions give witness to solidarity and peace.  Merry Christmas to all!