Pope Francis in his own words 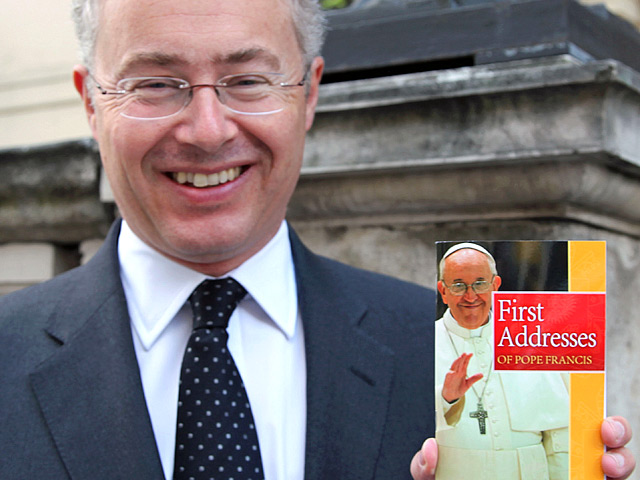 Vatican » » Pope Francis in his own words

A significant amount has been written and broadcast about Pope Francis since his dramatic election as the 265th Successor of St Peter, the Bishop of Rome, the Supreme Pontiff, the Head of the Vatican City, and leader of the world’s 1.2 billion Roman Catholics, on Wednesday, 13 March 2013.

The CTS has just published an essential 105-page booklet ‘First Addresses of Pope Francis’. Now there is an opportunity to read, pray about and reflect carefully on his own words in this compilation of the simple yet profound key addresses and homilies.

‘First Addresses of Pope Francis’ has an insightful 2,500 word introduction by leading Catholic journalist, writer and broadcaster, Peter Jennings, Press Secretary to the Most Reverend Bernard Longley, Archbishop of Birmingham, which captures the immediacy and excitement of the historic election of the first Pope from Latin America, the first Jesuit Pope, and the first to take the name Francis after St Francis of Assisi.

Archbishop Bernard Longley gave an enthusiastic welcome to the publication. He said:

“I congratulate the Catholic Truth Society on the imagination and understanding that it has shown in gathering together the First Addresses of Pope Francis delivered by the Holy Father during the first two months of his pontificate. They offer us the earliest indications of Pope Francis’ priorities and his sense of the Church’s mission. They also give us uplifting insights into the humanity and spirituality of our new Holy Father.”

The Archbishop of Birmingham, a Member of the Pontifical Council for the New Evangelization, added:

“The personal reflections of Peter Jennings, which preface this useful volume, highlight the feelings of surprise and delight which many of us shared on hearing the news that we had a Pope from South America.

“This little booklet will always be a memento of the early days of Pope Francis’ ministry and will encourage us to pray for the Holy Father as he serves the Church with such a generous heart.”

“With the prayers, support, encouragement and goodwill of millions of ordinary Catholics throughout the world, the Holy Father, Pope Francis, the simple Shepherd chosen by God, will lead and teach us to embrace the New Evangelization and proclaim the Gospel of Jesus Christ with humility and boldness in a way that is relevant and personally involving to those searching for real meaning and purpose in their lives today.”

“Much, already, has been written about Pope Francis. We all think we know him. This booklet encourages us to step back from the commentary and return to what Pope Francis actually said in the first few weeks of his Pontificate. One of the things I have learned since taking up my appointment as Ambassador to the Holy See is that everyone has an opinion, but few take care to study the original source.”

catholicnews.org.uk/papal-transition
You can visit our section on the Papal Transition to reflect on those dramatic weeks a the end of February, start of March 2013