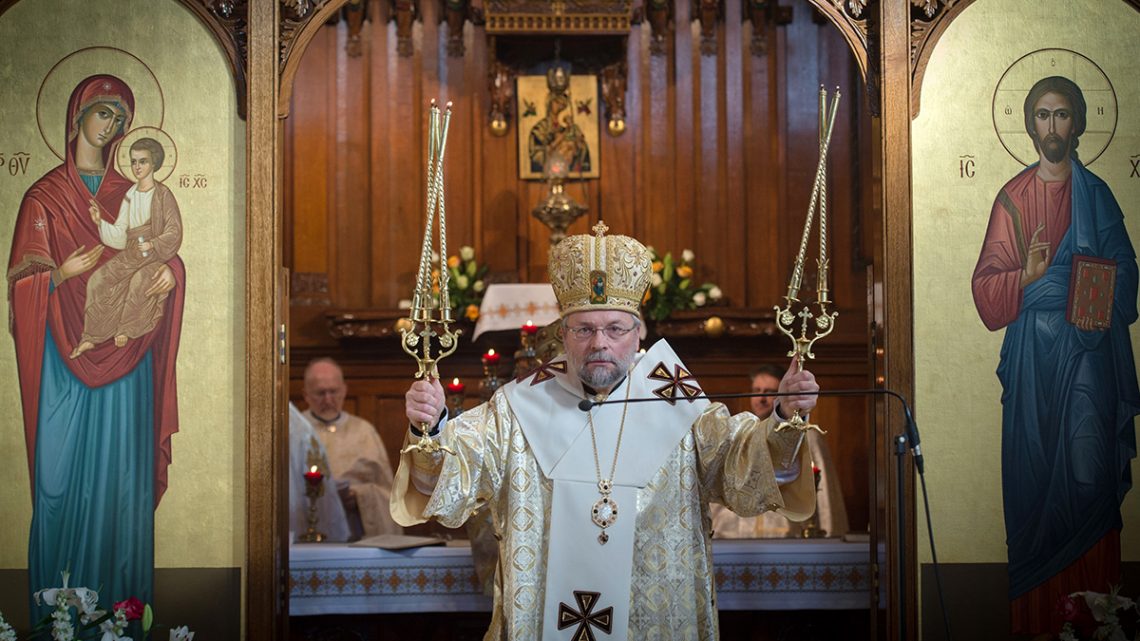 “The authority of a bishop is not the strength of his power, but the power of his willingness to serve.” Bishop Hlib Lonchyna.

The Holy See announced, on Sunday, 1 September 2019, that Pope Francis has accepted the resignation of Bishop Hlib Lonchyna from the pastoral leadership of the Holy Family Ukrainian Catholic Eparchy of London.

Following the announcement, Bishop Hlib summed up his years of service in Great Britain as well as his plans for the future.

How would you summarise 10 years of ministry in Great Britain and Ireland? What has changed? What has developed differently and what has remained the same?

In 2009 I was appointed Apostolic Administrator of the Exarchate of Great Britain, then the Synod of Bishops of the Ukrainian Catholic Church elected me Exarch. Later the Synod asked Pope Benedict to raise our two exarchates – of Great Britain and France – to the dignity of Eparchy (diocese). This happened in 2013. I see this as a great blessing for the organisational and pastoral development of the London Eparchy, which in these years has become dear to me.

I envisioned my main task as being not in administration, but in pastoral care for our faithful in Great Britain, as well as in Ireland, where I have served as Apostolic Visitor since 2004.

In Great Britain there are two waves of migration: post-World War Two and contemporary; the latter predominantly being in search of employment. These are two diverse groups of people whom I strived to bring together and help them to integrate in the larger community so that they support one another and work together. My instruments have been quite simple: homilies, spiritual talks, confession, conferences, and just meeting people.

What is the Church like in this part of the world? Who attends our churches?

The London Eparchy of the Holy Family covers all Great Britain, that is, the island that contains England, Wales, and Scotland. As I mentioned before, there are two waves of migration. The post-war emigration was numerous, counting around 30 thousand, and people settled across the entire island. Thus, our parishes were scattered throughout the whole of Great Britain – from Scotland in the north to England in the south. Our Church was organised quite nicely. Our people did not build their own churches as they had not the means. Instead they bought churches, mainly Anglican ones, and later adapted them to the needs of our rite. There were different cultural and educational organisations. This is the reality here in the United Kingdom.

By the 1990s many people of the first migration had passed away. Unfortunately, their children and grand-children left the Church for various reasons.

In the last 70 years our parishes grew smaller. Then in the 1990s and 2000s people from Ukraine began arriving and filling up our churches. However, they usually settled in larger cities where there is employment, especially London. Our cathedral parish is comprised mainly of the new émigrés. In other cities there are not many new-comers, and you can see this reflected in our congregations.

Today we have around 30 pastoral centres, 10 of which are full-fledged parishes, and the other 20 are missionary points where not many people attend Liturgy – which is not even celebrated every Sunday.

How does this new wave of migration affect pastoral work? What challenges do bishops and priests face?

Pastoral work outside of Ukraine, where people do not live nearby as they had in the homeland, is very different. We see people mainly on Sundays, as they are scattered and constantly busy, because they have come here to seek employment. So, our pastoral work is limited to those few hours when the people are available. This requires of us more concentration – we need to fit our pastoral plan into that one Sunday. This is a challenge for priests who must focus on the needs of the people who come to them, serving them the best they can.

What is the reason for your decision to leave the ministry of eparchial bishop?

Last year our Synod of Ukrainian Bishops appointed me to spearhead a committee for the revision of liturgical texts and this year the Holy Father entrusted me to be Apostolic Administrator of the Paris Eparchy of Saint Volodymyr, since Bishop Borys, the former Eparch, was transferred to the metropolitan see of Philadelphia. This gave me two huge responsibilities which were added on to my main obligations to the London Eparchy. I also have other commitments for which I must travel, mostly to Rome and to Ukraine.

For the last few months I have been striving to fulfil my obligations but concluded that I cannot do justice to all. My faithful in the Eparchy of London need stability and care. The bishop should provide for the eparchy, visit parishes, be with the people 100%.

For its own good the eparchy needs a bishop who will serve our people on both islands. Therefore I asked the Holy Father and he has graciously released me from my duties towards the London Eparchy of the Holy Family.

What are your feelings as you depart? What are you going to miss? How will you uphold contact with the faithful for whom you were and remain a spiritual father?

I had a good relationship with the priests and in every parish I found people who truly seek God and cherish the visits of their pastors. I will miss such direct contact with our faithful.

I was always glad to see how parishes and organisations collaborate to preserve what our parents have left us. This shows there is a healthy spirit amongst our faithful, which I support with gratitude.

I have spent 10 years in Great Britain. This is the longest I have ever been in pastoral ministry in one place and will miss the people with whom I have developed a spiritual bond.

How do you envision the new bishop for the eparchy?

He must, first, be a man of prayer who will intercede for his priests, religious and faithful before God. He needs to be pastorally minded, open to people and sincerely desire to serve them. He should not fear challenges but be ready to offer his time and energies to interact with people, visit even the most distant parishes, support his priests and develop pastoral areas. The bishop should love his priests and be a father to them.

The bishop should also cherish our rite and our traditions.

Of course, he must master the English language because the bishop is a member of the Catholic Bishops’ Conference of England and Wales and has regular meetings with the local bishops. We also maintain contacts with the Syro-Malabars, who are Eastern Christians from India. They too have an eparchy in England, as do we Ukrainians.

Summing up, I would say we need spirituality, openness and hard work.

What will happen to the Paris Eparchy where you are Apostolic Administrator?

I shall be in that temporary position until our Synod chooses a new bishop and the Holy See assents to his election. In the Paris Eparchy I shall strive to upkeep and develop everything that Bishop Borys Gudziak has built up in the six years he was there.

But at the same time your episcopal ministry does not end. How will it look from now on?

I have already occupied numerous roles as bishop in our Church, so a change is nothing new to me. I served in Italy, Spain, as curial bishop in Ukraine; as a priest I served in my Studite monastery, in St Nicholas Parish in Passaic, NJ, worked as attaché in the Apostolic Nunciature in Kyiv, was spiritual director at the Lviv Seminary and taught there, as well as at the Lviv Theological Academy and other institutes of higher learning. I have always looked at these forms of service as one whole in pastoral ministry. I am united to the end of my life to all these people whom I have served, encountered, worked with – I carry them all in my heart and in my prayers. Wherever I am in the world, they will always be dear to me.

Allow me a somewhat indiscreet question: what does episcopal authority mean and what does it mean to relinquish it voluntarily? The world, both contemporary and past, is just obsessed with power. Where do you find the strength to overcome this?

The authority of a bishop is not the strength of his power, but the power of his willingness to serve. If I do not serve the faithful, then power will be useless – even if it is the greatest on earth. I do not relinquish an office to search for prestige or comfort, but wish the best for this eparchy. I have prayed and contemplated for quite some time on what would best serve my eparchy and my faithful. And I believe that after 10 years I should depart and allow others to take on this responsibility so the eparchy may grow and prosper. 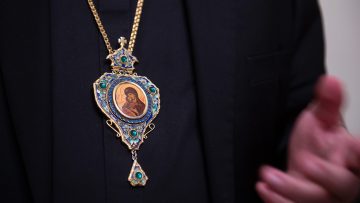 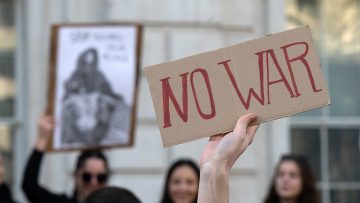 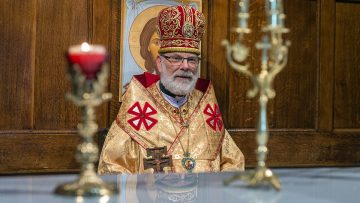 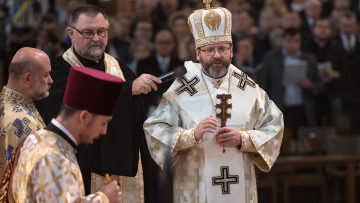 We need prayers, calm and support, says Ukrainian Catholic Bishop of the Holy Family of London