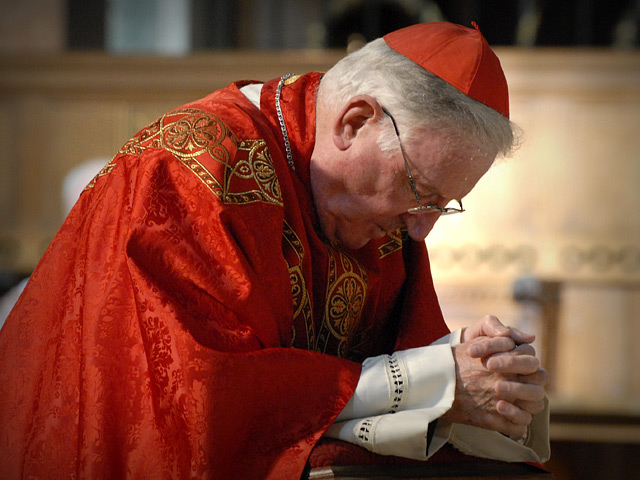 On Sunday 10 March, Cardinal Cormac Murphy-O’Connor visited the priests in training at the Beda and English Colleges – the seminaries in Rome training priests for the dioceses of England and Wales.

His Eminence celebrated Mass and asked the seminarians to pray hard for a new pope:

“These are special days when we pray for the Cardinals who are going into conclave, we don’t know who they will choose. I don’t know!”

“We are living in extraordinary days that will never be repeated, with the resignation of a pope and the waiting for a new Peter.”

“In his last audience, Pope Benedict XVI told us how he felt like St. Peter in the boat with many days of sunshine and abundant catches and other days when the waters were rough and stormy. Yet the Lord has always been in the boat, it is his – he won’t let it sink. The Lord is with his Church until the end of time.”

“Peter brings unity to the Church: But why do we need Peter? In Peter we have examples of faith, hope and love. The Church is somehow incomplete without Peter. We pray to the Lord that he will give us another Peter and he will. ‘You are Peter and on this rock I will build my Church.'”

catholicnews.org.uk/papal-succession
Our section on the Papal Succession