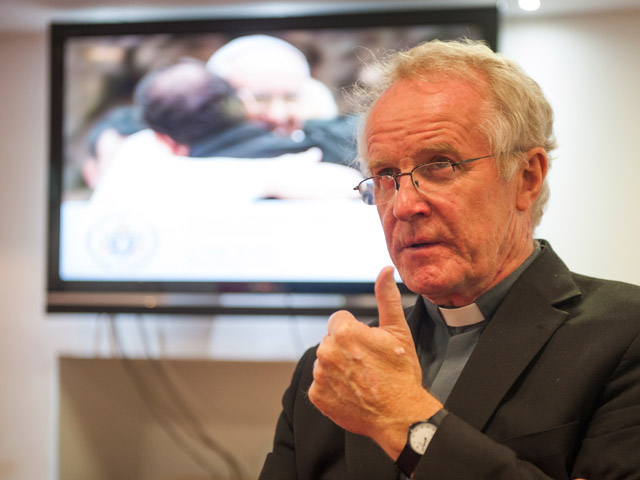 CBCEW » Home Mission » » Bishop for mission leads drive to a...

The bishop who oversees the work of mission in England and Wales is calling for every parish to prioritise reaching out to the estimated four million baptised Catholics who rarely or never attend Mass.

Rt Rev Kieran Conry is Chair of the Bishops’ Department for Evangelisation and Catechesis and said: “An important focus of the work of evangelisation in England and Wales is ministry and outreach to the estimated four million non-churchgoing, sometimes called ‘lapsed’, Catholics. While the lapsation of baptised is not new within the Catholic community, the worry and anxiety experienced by parents, siblings and grandparents of non-churchgoing baptised, is deep and heartfelt. We all hold in our hearts at least one person in our family who seems disconnected from the life of the Church. I therefore encourage you to use the materials being offered to invite those closest to you to re-connect with their faith and their local parish, mindful that this is not an ‘us’ and ‘them’ model of ministry, but that we are all in need of deepening our relationship with Christ.”

He added: “If there are people who want to come into our Catholic churches, I would say that you are most welcome. I am sure that there are people who lost contact with the Church long ago, and now, with all the changes that have happened, might feel too shy to come back in, afraid to embarrass themselves by doing the wrong thing. I would say to them, don’t worry, come in and see. Sit at the back and do what the rest do. You might be pleasantly surprised.’

His comments come as the Catholic community nationally is being invited to celebrate Home Mission Sunday on 15 September, which is an annual day of prayer and celebration for the work of evangelisation. This year’s theme is ‘Crossing the Threshold: Ministry and Outreach to non-churchgoing Catholics’. Over 400,000 campaign leaflets have been distributed covering every parish and religious house. This area of the Church’s work has been chosen in response to requests from all tiers of the Catholic community for it to be resourced and prioritised.

Most Rev Vincent Nichols, President of the Catholic Bishops’ Conference of England and Wales, said: “Announcing the good news in deed and word is the task of each of us as followers of Jesus. We do so, even in the midst of our daily tasks, whenever we behave with compassion, with ready forgiveness and with generosity towards those in need. When we are seen to act in this manner of Jesus, then we may well make others wonder, at least a little, why we do so. We should be ever ready to put into words, simply and directly, the reasons for our behaviour – the truth of Jesus whom we know and love. Home Mission Sunday reminds us just how important the work of evangelisation is. We are all called to be attentive to the ways that we can ‘Cross the Threshold’ by reaching out to those closest to us, to the stranger and to those most in need of our help.”

In support of this initiative, with partners, the Department for Evangelisation and Catechesis has: set up a national core group for ministry and outreach to non-churchgoing Catholics; offered a national tour covering the five church ‘Provinces’ of England and Wales; commissioned new ‘Films of Faith’ video materials (produced in partnership with CaFE) featuring former non-churchgoing Catholics; begun a research project to explore how parents who send their children to Catholic schools can be encouraged to connect with parish life; ensured that free resources to support parish outreach are gradually being published online; started a parish-based pilot project in Nottingham Diocese.

The next step is to develop resources by Lent 2014 to support people to seek and receive the Sacrament of Reconciliation (Confession), informed by an informal telephone survey of cathedrals about Confession that was conducted in August 2013.

David, 45, from Liverpool, is one of the former non-churchgoing Catholics featured in one of the new ‘films of faith’ and said: “I was baptised but wasn’t brought up a Catholic. When I got married and my wife and children went to church and received Holy Communion I felt deeply that I was missing out. So I made a resolution to do something about it. I now feel complete.”

For more information about Home Mission Sunday and the ‘Crossing the Threshold’ project please see:

To view the ‘films of faith’ please see:

22 Catholic cathedrals in England and Wales were telephoned and emailed on Wednesday 21 August.

The respondents were either Cathedral Deans, Priests-in-Residence, or designated staff members.There was a 91% response rate.

Observations made in relation to the increase in confessions being heard

The quotes inserted under each bullet point below are taken from survey respondents.

One respondent shared: “This summer there has been a marked difference in demand compared to last summer. There has been an increase. We don’t usually offer confessions in August but have done this year.”

“I’m observing more interest in the Catholic Church. There has been more interest in people wanting to become Catholics being brought by existing Catholics.” And another: “After the Easter Sunday Mass one woman said, ‘I feel proud to be a Catholic again.’”

“…especially during Holy Week this year there was increased demand. We had a very good Reconciliation Service in Holy Week where we did observe an extra 25% that came along and a lot of people who came were lapsed. They hadn’t been to confession for a number of years and suddenly they felt the urge to come.”

“There is definitely an increase in lapsed seeking confession since the election of Pope Francis.” Another said: “I think very often those who have been away from the sacrament for a long time are very often surprised and delighted to find it such a positive and affirming experience. People just recently, who were expecting to struggle, or be met by an indifferent response from the priest, were struck how their experience was completely different. It is one of the many positive signs concerning the sacrament.”

“People are coming and saying that they are sorry that they don’t know what to say because it might have been 20 years since their last confession.” Another said: “Some people are coming in saying I don’t know what to say or do because they haven’t been since they were at school or for 30 years, and are asking for help with the words to say.” Another: “People seem to have a fear about the formula of prayers to say and so priests try to put people at ease.”

“There are people coming back who have not received the sacrament for years. People have been away from confession for a considerable period and we had a lot of younger adults coming.” Another said: “A lot of them are in their twenties and thirties and that was the most noticeable thing.”

“Numbers are increasing for Mass, particularly, mid-week Masses are going up as well as Sunday Masses.”

“There was a surge after Pope Benedict’s visit and an increase since Pope Francis’ election which has maintained.”

“…due to its position in Central London and it serves a large number of workers and tourists for whom the Cathedral is not their parish. There is always a queue. In a normal week there is always a priest hearing confessions Monday-Friday 11.30-6pm, Saturday 10.30-6.30pm, and Sunday 11-1pm and 4.30-7pm, meaning they offer 45 hours per week. Popular devotions, such as the first Friday, and holy days of obligation see an increase in demand. In Holy Week this year we advertised 45 hours of confessions… which represented 103 priest-hours. This was nowhere near enough to cope with demand.”

Reasons given for the increase in confessions

Some of the bullet points are quotes from respondents.

“Certainly since Pope Francis, people seem more sympathetic (people outside) to the Catholic Faith. Pope Francis seems to be talking their language and there is a good connection there.” Another said: “Positive media reporting about Pope Francis.” A different respondent said: “A lot of people are coming back to his Church because they feel Pope Francis is a hands on kind of man, approachable.” Another: “The Pope preached on it (confession) and inspired people making it more accessible.”

“There has been a Papal bounce!” Another said: “The election of Pope Francis has brought a great sense of hope and enthusiasm. I also think that it has brought great confidence as the Pope engages so easily with people and has made such a huge impact in so short a time. It also reflects on the humility and faith of Pope Emeritus Benedict whose visit to Britain had such a profound effect and was a great success.”

Comments about the times that it is most demanded

“Just before Easter and Christmas”

“Across the board including Easter”

“New increase in demand during the summer months”

“Specific to the Pope’s visit” 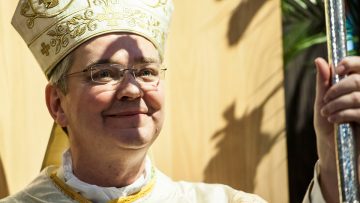 Hold on to the gift of joy this Home Mission Sunday