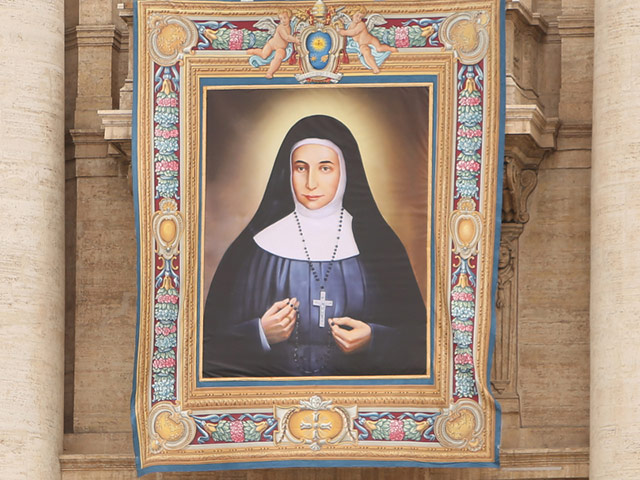 CBCEW » News and Media » » Two Palestinian nuns made saints by...

Pope Francis has canonised two 19th century nuns from Palestine – Sister Marie-Alphonsine Danil Ghattas, founder of the Sisters of the Most Holy Rosary of Jerusalem, and the discalced Carmelite Maryam Baouardy – Mary of Jesus Crucified.

The women are the first Palestinian saints in modern times.

The Mass of Canonisation, on Sunday 17 May, was attended by by cardinals and bishops from around the world and included a delegation of 2,124 people from the Palestine territories and Jordan headed by the Latin Patriarch of Jerusalem, Fouad Twal.

The Palestinian president Mahmoud Abbas was also present having met the Pope the day before – the Holy Father describing him as an “angel of peace” – as were a number of prelates from Lebanon, Iraq, Morocco, Tunisia, Egypt, Libya and Cyprus.

Pope Francis paid tribute to Sister Maryam Baouardy in his homily drawing reference to her gentle faith and bridge-building with Muslims:

“Poor and uneducated, she was able to counsel others and provide theological explanations with extreme clarity, the fruit of her constant converse with the Holy Spirit. Her docility to the Spirit also made her a means of encounter and fellowship with the Muslim world.”

“Sister Marie Alphonsine Danil Ghattas came to understand clearly what it means to radiate the love of God in the apostolate, and to be a witness to meekness and unity. She shows us the importance of becoming responsible for one another, of living lives of service one to another.”

Speaking ahead of the Mass, Fr Rifat Bader, director of the Catholic Centre for Studies and Media in Amman, Jordan, described the canonisations as a sign of hope for the men and women of the Middle East:

“[The canonisations are] a message of solidarity and encouragement to the Christians of the Holy Land, especially for those in all other Middle East countries, to those who have been forcibly displaced and deported from their home countries, and to all those who suffer persecution, and whose persecutors sometimes think that by killing they are offering a sacrifice to God, as Jesus Himself warned.”

You can download the Pope’s full homily below or by using the link to the right of this page.