Time is running out for youth of the Middle East 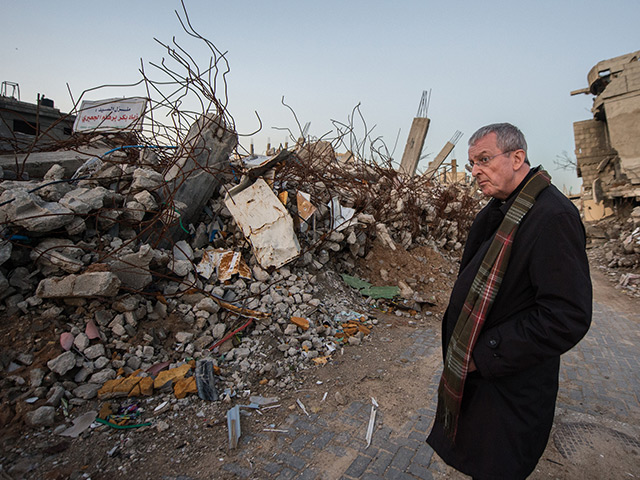 The following article was originally published on the Catholic Universe.

“We don’t have work, we don’t have money, we don’t have education. Life here has stopped.” These were the heart-breaking words of Fadi, a young man from Mosul, but they could equally have been spoken by any of the Iraqi and Syrian refugees we met in Jordan last month.

To its immense credit the Jordanian government has opened its doors to over one million people, meaning refugees now make up almost a quarter of the population. And the local Church has stepped up with unprecedented support, alongside other faith groups and international NGOs. But the sheer scale of this crisis means that while people’s immediate needs for rudimentary shelter, food and basic healthcare are largely being met, opportunities to begin properly rebuilding their lives are scare.

Refugees in Jordan have no right to work and little access to formal education. Time after time we met motivated and determined people who have been forced into a cruel trap of dependency and inactivity. Those who once worked as doctors, shop owners, or engineers now face endless empty days with no prospect of returning home and very limited chances to start afresh in a new country.

Young people are being hit particularly hard. Before Daesh stormed their way into his city Fadi was studying Agriculture and Forestry at Mosul University. He had a bright future ahead of him, but since fleeing to Jordan has had no opportunity to complete his education or find employment. It is a story shared by a generation of young Iraqis and Syrians who have escaped with their lives but have been robbed of their life chances.

Things are even harder for those suffering psychological distress from the horrors they experienced. In Amman we visited a Caritas centre where professional mental health support is in high demand and it is often the young who are most severely affected. One father explained how his eight year son lost the ability to speak after a bomb exploded next to their car as the family was fleeing Iraq. Such acute trauma is shockingly widespread among children throughout the Middle East and will clearly have consequences for years to come.

One hundred miles away we met young people in Gaza whose future is also in jeopardy, here because of Israel’s enduring and unjustifiable blockade. At Gaza City’s Holy Family Parish Father Mario da Silva fittingly described the territory as one large prison, and the disastrous impact of growing up in such an environment is clear.

Last year the World Bank announced that by cutting Gaza off from imports, exports and international trade, the blockade has strangled its economy and driven unemployment up to a higher level than anywhere else in the world. At the same time people are prevented from leaving, meaning that regardless of their qualifications and drive, Gaza’s youth are trapped with almost no opportunities to realise their potential. The articulate and motivated graduates we spoke to wanted nothing more than to build a better future for themselves and their community. But denied that chance, they face only worsening poverty and the threat of further conflict.

Unsurprisingly the blockade has also taken a toll on young people’s mental health. According to the Centre for Mind-Body-Medicine in Washington, around one third of Gaza’s children showed signs of post-traumatic stress disorder even before the bombs stated falling in 2014. The harrowing accounts we heard from people who’d seen their homes destroyed and friends killed during those seven weeks reveal the deep scars left by that conflict. And while the ceasefire is currently holding most people in Gaza believe it is only a matter of time before fighting resumes.

Against such adversity it would be easy to give up. Worse still there is the ever present threat that young people’s despair will ultimately give way to hatred. All too often in conflicts around the world we have witnessed a toxic combination of resignation and resentment among those who have had their lives torn apart and their futures thrown into disarray. But in the Middle East last month we also saw signs of enduring hope and many of the young people we met demonstrated positivity and courage that defied their circumstances.

Instead of succumbing to despair in the face of blockade and bombings, the inspirational young volunteers at Gaza City’s YMCA have built a sanctuary from the surrounding poverty and violence, which is valued by the entire community. Every day they coach sports, lay on activities for the elderly and run classes for their peers. “This place gave me so many skills and ideas”, one volunteer told us “I want to share those with others”.

Despite their effective imprisonment and the dire levels of unemployment, young adults in Gaza are also constantly striving to improve their education. The university students we met still spoke about their studies with genuine excitement and enthusiasm.

And in Jordan we were treated to a Christmas concert by young refugees who, unable to work or attend school, had thrown themselves into music classes run by the local Church. This beautiful occasion was tinged with the underlying struggles they face and the uncertainty of their future, but the passion demonstrated that they have not yet lost all hope.

How long this will last is unclear. While we should praise resilience among the youth, we must also remain acutely aware that the threat of a lost generation is real and growing. Ultimately they will have no future without greater opportunities in the Middle East, more chances to resettle abroad, better mental health support for those suffering trauma, an end to oppressive policies such as the blockade, and most importantly of all, real progress towards lasting peace.

None of these things will come easily but they must come soon, because for the young men and women of the Middle East time is running out.