Silver Jubilee of the Diocese of Menevia 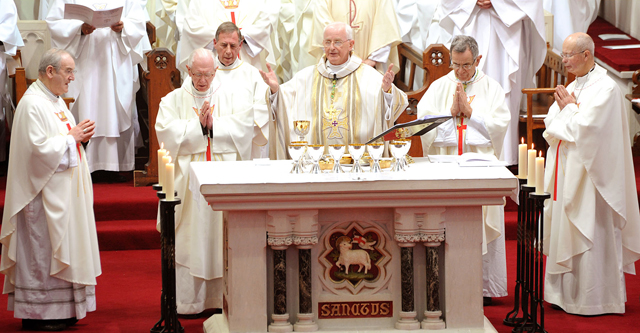 CBCEW » » Silver Jubilee of the Diocese of Me...

This year, 2012, the Diocese of Menevia celebrates its 25th year. A number of events and celebrations have been planned to give thanks to God for the rich and vibrant Christian Community in south west Wales.

On Monday 19 March, a Mass was celebrated in St Joseph’s Roman Catholic Cathedral, Convent Street, Swansea to mark its 25th anniversary as a Cathedral, when the old dioceses in Wales were restructured to form the present dioceses of Cardiff, Menevia and Wrexham.

The Papal Nuncio, Archbishop Antonio Mennini, Cardinals Cormac Murphy-O’Connor and Keith O’Brien, along with most of the bishops of England and Wales were in attendance. So too, were representatives from other faith communities and every parish in the Diocese of Menevia.

The Abbot of Belmont, the Rt Rev Paul Stonham, gave a homily focusing on the history of the Catholic Church in Wales. It concluded with a call to be joyful, to keep the faith and to do the little things in love:

“Wales and her people long to hear the Gospel preached today and, through the gift of the Holy Spirit, Christ has empowered all of us to preach his Gospel effectively, not from church pulpits but by the integrity of our lives, if we but do what St David asked of us: be joyful, keep the faith and simply do the little things that will bring others to Christ. Amen.”