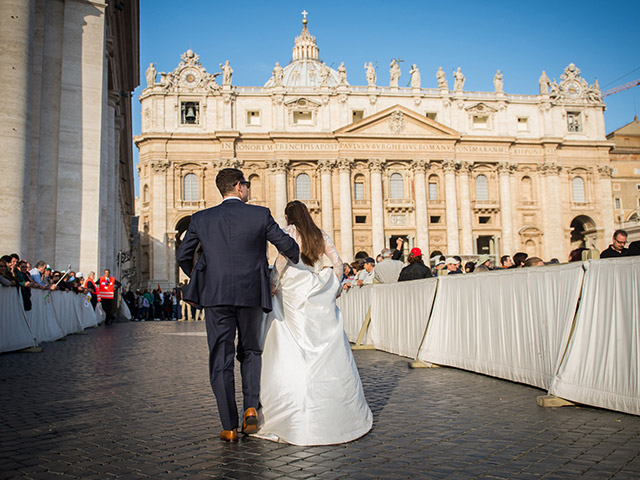 As discussion at the Extraordinary Synod of Bishops on the Family got underway Monday morning, it was announced that the second phase of this process, next year’s Ordinary Synod, will be held 4 – 25 October 2015, and will have theme: The vocation and mission of the family in the church and the modern world.

Following the announcement the General Rapporteur, Cardinal Peter Erdő, presented the mid-term report outlining the main questions highlighted over the past week of General Congregations which will now be examined in by the bishops, fraternal delegates, auditors and experts in the ‘minor circles’ or small working groups.

Cardinal Erdő began by highlighting that the Synod Fathers spoke of how Jesus looked at men and women with love, accompanying them patiently and with mercy. He spoke of how Jesus Christ, “the Truth, became incarnate in human fragility not to condemn it, but to heal it”. Jesus – he said – taught marriage was indissoluble, but showed understanding of those who didn’t live up to this ideal.

In the mid-term report the Synod Fathers speak of how it’s the task of the Church to recognize those seeds of the Word that have spread beyond its visible and sacramental boundaries. They appeal to the “law of graduality,” as a reflection of the way God reached out to humanity and led His people forward step by step.

The need was noted for further reflection on whether sacramental fullness doesn’t exclude the possibility of recognizing positive elements even in imperfect forms. For example, whether there are positive elements in irregular marriages. The Synod Fathers make the point that when a civil marriage is stable, shows deep affection and care for children, then the Church should work to accompany it toward Sacramentality.

Cardinal Erdő spoke of the need for a missionary conversion, that the Church cannot stop at an announcement that is merely theoretical, but must go beyond. Christian marriage has to be a vocational decision taken with the proper preparation in an itinerary of faith. This because the Gospel of the family is the response to the deepest expectations of a person.

In the report the Synod Fathers state that the Church is particularly called to recognize suffering of abandoned spouses and how children are the real victims of family breakups.

Many synod members expressed the need for reformed, simplified procedures for annulments Cardinal Erdő spoke of how this annulment reform will require diocesan bishops to take on new responsibilities and perhaps delegate a specially trained priest.

Regarding divorced and divorced and civilly remarried Catholics, the report speaks of the need for “courageous pastoral choices” and “new pastoral paths”. The report calls for case-by-case discernment according to law of graduality, particularly regarding access to the Sacraments, Cardinal Erdő said dialogue on this topic will continue in local Churches over the coming year and responses will be brought to next years Synod.

The report noted that the question of cohabitation might indicate commitment-phobia, but also a choice that is taken “while waiting for a secure existence” such as a steady job and income.

The question of homosexuality was then addressed, with a call to serious reflection. The Synod Fathers noted that homosexual persons have gifts and talents to offer the Christian community and that pastoral outreach to them is an important educative challenge.

In the report, the Synod Fathers also reaffirm that same-sex unions cannot be considered equal to matrimony. And it is unacceptable that pressure be brought to bear on pastors or that international bodies make financial aid dependent on the introduction of regulations inspired by gender ideology.

Finally, stating that openness to new life is essential part of married love, the Synod Fathers affirm the message of Paul VI’s Humanae Vitae regarding the need to respect dignity of person in moral evaluation of methods of birth control.

Concluding his presentation of the mid-term report, Cardinal Erdő said that in imitating Jesus’ merciful gaze, the Church must accompany her most fragile sons and daughters marked by wounded and lost love.

Here you can download the full text of the mid-term report.