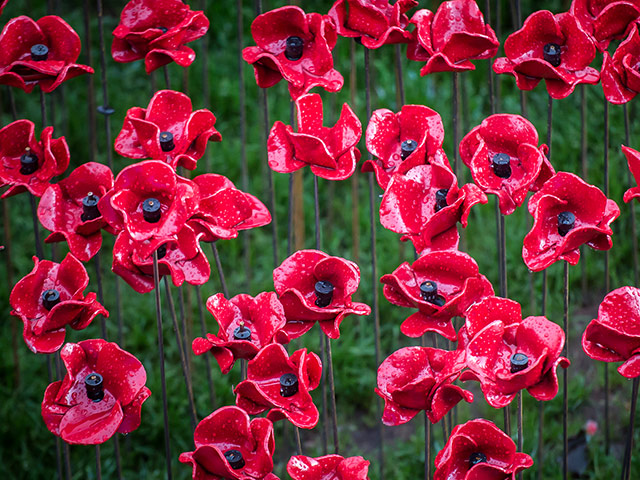 Remembrance Sunday falls on the Sunday nearest Armistice Day, 11 November, which marks the end of the First World War.

It’s particularly poignant this year as commemorations mark the 100 year anniversary of the start of World War One.

On this day we remember all those who gave their lives for their country, all who suffered and died through acts of war and those who were left behind to grieve and mourn.

In England and Wales one Mass for the Dead may be celebrated on this Sunday.

O God, merciful and strong,
who crush wars and cast down the proud,
be pleased to banish violence swiftly from our midst
and to wipe away all tears,
so that we may all truly deserve to be called your children..

The Catholic Bishop of the Forces, the Rt Rev Richard Moth, gave us a reflection on the painting ‘Last General Absolution of the Munsters’ by Italian war artist Fortunino Matania – a man noted for his extraordinary finish and detail and to achieve this he visited the Western Front on many occasions.

The painting shows Rev. Father F. Gleeson, Chaplain to the 2nd Royal Munster Fusiliers, on horseback somewhere on the Rue du Bois in Northern France on the Western Front.
Fr Gleeson gave absolution to 500 men on 8 May 1915 ahead of the Battle of Aubers Ridge that took place at 5:30am the following morning.

You can watch the video on Vimeo.

Prayer of the Faithful

One of the following may be used or adapted according to local needs:

Explore how the texts of the Sunday could be used to speak about the hope of resurrection.

Remember to pray for those who serve in the Armed Forces through the year.