Relic of Pope St. Clement I goes on display in Westminster Cathedral 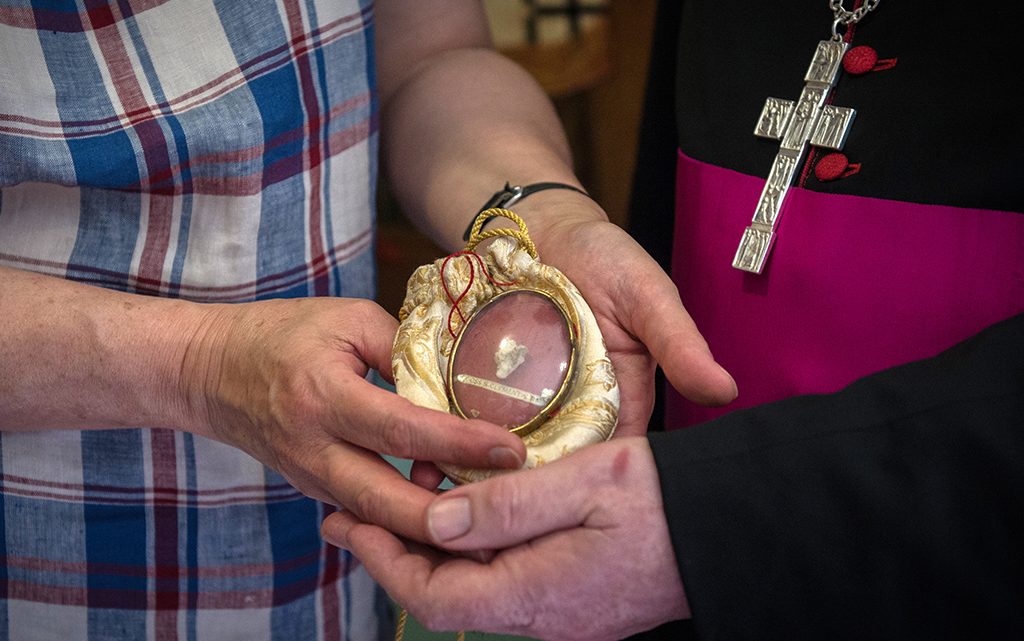 The relic of first century Pope St. Clement I discovered in a waste disposal warehouse in East London was returned to the Catholic Church yesterday, 19 June. It will go on display in the Treasures of Westminster Cathedral exhibition.

James Rubin, the owner of Enviro Waste, found the relic on one of his lunchtime walkabouts around the warehouse. He put out a call online to find the relic an appropriate home and “after about one hundred and fifty, two hundred responses, it just stood out from the e-mails that we needed to return it back to Westminster Cathedral.”

Who was Pope Clement?
“St. Clement is a very important figure in the life of the Early Church. Pope from the year 90 to the year 101, Pope St. Clement was arrested if you like by the Emperor Trajan because he was too successful in preaching the Christian Gospel and Trajan decided ‘get this man out of Rome and put him into exile in a very very distant part of the Empire’ we would call it Ukraine. So Clement was exiled to the Ukraine and eventually he was martyred there by drowning, and one of the symbols of Pope St. Clement is he is portrayed with an anchor because he had an anchor weighed around his neck.” Archbishop George Stack, Chair of the Patrimony Committee

“This is probably the most remarkable story coming out of the waste industry right now” – James Rubin.
“We don’t know exactly where it came from because we just ended up with this in our warehouse and it was a strange one because at lunchtime, I tend to walk around the industrial estate and go into the warehouse where we have a range of furniture and electronic waste and I happened to see that on the side on someone’s desk and I thought ‘that’s a bit strange, that doesn’t really belong in the hands of a waste company’.”
James Rubin, owner of Enviro Waste

“People are intrigued by relics” – Archbishop George Stack
“There is a tremendous living connection with our forefathers and mothers, going back to the days of St. Clement, the Mass used to be celebrated on the tombs of those who have given their lives for the faith. So that constant tradition, a living tradition of holding our forebears in veneration as an inspiration to people today as we try to follow, not the path of martyrdom necessarily, but certainly the witness that they gave.”
Archbishop George Stack, Chair of the Patrimony Committee

How do we know it is for real?
“The label hand written in capital letters ‘EX OSS S.CLEMENTIS P.M.’ probably standing for proto martyr. The dome of the reliquary is held in place by a red thread which is crossed at the back and is sealed with a seal that can be identified either as that of a cardinal or an archbishop. As I speak now with the most recent intelligence Catholic historians, it is a question of how many tassels are attached to the hat. The seal is of course in red wax and so the hat appears to be red, if it was an archbishops hat, it would be green. There are fifteen tassels, the coat of arms of a cardinal has fifteen tassels so that indicates that the coat of arms once identified would help us to date the piece, which we believe is probably as early as the seventeenth century and the cardinal represented was responsible for authorising the production of smaller relics from a principle bone of the saint and distrusting the relics. So we don’t know where this was first received but one suggestion is the fact that the Basilica San Clemente in Rome is the home of the Irish province of the Dominicans and so there may be an Irish connection.”
Dr Tessa Murdoch FSA, Deputy Keeper of Sculpture, Metalwork, Ceramics and Glass, Victoria & Albert Museum

The relic is the personal belonging of someone who wishes to remain anonymous. It appears that it was one of a number of items stolen from a car in Central London. It is being donated to the Treasures of Westminster Cathedral exhibition. St. Clements’ feast day takes place on November 23rd.

A press briefing was held yesterday, 19 June, at Clergy House behind Westminster’s Catholic Cathedral to explain how a relic of an early Pope – St Clement I – was discovered in rubbish collected in central London and given to Westminster Cathedral to form part of its Treasures exhibition.