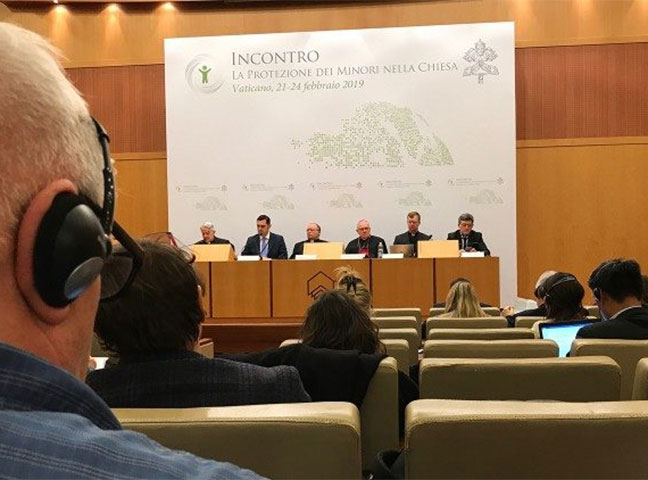 The Prefect of the Vatican Dicastery for Communication, Paolo Ruffini, was the first to address the packed press gathering that included journalists from all over the world. He began by providing a summary of the morning’s interventions: the first by Cardinal Luis Antonio Tagle, Archbishop of Manila, and the second by Archbishop Charles Scicluna, Adjunct Secretary of the Congregation of the Faith; and of the Question & Answer sessions that followed.

Starting on the right foot

According to the Moderator, Fr Federico Lombardi, SJ, the “Protection of Minors” Meeting “started on the right foot” on Thursday morning because it touched on all the vital key words. He identified these as: “Listening”, “Synodality”, “Concreteness”, “Parrhesia” (an ancient Greek word meaning “to speak with courage”), “Conversion”, and “Purification”.

Fr Lombardi then referred to the “21 Points” Pope Francis presented to participants at the start of the morning’s deliberations. These Points were later referred to as “a roadmap” for the Bishops’ discussions, providing them with “concrete proposals” to help them go forward. Archbishop Scicluna subsequently clarified how these were not to be considered “decisions” on the part of the Pope, so much as “reflections” to help guide the Bishops both during this meeting and when they return home.

Among the points that received particular attention, is Pope Francis’ suggestion to raise the minimum age at which girls can marry from 14 to 16 (the same as that for boys, according to Canon Law).

The “sacred ground” of listening

Archbishop Scicluna began his intervention by expressing how moved he was by listening to the testimonies of the victims and survivors at the start of the Meeting in the Synod Hall on Thursday morning. More than once he stressed the importance of “listening”, saying it is like being on “sacred ground”: listening to victims but, in this case, also to his “brother Bishops” who come from such a wide variety of cultural and geographical realities. The Archbishop recapped his own speech, which he had delivered to the Bishops during their morning plenary, summarizing its key themes of “prudence”, “good practice”, and “working together”. “We cannot leave Bishops alone”, he said. In this regard we also need to “empower the community” to assist and support especially those Bishops who live in areas where they have little access to resources, experts, or personnel.

Most importantly, Archbishop Scicluna spoke of how vital it is for the Church to move “from a culture of silence, to a culture of disclosure”. We have to “face and address misconduct”, he said, “getting it right from the beginning”.

A journey of exploration

The Archbishop of Brisbane, Australia, Mark Coleridge, described the first morning session as a “journey of exploration”, saying it was quite different from any Synod he had ever attended. He spoke of an “energy” and “eagerness” by participants to engage with the issue. “We listened to God, to survivors, and to each other”, he said. The Archbishop added how much he appreciated the very different presentations of Cardinal Tagle and Archbishop Scicluna, summing them up in two words: “Vision” and “Tactics”. “We need both”, he said.

Fr Hans Zollner SJ, is a member of the Organizing Committee. He began by thanking the survivors and victims for their testimonies, in which, he said, “nothing was spared” insofar as the testimonies were “searing, brutal, and honest”. Fr Zollner recalled how, after listening to the voices of the victims, representing all continents and different languages, participants sat for a full two minutes in absolute silence. Legal norms, and enforcing accountability are not enough, concluded Fr Zollner, unless they are accompanied by what he called “heartfelt commitment”.