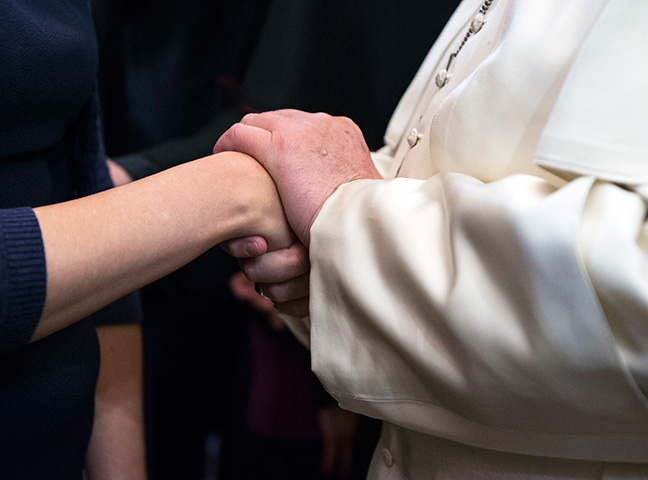 Six survivors of sex abuse by members of the Church shared their stories with Pope Francis on Monday in what the head of the Vatican press office described as moments of “profound spiritual encounter”. The three men and three women from the UK, Ireland and Germany attended Mass with the Pope at his Santa Marta residence and had breakfast with him, before spending a total of almost three and a half hours in a series of private conversations.

At the end of the Pope’s morning meetings with sex abuse survivors, Fr Federico Lombardi said the six victims appeared ‘profoundly moved’, but also ‘positive and serene’. Responding to journalists’ questions, he said each survivor spent about half an hour with the Pope, after which they expressed “gratitude and deep emotion” that their stories had been listened to with such attention. Far from being a public relations event, as some survivors’ support groups have suggested, Fr Lombardi said he hoped these important encounters would be the beginning of a road towards healing and reconciliation:

While he gave no details about their identity or the kind of abuse they’d suffered, Fr Lombardi said the three men and three women arrived in the Vatican on Sunday afternoon and had a first opportunity to meet with the Pope over dinner at his Santa Marta residence. Early on Monday, accompanied by a friend or relative and members of the new Pontifical Commission for the Protection of Minors, they listened as Pope Francis expressed his sorrow for the “sins and grave crimes of clerical sexual abuse” they had all endured.

Speaking in his native Spanish, Pope Francis begged forgiveness, not just for those who he said behaved like “a sacrilegious cult”, betraying their mission and profaning the very image of God, but also for the sins of omission of Church leaders who did not respond adequately to reports of sexual abuse. The Pope praised the courage of those who spoke up and “shed light on a terrible darkness in the life of the Church”. He said he would not tolerate harm done to a minor by any individual and he said bishops must “foster the protection of minors and they will be held accountable”.

Pope Francis said the “despicable actions” of abusers not only violates the innocence of children but also leaves “deep and often unrelenting emotional and spiritual pain and even despair”. He expressed his heartfelt sorrow and love for all those families who have had to deal with addiction, relationship breakdown and even suicide as a result of sexual abuse. He thanked the survivors for coming to meet him personally, saying their presence speaks of “the miracle of hope which prevails against the deepest darkness”. He asked them to pray for him, that he and the whole Church may find the grace to weep, to feel ashamed and to make reparation for those who abused such innocent people.