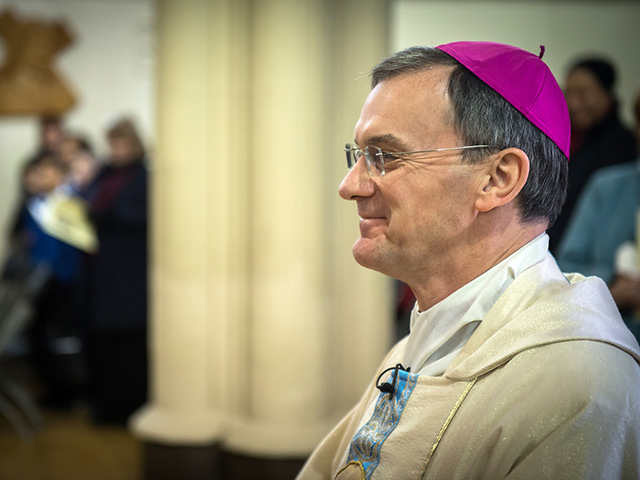 Bishop John Arnold was ordained Priest in July 1983 and after completing further studies in Rome he was appointed to Westminster Cathedral as a chaplain with responsibilities for the Westminster Hospital in 1985.

In 1989 he was appointed as Sub-administrator of Westminster Cathedral. In 1993 he became parish priest of Our Lady of Mount Carmel and St George in Enfield and remained there until 2001, when he was appointed as Chancellor and Vicar General of the Archdiocese.

Bishop Arnold was appointed as an Auxiliary Bishop of the Archdiocese of Westminster on 3 February 2006, with responsibility for the pastoral care of the deaneries of Barnet, Brent, Enfield, Haringey, and Harrow.

On hearing of his appointment, Bishop Arnold, Bishop-elect of Salford said:

“I accept the appointment as Bishop of Salford with much trepidation but will do all I can to serve the people, priests, and religious of the Church of this Diocese as we all seek to respond to Pope Francis’ call to be ‘missionary disciples’.

“I have much to learn in this new experience, after thirty-one years of priesthood spent entirely in Westminster. On leaving Westminster I would like to give thanks for all that I have received, most especially from the three Cardinals under whom I have served and the many people from all walks of life who have encouraged me in my ministry.

“I am very pleased to join with so many others in offering thanks and gratitude to Bishop Terence Brain for his leadership and shepherding of the Diocese with the hope that all the good work may be progressed.

“And I ask for prayers, that this diocesan family may journey together with determination and vision in faith and good works. I ask your prayers.”

“For many years Bishop John Arnold has been a faithful and devoted priest in the Diocese of Westminster. He has served as assistant priest, parish priest, Vicar General and, for the last eight years, Auxiliary Bishop. In all of these roles he has won the admiration and deep esteem of us all.

“In the name of this Diocese, then, I rejoice in his appointment as the next Bishop of Salford, a major responsibility for which he is well suited. We shall miss him. His new Diocese, I know, will welcome him and quickly come to appreciate his many gifts, his profound dedication and his generous spirit.

“We will be keeping Bishop John very much in our prayers as he prepares to undertake this new ministry and throughout the years to come. We thank him most sincerely for all his immense contribution to the life of the Diocese of Westminster and assure him of our continuing support and affection.”

“I welcome Bishop John’s appointment by Pope Francis to be the next Bishop of Salford. He has great gifts to share with us and I have every confidence that he will be happy within the family of God of Salford diocese. And I have the same confidence that the priests and people of the diocese will welcome him so that together great things can be done for the glory of God.”

Details and the date of the Mass of Installation will be announced shortly.

The Diocese of Salford

The diocese has, at its heart, the city of Salford, a large industrial centre that neighbours Manchester. The two cities lie at the southern end of the Diocese, which stretches north into Lancashire, west towards Liverpool, south towards northern Cheshire, and east towards the Pennines. It is within the Ecclesiastical Province of Liverpool.

Right Reverend John Arnold
Bishop-elect of the Diocese of Salford

2001 appointed as Chancellor and Vicar General of the Archdiocese of Westminster.

2003 named as a Chaplain to the Papal Household.

Ordained as an Auxiliary Bishop of the Archdiocese of Westminster on 3rd February 2006, and assigned the TituralTitular See of Lindisfarne.

Other roles have included: assisting in the compilation of two books published by Cardinal Hume; “Light in the Lord” and “Towards a Civilisation of Love”. Having contributed to “AIDS: Meeting the Community Challenge”, he published “The Quality of Mercy, a fresh look at the Sacrament of Reconciliation” in 1993.

A member of the Bishops’ Conference Department for International Affairs; and Chair of CAFOD’s Board of Trustees: CAFOD is the Church’s official overseas Aid Development Charity; and a Trustee of Caritas Social Action Network: which coordinates social action within the Catholic Church in England and Wales.