Pope Benedict XVI has sent a message to young people gathering this weekend at Invocation 2010, a festival for 16-35 year olds who are looking at their life choices. There will be advice and time for reflection for those who may be thinking of becoming priests, religious sisters and brothers, nuns and monks. This national event is the first of its kind and runs from July 2 – 4 near Birmingham.

“His Holiness Pope Benedict XVI presents His special greetings to His Excellency, the Most Reverend Vincent Gerard Nichols, Archbishop of Westminster, to his brother Bishops, and to all those persons who are participating in Invocation 2010, the first national Vocations Discernment weekend for England and Wales, taking place at Saint Mary’s College, Oscott.

“Particularly during this period of preparation for the Apostolic Visit of the Holy Father, when this country has a special place in his thoughts and prayers, Pope Benedict XVI encourages all those present to continue to stay close to Our Blessed Lord as they strive to discern his will for their lives, and to put their trust in the power of the Holy Spirit who will give them the courage to say ‘Yes’ to the Lord’s invitation.

“His Holiness cordially imparts to all the participants in Invocation 2010 and to their families and loved ones a special Apostolic Blessing as a pledge of abundant graces from Our Blessed Lord.”

A statement by the Catholic Association for Racial Justice (CARJ)

Archbishop Nichols calls for a shared understanding of Human Dignity 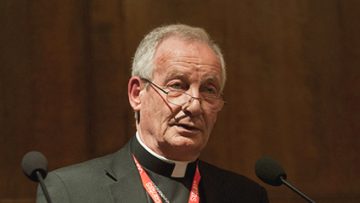