Ordination of Auxiliary Bishop of Westminster 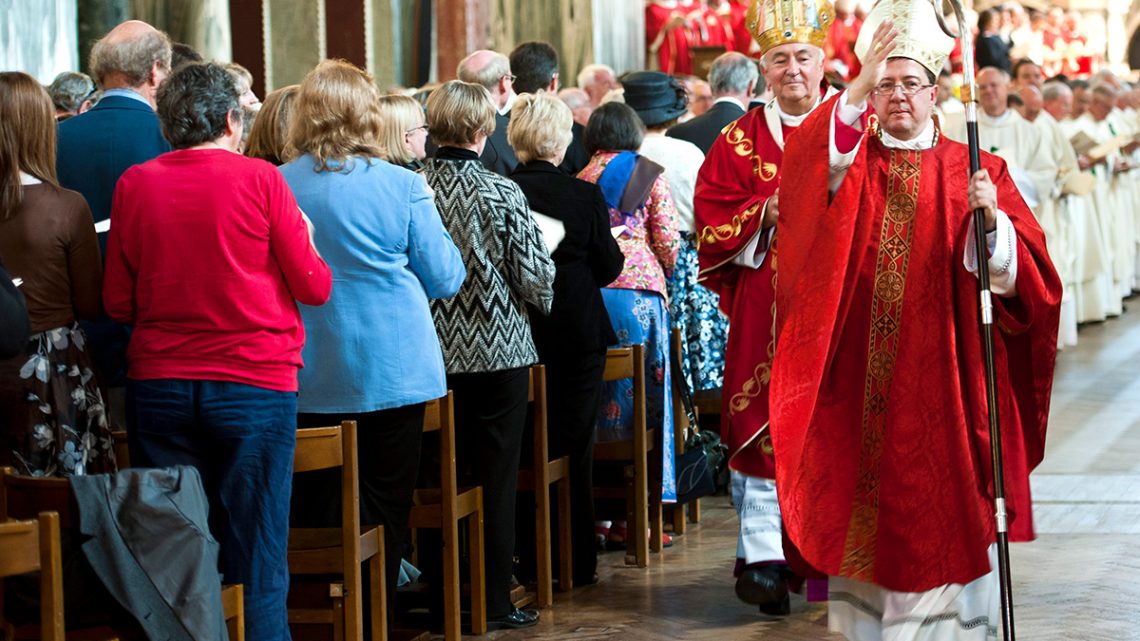 At a Solemn Mass held at Westminster Cathedral, today, Wednesday 14 September 2011, the feast of the Exaltation of the Holy Cross, the Right Reverend John Francis Sherrington was ordained Auxiliary Bishop of Westminster, assigned the titular see of Hilta.

Bishop John Sherrington will have responsibility for the pastoral care of Hertfordshire, consisting of the Deaneries of Lea Valley, St Albans, Stevenage and Watford. He will also be Chairman of the Diocese of Westminster’s Education Commission.

The first reading (Numbers 21: 4 – 9) was read by Amanda Dickie. The second reading (Philippians 2: 6 – 11) was read by Deacon Simon Gillispie from the Diocese of Nottingham. The Kyrie, Gloria and Agnus Dei from William Byrd’s Mass for Five Voices were sung by the Westminster Cathedral Choir.

Prior to his Ordination, Bishop Sherrington’s mitre, crozier and ring were carried by three servers from his former parish of the Good Shepherd in Nottingham.

The Most Reverend Vincent Nichols, delivered the Homily in which he recalled the celebration of Mass at Westminster Cathedral in September 2010. The Archbishop highlighted the essential task of a Bishop of forming and leading the faithful people of the Church to a deeper life of faith and of service.

The Archbishop of Westminster said:

You are the first bishop to be ordained in England and Wales since the wonderful Visit of His Holiness Pope Benedict XVI to the United Kingdom. In just four days time, it will be exactly one year ago that he celebrated Mass here in our Cathedral. Do you remember how, during his inspiring homily, he said: “The visitor to this Cathedral cannot fail to be struck by the great crucifix dominating the nave, which portrays Christ’s body, crushed by suffering, overwhelmed by sorrow, the innocent victim whose death has reconciled us with the Father and given us a share in the very life of God”?

The Pope invited us “to contemplate that great crucifix which rises above us”. “Our Lord’s hands, extended on the Cross,” he said, “also invite us to contemplate our participation in his eternal priesthood and thus our responsibility, as members of his Body, to bring the reconciling power of his sacrifice to the world in which we live.”

Significantly, the Holy Father highlighted first the indispensable role of the laity in carrying forward this mission of the Church. An essential task which you embrace today is that of forming and leading the faithful people of the Church to a deeper life of faith and of service. The more faithful you are to your Episcopal ministry, the more you will –and again I use the Holy Father’s words – “inspire all Christ’s followers to conform their every thought, word and action to Christ, and to work strenuously to defend those unchanging moral truths which, taken up, illuminated and confirmed by the Gospel, stand at the foundation of a truly humane, just and free society”.

And we are in need of such people, those who can, I quote, “speak convincingly of the liberating power of God’s word to a world which all too often sees the Gospel as a constriction of human freedom, instead of the truth which liberates our minds and enlightens our efforts to live wisely and well, both as individuals and as members of society.”

Bishop Sherrington was ordained a priest for the Nottingham Diocese in 1987 and has been parish priest for the Good Shepherd Parish in Nottingham for the past two years. In addition to various diocesan curial responsibilities, Fr Sherrington has also assisted the Bishops’ Conference of England and Wales on ethical issues and was a part of the working party for the Bishops’ Conference document ‘Cherishing Life’ (2005).

After graduating in 1980 with a degree in Mathematics from Cambridge University and two years working for Arthur Andersen Management Consultants London, in 1982 Fr Sherrington was accepted by Bishop McGuinness for the Nottingham Diocese and joined seminary at All Hallows in Dublin.

In 1990 he gained an STL in Moral Theology from the Gregorian University in Rome and lectured in moral theology at All Hallows in Dublin and then at St John’s Seminary in Wonersh, Guildford.

We have an Ordination photoset on our Flickr stream