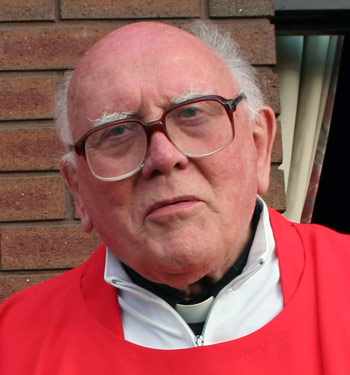 The Right Reverend Monsignor Canon Thomas Joseph Gavin, MA, one of the longest serving priests in the Archdiocese of Birmingham, died in Coventry’s University Hospital, during the early hours of Christmas Day 2009, after a short illness, aged 87.

Mgr Tom was Parish Priest of St Thomas More, Coventry, 1978-2004, where he will be remembered with great affection by parishioners and the wider community. Nationally and internationally Mgr Tom is acknowledged as the mastermind behind the successful Pastoral Visit of Pope John Paul II to Baginton Airport, Coventry, on Pentecost Sunday, 30 May 1982.

Two years earlier, Mgr Tom had the idea to use the airfield, situated in his parish, for the open-air Papal Mass during the historic first visit of a Pope to Great Britain. Despite the challenges and uncertainties leading up to the visit caused by the near-fatal shooting of Pope John Paul II in St Peter’s Square on 13 May 1981, and the Falklands War that started on 2 April 1982, the visit to Baginton Airport was a success. More than 350,000 pilgrims from all over the Archdiocese of Birmingham and beyond attended the Papal Mass. Access was not easy and some pilgrims, encouraged to arrive early, spent the night at the site.

During his homily Pope John Paul II said: “I cannot come to the Midlands without remembering that great man of God, that pilgrim for truth, Cardinal John Henry Newman. His quest for God and for the fullness of truth – a sign of the Holy Spirit at work within him – brought him to a prayerfulness and a wisdom which still inspires us today.”

Thomas Joseph Gavin was born in Coventry on 28 March 1922, and baptised at St Mary’s Church in Coventry. He attended St Mary’s Primary School and then Sacred Heart Primary School in Coventry. From an early age he desired to be a priest and so he embarked on his secondary education at Cotton College situated in North Staffordshire, a Catholic boarding school in the Archdiocese of Birmingham, also known as Saint Wilfrid’s College, where years later he was to be headmaster. At Cotton his passion for classics and for sport, especially rugby and cricket began to develop.

Fr Tom read Classics at Christ’s College, Cambridge, graduating in 1949. He spent a year, 1949-50, teaching at Ampleforth College, where he met a young Benedictine monk, Dom Basil Hume, later to be Cardinal Archbishop of Westminster. This was the start of a life-long friendship between them.
Hume was to visit Mgr Tom on two important occasions. The first at Cotton College in 1978 to mark Mgr Tom’s retirement as headmaster; and then to preach at the Mass for his Golden Jubilee at St Thomas More Church in June 1996. On each occasion Mgr Gavin ensured that Cardinal Hume arrived safely and swiftly by helicopter!

Fr Tom was appointed as Prefect of Studies at Cotton College in 1950. He became headmaster in 1967, a position he held with distinction, until he retired from teaching in 1978. Cotton College closed in 1987. Today, two of his former pupils, Terence Brain, and Kieran Conry, are serving the Catholic Church in England as Bishop of Salford, and Bishop of Arundel and Brighton respectively. Another pupil, David McGough, is Auxiliary Bishop of Birmingham. Throughout his twenty eight years at Cotton Mgr Tom made great strides in developing the curriculum, the school building and the provision for sport. He used his abilities as a former rugby international to inspire the boys to develop their skills on the rugby pitch, and his creation of a high quality running track to enhance their opportunities for athletics.

In 1978 Archbishop George Patrick Dwyer appointed Mgr Tom Gavin as parish priest of St Thomas More where he served the parish and worked tirelessly for 26 years until his retirement in 2004. There were many notable events and occasions during the years. Among them a special Mass of Thanksgiving to celebrate the Diamond Jubilee of his priestly ordination, on 22 June 2006, the Feast of Saints John Fisher and Thomas More. The Mass was attended by many friends, colleagues and former pupils, including the principal concelebrant, Bishop David McGough, Auxiliary Bishop of Birmingham, and Bishop Kieran Conry, also a son of Coventry. Bishop Leo McCartie, former Auxiliary Bishop of Birmingham, and Emeritus Bishop of Northampton, who taught on the staff at Cotton with Mgr Gavin, preached the sermon. Canon Garry Byrne, Catholic Dean of Coventry, gave a tribute to Mgr Gavin on behalf of the Catholics of Coventry.

At the time, Fr Timothy Menezes, who succeeded Mgr Tom as Parish Priest of St Thomas More in 2004, said: “This is a day of thanksgiving for all of us in the parish, and a day to marvel at all that Mgr Tom has achieved in his amazing 60 years as a priest.” Fr Menezes added: “Mgr Tom Gavin’s dedication and commitment to the Catholic Church in our parish and the Archdiocese of Birmingham is legendary. We thank God for this example of priestly ministry, especially in Coventry.”

Mgr Tom was appointed a Chaplain of Honour in 1969, and Prelate of Honour in 1978. He was installed as a Canon of the Metropolitan Cathedral of St Chad, Birmingham, during 1982. He served as Executive Secretary of the Diocesan Schools Commission, 1983-1992. He was the Founding Chairman of the Historic Churches and Art and Architecture Committees of the Archdiocese of Birmingham, 1992-2002. Under his careful guidance new schools and churches were built for the purpose of education and the worship of God and historic
church buildings were beautifully restored.

Tom Gavin played Rugby for Moseley, and London Irish. He represented Ireland in the 1948-1949 Season alongside Karl Mullen and Jack Kyle, gaining two caps, and winning the Triple Crown. Many years later, in the publication “Corinthian Days” – A Golden Age in Irish Rugby – that relives the 1947/48 and the 1948/49 seasons try by try, match by match, Mgr Tom Gavin tells of how various Archbishops argued over whether or not a Roman Catholic priest should play for Ireland. In January 1999 the team met up to celebrate the fiftieth anniversary of their historic win recalling the joy of their triumph.

Though frail, Mgr Tom was a concelebrant at the Mass of Installation of Archbishop Bernard Longley, as the Ninth Archbishop of Birmingham, at the Metropolitan Cathedral and Basilica of St Chad, Birmingham, on 8 December 2009, Feast of the Immaculate Conception.

Archbishop Vincent Nichols, who served as Archbishop of Birmingham, 2000-2009, said: “I was very sorry to hear the news of the death of Mgr Tom Gavin. We had greeted each other cheerfully at St Chad’s Cathedral on 8 December when he was excited at the arrival of Archbishop Bernard Longley.”

The Archbishop of Westminster added: “Tom’s heart was always with the Church which he loved and served so faithfully.”

Archbishop Bernard Longley said: “I pray for Mgr Gavin whom our Lord called to his eternal reward on Christmas Day. I thank God for his generous and fruitful service over many years and his faithful witness as a priest.” The Archbishop of Birmingham added: “I also thank those who have cared for Mgr Gavin over recent years. May he see the light on the face of Christ.”

Mgr Tom Gavin’s longtime colleague and friend Bishop Philip Pargeter retired Auxiliary Bishop Emeritus of Birmingham, who worked on the teaching staff of Cotton College, 1959-1985, said: “At Cotton, both as an inspiring teaching of classics and a hard-working first XV rugby coach, and later as Headmaster, Monsignor Gavin’s commitment to the school was total. The same dedication was shown throughout his priestly work as Parish Priest and Chairman of the Diocesan Schools Commission – indeed, in whatever task he was given to do. As a priest, he was completely loyal, devoted to the service of God whomsoever needed his help.”

The Funeral Mass for Mgr Tom Gavin will take place at St Thomas More Church, on Tuesday, 12 January 2010, at 11.30am. The Principal celebrant will be Archbishop Bernard Longley.

Fr Jonathan Veasey, Parish Priest of St John Vianney, Coventry, and former Assistant priest at St Thomas More, Coventry, 1995-2004, said: “Mgr Tom Gavin was truly an outstanding priest. A man of prayer, devoted to his priestly duties and wanting the people in his care to be people of faith and good citizens. He had an amazing capacity to reach out to all sorts of people through the gifts of his humanity and faith. His dedicated service to the Church has been a source of inspiration for so many priests and lay people in the Archdiocese of Birmingham and beyond.”

Mgr Tom Gavin, pictured after the Mass of Thanksgiving at St Thomas More Parish Church, Coventry, to celebrate the Diamond Jubilee of his priestly ordination, on 22 June 2006, the Feast of Saints John Fisher and Thomas More.