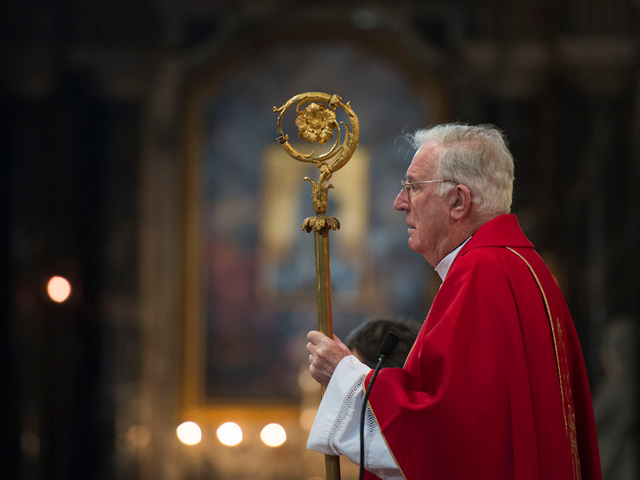 Cormac Murphy-O’Connor, who became the tenth Archbishop of Westminster (2000-09), was born in Reading on 24 August 1932, the fifth son of Dr George Murphy-O’Connor and his wife Ellen. His parents originally came from County Cork.

He was educated at the Presentation College, Reading, and Prior Park College in Bath. During the Holy Year of 1950 he began to train as a priest for the diocese of Portsmouth at the Venerable English College, Rome, where he joined his two brothers, Brian and Patrick. He later joked that the Rector, Mgr John Macmillan, needed some persuading since it was thought that two Murphy-O’Connors in a seminary was quite enough. While in Rome he gained licentiates in philosophy and theology from the Pontifical Gregorian University and was ordained by Archbishop Luigi Traglia on 28 October 1956.

Then in 1966 he became Private Secretary to the Bishop of Portsmouth, Derek Worlock. Murphy-O’Connor also served as Director of Vocations and helped establish the country’s first Diocesan Pastoral Centre at Park Place, Wickham.

In September 1970 he went to Immaculate Conception, Portswood as Parish Priest, but at the end of 1971 returned to Rome as Rector of the Venerable English College, his alma mater. The years following the Second Vatican Council were challenging ones to be a seminary rector, with much uncertainty about the future and the constant need, as he later put it, to ‘broker a peace between the people who want to change everything and the people who want to change nothing’. Murphy-O’Connor proved to be a steady pair of hands and did much to boost student numbers and the College’s finances. As Rector he also hosted Archbishop Coggan of Canterbury during his historic visit to Paul VI (1977).

In 1977 Murphy-O’Connor was appointed third Bishop of Arundel and Brighton, a diocese covering Sussex and Surrey. He was consecrated on 21 December by his predecessor, Michael Bowen, who had become Archbishop of Southwark. The new bishop quickly became engaged in a round of parish and school visitations, opening up his large house at Storrington for special events and adopting the American ‘RENEW’ programme. This was inspired by his belief that the Church should be ‘experienced not as a faceless institution but as a community, a family, to whose life all its members contribute’ and involved the creation of ‘small communities’ in parishes. He later admitted: “Renew had mixed results, but I think we went some way to recapturing the basic concept of Christian community.”

From 1982 until 2000 Murphy-O’Connor was Co-Chairman of the Anglican and Roman Catholic International Commission (ARCIC), and ecumenism remained a cause close to his heart. Indeed, in 2000 he was awarded a Doctorate in Divinity by the Archbishop of Canterbury in recognition of his work for Christian unity.

On 15 February 2000 Murphy-O’Connor was appointed tenth Archbishop of Westminster, in succession to Cardinal Basil Hume. The following year, on 21 February 2001, he was created a Cardinal Priest. Among the other new cardinals created that day was Jorge Mario Bergoglio, the future Pope Francis, with whom he would enjoy a friendly relationship. The new English cardinal was given the prestigious titular church of Santa Maria sopra Minerva, which not only contains the remains of St Catherine of Siena but also the tomb of Cardinal Philip Howard, great-grandson of the martyr St Philip Howard, whose shrine is at Arundel Cathedral.

As archbishop of a densely-populated and diverse diocese, Murphy-O’Connor took on various initiatives. In 2001 he began replacing Hume’s system of episcopal areas with four key areas of responsibility (Education, Clergy and Consecrated Life, Pastoral Affairs and Ecumenism and Interfaith relations), each one under the supervision of a different auxiliary bishop. He hoped this would serve to further unify the diocese.

In September 2003 he launched At Your Word, Lord with a special Mass held at Wembley Arena. The previous November he had invited the diocesan clergy to discuss the programme at Butlins holiday camp in Bognor Regis, a location chosen because of its accommodation space. Based on the ‘RENEW’ programme he had followed in Arundel and Brighton, the three year process brought together thousands in small prayer groups and promoted a vision of the Church as ‘a communion of communities.’ It was followed by the publication in February 2006 of a ‘White Paper,’ Communion and Mission, which identified the priorities for the local Church in the twenty-first century: the call to holiness, the formation of adults and young people, small communities, priesthood and vocations and increased participation, collaboration and accountability.

Aware of the scourge of child abuse and having had personal experience of cases as bishop of Arundel and Brighton, he commissioned Lord Nolan to chair an independent review on child protection in the Catholic Church in England and Wales. This was a landmark document and led to the establishment of an independent office (COPCA) to oversee the protection of children and vulnerable adults.

As a cardinal and President of the Bishops’ Conference of England and Wales, Murphy-O’Connor had to tackle many sensitive issues in the ‘public square’, providing a Catholic voice on issues as diverse as the war in Iraq, medical ethics and the 2006 Equality Act. He enjoyed good relations with the royal family and in 2002 not only read a prayer at the funeral of the Queen Mother but also preached before Her Majesty the Queen and Prince Philip at the Sunday service in Sandringham. He was privileged, too, to host the Queen and Prince Philip for lunch at Archbishop’s House, an historical highlight with regard to the place of the Catholic Church in British society.

On reaching the age of seventy-five, Murphy-O’Connor submitted his resignation to the Holy See. He continued until his successor, Archbishop Vincent Nichols, was appointed on 3 April 2009. Cardinal Murphy-O’Connor became the first Archbishop of Westminster to retire, all his predecessors having died in office.

He moved to a house on Duke’s Avenue, Chiswick and continued his work in Rome, taking up new posts on the Congregation for Bishops and the Congregation for the Evangelization of Peoples. On a number of occasions he acted as papal representative to such places as Stockholm, India, Bangladesh and Trondheim in Norway.

In June 2010 he was named as the Visitor to the Province of Armagh in the aftermath of the Ryan and Murphy Reports on child abuse.

After reaching his eightieth birthday in February 2012, many of his Roman commitments ceased and he participated in the conclave of 2013 as a non-voter.

Throughout his life, ‘Cardinal Cormac’ kept up a keen interest in sport (especially rugby and golf) and music; he was a talented pianist and occasionally performed at charity events and celebrations.

His publications include The Family of the Church (1984), At the Heart of the World (2004) and a volume of memoirs, An English Spring (2015). He will long be remembered for his personal warmth, humour and persuasive leadership.

We have a selection of the many images taken of Cardinal Cormac in a Flickr album.