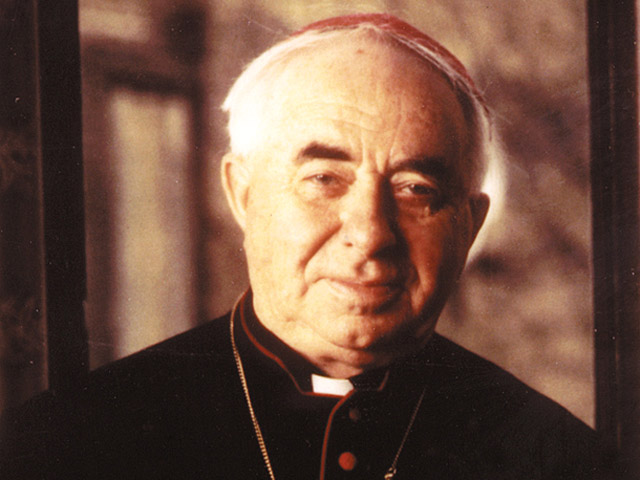 Auxiliary Bishop Emeritus John Jukes of Southwark will be particularly remembered as someone who sought to bring the insights of Catholic social teaching to business and industry. He was also a devoted pastor, moving to Scotland after his retirement to become a parish priest once again.

The eldest of three children, he was born in Eltham, south-east London, on August 7th, 1923, and was educated at St Joseph’s Academy, Blackheath. His father worked for a paint company owned by his family. His mother was a convert from the Church of England.

But while working as a student on Romney Marsh for a year, he decided to become a Franciscan. It was the preaching and hospitality of the friars he met in Rye, East Sussex, that seems to have inspired him.

He entered the Order of Friars Minor Conventual in 1946. After completing postulancy and novitiate in Liverpool, he was sent to Rome. He studied philosophy at the Gregorian University and obtained his licentiate in theology at the Pontifical Faculty of St Bonaventure.
Following ordination in 1952, at St. Anthony of Padua, Mossley Hill, Liverpool, he was appointed rector of St Bonaventure’s seminary and novitiate in Beaumaris, Anglesey.

In 1959 he was made parish priest of St Clare’s, Manchester, and the following year became secretary and vice-provincial of the province. He was sent to London in 1964 to take charge of St Patrick’s, Waterloo.

He moved to Canterbury in 1969, initially staying with the ordinands at St Augustine’s Anglican College. He was one of the founders of the Franciscan International Study Centre, which opened in the city in 1973, and was appointed its vice-principal. He also taught Canon Law, using his parish experiences to bring life to what can be a dry subject, and fundamental theology.

Along with other Franciscans, university staff and local Catholics he was involved in a forum for Catholic thought. He also helped lead parish missions in Kent. He once quipped that the first task was to convert the parish priest.

An important part of these missions involved visiting Catholics at home. When Bishop John knocked on the door of one house, the woman immediately led him down to the cellar – she thought he was calling to read the electricity meter.

In the 1970s, at St John’s Seminary, Wonersh, he ran courses for priests and laity in evidence taking at matrimonial tribunals. To speed up matrimonial cases, he went to Rome to negotiate the setting up of an appeal court for the province.

In 1973 he was made vicar episcopal for religious in Southwark diocese. Six years later he was elected minister provincial of the English province of the Friars Minor.

But within months Pope John Paul II appointed him Auxiliary Bishop of Southwark and Titular Bishop of Strathearn. He was ordained in St George’s Cathedral, Southwark by Archbishop Michael Bowen on 30th January 1980, and given pastoral responsibility for Kent.

His specific responsibilities included chairing the Kent Southwark Diocese Schools Commission and co-ordinating the work of the vicars for religious. He was also appointed episcopal chairman of the Southwark Metropolitan Appeals Tribunal.

He served for 20 years as chairman of the bishops’ committee for the world of work. He was passionate in his belief that Catholic social teaching had a valuable contribution to make to the understanding of work in society. This was the idea behind the booklet A Spirituality of Work, which the committee published in 2001 and he wrote the foreword to.

He was one of the main organisers of a conference, held in Liverpool in 1991, to mark the centenary of Rerum Novarum, Pope Leo XIII’s encyclical on the Industrial Revolution and the dignity of work.

Each year at the TUC Congress, Bishop John celebrated Mass for delegates. In his sermon at St Mary Magdalene’s Priory, Brighton, in 1999 he urged Catholics to put gospel values into practice by becoming active members of trade unions. And he urged the TUC to promote ethical values to counter some of the negative effects of globalisation.

Such efforts, he said, will result in setting up barriers to the many ills which are already to be seen as flowing from globalisation; unfair competition; loss of job security; degradation of human individuals or groups forced to work in inhuman conditions.

At a TUC rally in Hyde Park, he once shared a platform with National Union of Mineworkers’ president Arthur Scargill. He also attended the clergy section of the Amicus annual conference. At a local level, he represented Southwark diocese on the South London Industrial Mission.

From 1993 to 1999 he served as the chairman of governors of St Mary’s College, Strawberry Hill, and he later received an honorary doctorate from the University of Surrey.

When his mother became ill, she went to live with him at his house – The Hermitage, in West Malling, Kent. The house was piled high with books. Bishop John wore his trademark woolly hat both indoors and outdoors. Although a follower of St Francis, he had little time for the rabbits that invaded his garden.

When Bishop John retired in 1998, he had no intention of returning to parish life. He wrote in Briefing, ‘My original idea on retirement was to settle into a nice little house in the country. From there I planned a peaceful life with time for prayer, ready to help out with Sunday Mass if anyone was stuck.’
However, in 2002, when Bishop Mario Conti of Aberdeen asked him to become parish priest of Huntley, Banff and Portsoy, he accepted. He took on responsibility for around 300 Catholics, scattered across 200 square miles, who had been without a resident priest for six years.

That same year, fellow bishops and over 70 priests joined him at Aylesford Priory in Kent to celebrate his golden jubilee of the priesthood. Three years later, to celebrate his 25 years as a bishop, he went to Rome, with Bishop Howard Tripp, with who had been ordained Bishop. They were present at Pope John Paul II’s last audience.

Bishop John was one of the contributors to the 1993 book ‘God and the Market Place: Essays on the Morality of Wealth Creation’. He also wrote a number of articles for the Canon Law Society of Great Britain and Ireland.

Long distance walking and mountain climbing were two of his passions. He was particularly fond of Skye, where he would camp out in the church’s sacristy and cook lobster.

In 2005 he made the headlines in Scotland when he ordained to the diaconate a former priest of the Scottish Episcopal Church, who went on to become the country’s first married Catholic priest.

In recent years, as his physical health declined, he retired again, this time from parish ministry; although he kept very much up-to-date with the life of Catholic Church in Great Britain, particularly continuing to have a keen interest in the Church’s role in promoting social justice. In August 2010 he wrote an article looking back gratefully on 87 years of celibacy, which was published online by a national newspaper.