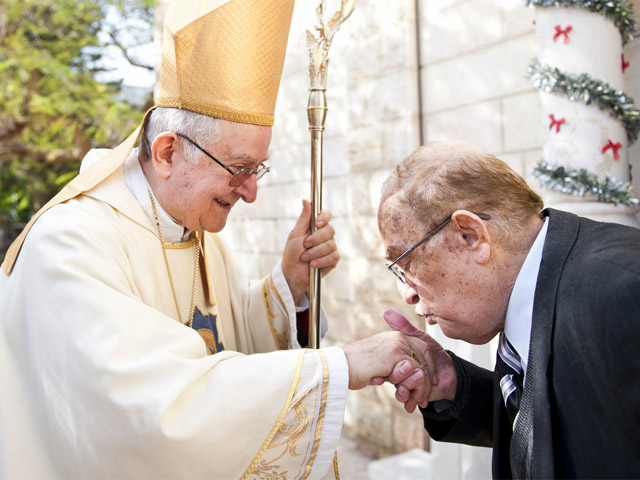 Bishops from across Europe and North America will meet in Jerusalem this weekend for the annual meeting of the Holy Land Coordination at a time of considerable political and social change in the region.

This year the Bishops of the Coordination will meet local Christians across the Holy Land, with parish visits to Gaza, Nablus and Jerusalem on Sunday 8 January, as well as meetings in Haifa, Ramallah and Jerusalem. With the Assembly of Catholic Ordinaries of the Holy Land, the opening session of the Coordination will take place on Monday 9 January. During the four days of the meeting, there will be addresses from His Beatitude Patriarch Fouad Twal and His Excellency the Apostolic Nuncio Antonio Franco, presentations from academics and a view from both Israelis and Palestinians about the impact of the “Arab Spring” and the socio-political changes in the region.

Archbishop Patrick Kelly said: “The “Arab Spring” is a reality which has many different aspects, some positive, some negative for Christian Communities and there is great uncertainty as to what will happen in the coming months. In such a small region what happens in Damascus cannot but have an effect on what is happening in Bethlehem and what happens in Egypt must touch Gaza, where some of the Bishops hope to celebrate Mass. Anything happening in any one of those countries inevitably touches them all.’

In addition to the prayers, liturgies and formal visits to other Catholic rites and Christian denominations, on Tuesday 10 January, there will be a visit to Haifa, during which there will be an inter-religious exchange with the Jews, Muslims, Druze and Bahai. Political meetings will take place with both Israeli and Palestinian ministers.