National Invitation to Venerate the Heart of St John Vianney 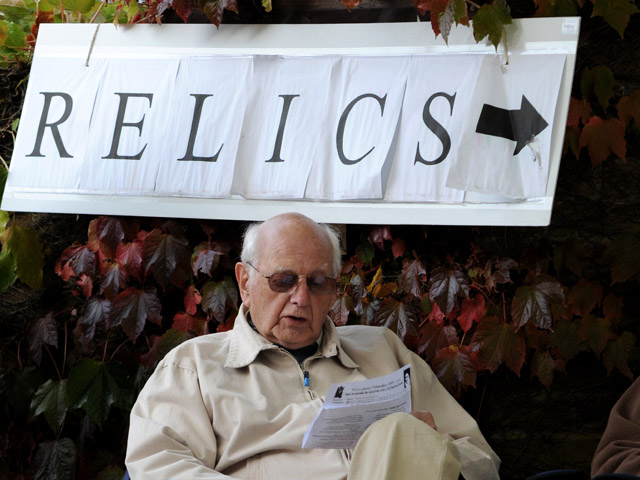 A national invitation for Catholics throughout the country to converge on Liverpool to venerate the relic of the heart of St John Vianney has been issued by the Rt Rev. Mark Davies, the Bishop of Shrewsbury, in a six-minute film posted on YouTube.

The film has been released exactly a month before the arrival of the heart of the patron saint of parish priests into Manchester Airport on 5 July.

In the first ever British tour of the relic the four-day visit will see the heart taken to a range of venues including Wythenshawe, Manchester, on 5 July, Liverpool and the Wirral on 6 July, Cheshire and Shropshire on 7 July and Birmingham on 8 July.

In the clip, Bishop Davies invites Catholics everywhere to the National Day of Prayer for the renewal of parish life and for vocations in the presence the relic at the Metropolitan Cathedral of Christ the King, Liverpool, a building which can accommodate 3,000 people.

“On Friday 6th July there is a national invitation for everyone to come on that day to the Metropolitan Cathedral of Christ the King in Liverpool,” says Bishop Davies in the video.

“To quantify the success of this visit we wouldn’t be so much looking to quantify it in numbers or responses in that way,” he said. “I would regard this visit as a success if only a handful of people are invited to deeper prayer, to a more serious consideration of their vocation and are inspired by the example of one of the greatest saints in our history, who drew so many people to Christ through his own example and ministry.”

The relic will be shown in Liverpool between 10am and 4pm. There will be a Mass concelebrated by the bishops of Liverpool and Shrewsbury as well as Divine Office, Confessions, Exposition of the Blessed Sacrament and Veneration.

The relic of the heart will be flown from Ars, France, at the invitation of Bishop Davies principally in the prayerful hope that it will present a “moment of grace” for the Diocese of Shrewsbury, which covers nearly all of Cheshire, all of Shropshire, Wirral, and parts of Greater Manchester and Derbyshire.

The relic will also be taken to the Invocations Annual National Vocations Conference in Birmingham.

The vocations event, which this year will focus in a particular way on the priesthood and its role in the life of the Church, will be held at St Mary’s College, Oscott, Birmingham, from 6-8 July.

The relic will be present at the festival from Saturday evening when Bishop Davies addresses participants. The Most Rev. Vincent Nichols, the Archbishop of Westminster and president of the Bishops’ Conference of England and Wales, and the Most Rev. Bernard Longley, the Archbishop of Birmingham, are expected to preach at the event on the following Sunday.

The relic will be accompanied throughout the visit by the Rt Rev. Guy Bagnard, the Bishop of Belley-Ars, France, along with two priests of the Ars Diocese.

St John Mary Baptist Vianney was canonised in 1925 by Pope Pius XI who four years later also made him the principal patron saint of parish priests.

This was in recognition of the outstanding holiness of the French parish priest who, until his death on 4 August 1859, had served for 40 years in the small town of Ars-en-Dombes and who even in his own lifetime was regarded by many as a saint.

St John was born in Dardilly, near Lyons, on 8 May 1786 and grew up on his father’s farm. From childhood he was conscious of a vocation to the priesthood but it was not until he was 20 that he was allowed to leave his work at the family home to study at a presbytery school in the nearby village of Ecully.

In 1809 he was conscripted into Napoleon’s army but deserted the following year as he was about to be deployed to Spain. An amnesty for defaulters declared by the Emperor in 1810 enabled him to return home a free man.St John returned to his studies but he struggled with Latin and some academic subjects. His tutors saw, however, that his keen grasp of moral theology was deeply informed by his own exemplary life of virtue and austerity, with one describing him as “the most unlearned but the most devout of seminarians in Lyon”. He was accepted for the priesthood and was ordained in August 1815, some two months after the Battle of Waterloo.

In 1817 he took up his post in Ars, then a village of just 230 people. There, he exhorted the villagers to abandon their lives of petty vice and religious indifference and to seek holiness instead. He also opened parochial missions, a school and a shelter for orphans and abandoned children.

St John’s reputation for holiness spread and pilgrims began to travel to Ars from all over France so he could hear their confessions. Between 1830 and 1845 there was an average of 300 visitors a day, with the saint spending 11 or 12 hours in the confessional during the winter months and up to 16 hours a day in summer. In the final year of his life 100,000 pilgrims visited him.

St John was invested with immeasurable spiritual gifts, including healing, prophesy, and an ability to “read souls” whereby he exhibited a supernatural understanding of people’s lives and circumstances without having previously met them.

When he received the final sacraments of the Church, at the age of 73, he was joined by no less than 20 priests. A total of 300 priests and 6,000 faithful attended his funeral. His feast day is celebrated on 8 August.

In honour of the 150th anniversary of St John’s death Pope Benedict XVI opened a Year for Priests that ran from the feast of the Sacred Heart on 16 June 2009 to the following summer.

The saint’s heart was taken to the Vatican for the opening ceremony and carried in procession through St Peter’s Basilica.

During the event, Pope Benedict paused to pray before heart, encased in a glass and gold reliquary. The Holy Father said that the heart was “burning with divine love” which priests ought to imitate if they were to be effective ministers.