One of the highlights of 2021, in March, was Pope Francis’ historic visit to Iraq – the first of any pope to the country.

In his first overseas visit of Covid pandemic times, the Holy Father made a huge impact with his addresses and homilies not to mention his very presence among the people.

There were memorable encounters at every turn – Mass in the Chaldean Cathedral of Saint Joseph in Baghdad, a moving visit to Qaraqosh, so ravaged by Daesh in 2014, an interreligious gathering in Ur, a visit to Mosul, Mass in Erbil and a private meeting with Grand Ayatollah Sayyid Ali Al-Husayni Al-Sistani in Najaf.

The latter encounter was particularly significant as it was during this meeting that the Grand Ayatollah affirmed his interest in Christian citizens living like all Iraqis in peace and security while preserving all their constitutional rights.

So what exactly is the legacy of the papal visit and how is the Church working to build a peaceful future for all?

One man well placed to answer these questions is Cardinal Louis Sako – the man who welcomed Pope Francis to Iraq.

Cardinal Sako, Archbishop of Baghdad and Patriarch of Babylon of the Chaldeans, says the Pope’s presence broke the ‘barrier of fear’ for Iraq’s Christians. He also believes that the Pope touched the hearts of all Iraqis, especially Muslims, and that something has changed in the streets.

However, we can’t ignore the backdrop of contentious October elections with a poor voter turnout.

Political stability still seems a long way off and the spectre of violence is rarely far away. But Patriarch Sako is a man of hope – a Christian leader who prays, as we all do, for a peaceful, unified country for all Iraqis.

Watch our interview on this page or on YouTube.

Our content for the visit to Iraq, with links to news pieces can be found in our ‘Pope Francis’ section.

Cardinal Louis Sako also spoke to us in the weeks leading up to the visit. You can listen here. 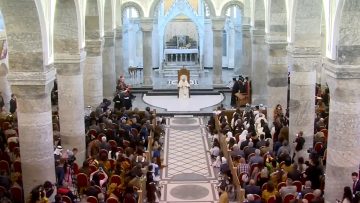