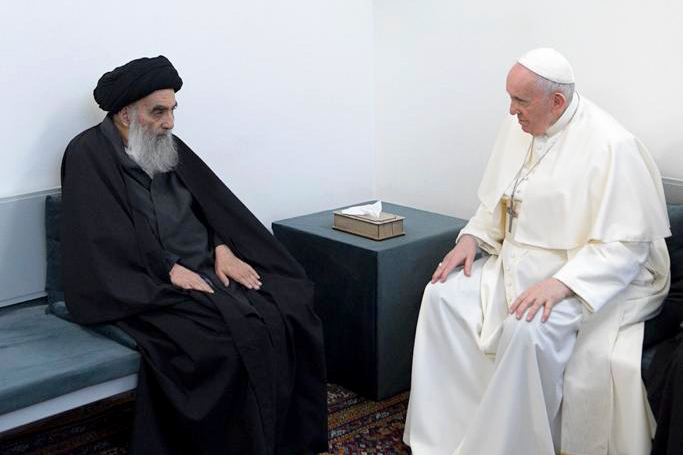 Shortly after the historic meeting between Pope Francis and Grand Ayatollah Al-Sayyid Ali Al-Husseini Al-Sistani, the Office of the Supreme Religious Authority of World’s Shia Muslims, Grand Ayatollah Sistani, released a statement on the meeting.

Significantly, Grand Ayatollah Al-Sistani “affirmed his interest in Christian citizens living like all Iraqis in peace and security while preserving all their constitutional rights.”

In the name of God, The Most Compassionate, The Most Merciful

This morning [6 March 2021], His Eminence Sayyid Al-Sistani met with the Supreme Pontiff, Pope Francis, Pope of the Catholic Church and Head of State of the Vatican.

During the meeting, the discussion revolved around the great challenges that humanity faces in this era and the role of faith in God Almighty and His messages, and commitment to high moral values ​​in overcoming them.

His Eminence talked about the injustice, oppression, poverty, religious and intellectual persecution, suppression of basic freedoms and the absence of social justice, especially the wars, acts of violence, economic blockade, displacement and so on, especially the Palestinian people in the occupied territories.

His Eminence indicated the role that the great religious and spiritual leaders should play in curbing these tragedies, and what is hoped for by urging the concerned parties – especially those with great powers – to prioritise reason and wisdom and to reject the language of war, and not to promote their self-interest over the rights of the people to live in freedom and dignity, and stressing the importance of concerted efforts to consolidate the values ​​of harmony, peaceful coexistence and human solidarity in all societies, based on fostering rights and mutual respect among followers of different religions and intellectual trends.

His Eminence praised the status and glorious history of Iraq as well as its people from various faiths. He also expressed his hope that Iraq would surpass its current ordeal soon. He affirmed his interest in Christian citizens living like all Iraqis in peace and security while preserving all their constitutional rights.

Grand Ayatollah Sistani also pointed out part of the role that the religious authority played in protecting Iraqis and all those who had suffered injustice and harm in the incidents of past years, especially during the period during which the terrorists seized vast areas in several Iraqi provinces where they carried out criminal acts there.

His Eminence wished the Supreme Pontiff, the followers of the Catholic Church, and the general public of humanity good and happiness, and thanked him for making the effort to travel to Najaf to make this visit.

The Office of Al-Sayyid Al-Sistani

The Holy City of Najaf