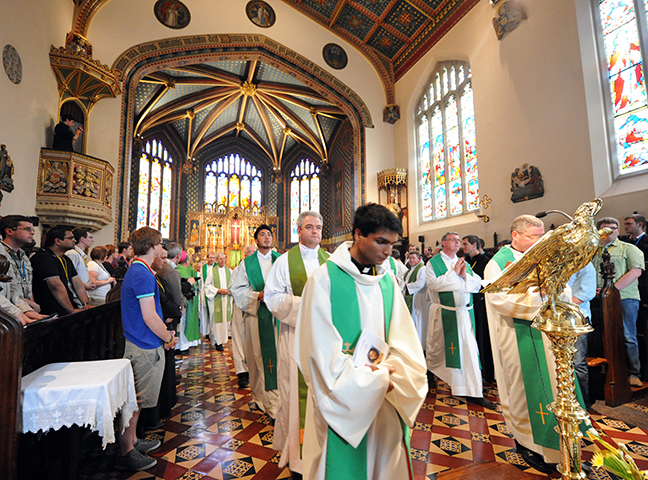 Young people will gather to think about their calling in life and what role they have in the Church at a festival this weekend.

Invocation 2014, is being held at Oscott Seminary, in Birmingham, from Friday 4 July – Sunday 6 July.

The event will see more than 400 young people descend on the seminary to camp out for a weekend of events including a range of speakers, a candle lit procession, Mass and workshops.

There will be a key-note speech by Archbishop Rino Fisichella, president of the pontifical council for promoting the New Evangelisation, who has flown from the Vatican for the event.

Archbishop Fisichella has already given his backing to Invocation and the work it does and will speak on what young people’s mission is at the heart of the New Evangelisation.

Executive director for Invocation Chris Smith said: “Young Catholics living in today’s society need to be accompanied and directed by informed, inspiring and experienced guides; priests and religious, educators from our Catholic schools, youth leaders, witnesses from within parish communities and from within their own families.

“Young people seek an abundance of opportunities; to encounter the Lord, for discernment, formation, catechesis and fellowship, all within the right environments, and they want to develop and be equipped with the right tools so as to listen, discern and respond to the call of Christ in their lives.

“Invocation seeks to form experienced and inspiring leaders in discernment. It endeavors to provide the right tools, and it seeks to provide the best opportunities within the right environments for young people to listen, discern, and respond to the call of Christ in their lives. It does this by supporting and enhancing the work of other agencies and groups in providing outstanding practice across these key areas where it already exists. Furthermore, Invocation strives to seek out and develop new ideas and ways forward to meet the vision of what would help young people.”

Curtis Martin, from FOCUS USA, the fellowship of Catholic University Students. In 2010 Pope Benedict XVI appointed Curtis as a consulter to the Pontifical Council for the promotion of New evangelisation. He holds a Masters degree in Theology, wrote Made for More, and co-hosts a show on EWTN. He was awarded, along with his wife, the Benemerenti medal, for outstanding service to the Church.

Sr Roseann Reddy, worked for the Society for the Protection of Unborn Children before moving to Glasgow Archdiocese where she assisted Cardinal Winning. In 1997 he founded the Cardinal Winning Pro-Life initiative, which she ran. In 2000 she and colleague Sr Andrea became the first members of a new religious community in Scotland. The first community in Scotland for more than 150 years, called the Sisters of the Gospel of Life

Dr Andrew O’Connell is communications director for the Presentation Brothers based in Dublin. A key part of his work is working with young people in helping them overcome challenges they face in society. He has a PhD in Chemistry and previously worked for Intel Corporation in the USA.

There will also be a candle lit procession on Saturday night in the grounds, Mass with Cardinal Vincent Nichols on Sunday, Holy Hour, Vespers and Morning and Night prayer.

There are a range of workshops running throughout the event too, including advice on how to decide what religious order is for you, prayer and catechesis.
For more information visit invocation.org.uk. Twitter: #Invocation2014 for updates from the festival and follow @Invocation_CT. Follow us on Facebook, Invocation.