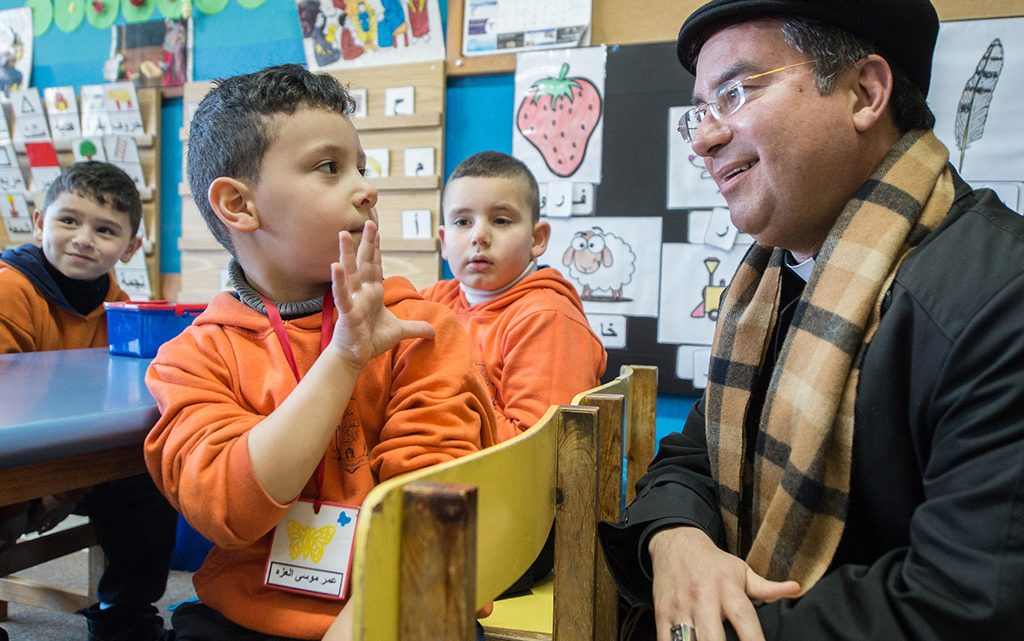 Political leaders are failing the youth of the Holy Land through their inability to promote dialogue in the search for a solution to the conflict and by presiding over an economy that is not offering job opportunities and has led to a housing shortage. And yet, they continue to hope and dream of a better future: this was the message young people gave to the visiting bishops of the Holy Land Coordination during their annual visit.

Bishops from across Europe, North America and South Africa came to listen to young Palestinians and Israelis as they expressed their hopes and fears for the future. The visiting Bishops make up the Holy Land Co-ordination, mandated by the Holy See, focusing on prayer, pilgrimage and advocacy for justice and peace with the aim of acting in solidarity with the Christian community there and sharing in the pastoral life of the local Church as it experiences intense political and socio-economic pressure. This year the bishops met from 13 – 18 January with a specific focus on meeting young people.

This failure by political leadership, both locally and internationally, has been exacerbated recently by ever more divisive language and actions. The bishops pointed to the threat to any prospect of peace by morally and legally unacceptable decisions – in particular the recent affront to the internationally recognised status of Jerusalem.

In their final communique, the bishops speak of the devastating effects of over 50 years of occupation and conflict on young lives also blighted by unemployment, lack of housing and opportunity. In Gaza, which continues to be a shocking scandal and an injustice that cries out for a resolution, the blockade continues to rob young people of the opportunity to flourish as they remain trapped by the wall. Across the West Bank young people suffer violations of their dignity on a daily basis, which have become unacceptably normalised by occupation.

Meanwhile, many of the young Israelis met by the bishops also recognised the distorting effect on their lives of a conflict they did not create and do not want.

And yet both young Palestinians and Israelis are the ones who have to deal with the consequences of the failure of older generations. The bishops heard young people from all sides who share the same aspirations for peaceful coexistence, yet are facing completely different realities.

One of the major issues is the lack of opportunities for the youth divided by a wall to ever meet or understand each other’s hopes and fears.

After visiting Gaza, where the Christian population has fallen to 1,000, of whom 150 are Catholics, the bishops met with school children in the West Bank and in Israel, along with students at the Hebrew University in Jerusalem and those attending courses run by Bethlehem University. They also visited l’Arche in Bethlehem and the home for the elderly in Beit Emmaus, where young volunteers assist in the care for the disabled and elderly.

Despite the many and manifest problems and injustices, the bishops saw glimpses of light within the darkness. Inspired by the resilience and action of many young people alongside those active in promoting a better future through dialogue and caring for others, the bishops concluded their final communique with a call for the communities in their own countries to act in solidarity with those in the Holy Land through supporting organisations which help to create jobs, provide housing, and facilitate dialogue; through prayer and making pilgrimages which encounter and support local people; and through standing resolutely against all those who seek to create further division.

Hope for a better future

We have come to the Holy Land to meet its youth, listen to their voices, and pray for justice and peace. Despite the continuing destructive conflict and the divisive approach of so many in power, our faith in God gives hope for the better future sought by young people here. Over the past week we have witnessed and heard of their struggle to build this dream.

Young people in Gaza continue to be robbed of their life chances by the enduring blockade, which indiscriminately denies them the opportunity to flourish. Young people in the West Bank continue to suffer violations of their dignity on a daily basis, which have become unacceptably normalised by occupation.

Young lives throughout the Palestinian Territories are blighted by unemployment. Pope Francis has consistently decried unemployment as one of the greatest barriers preventing today’s youth from reaching their full potential.

Many of the young Israelis we met in schools and universities recognise they are living in the shadow of a conflict that they did not create and do not want. We listened to young people from all sides who share the same aspirations for peaceful coexistence, yet are facing completely different realities, with few opportunities to ever meet or understand each other’s hopes and fears.

For a whole generation the prospect of peace has been made even more remote by morally and legally unacceptable decisions – in particular the recent affront to the internationally recognised status of Jerusalem, a city sacred to Jews, Christians and Muslims.

The young people of the Holy Land have been consistently failed by both their own leaders and the international community. The anger that we witnessed is entirely justified – it is also a sign that they retain the conviction to strive for change.

Throughout the West Bank, Gaza and Israel the youth are keeping hope alive through their resilience and courage. The local Christian community, though small in number, is an integral part of this, not only through the contribution of its own youth, but also through its service to all young people.

It is young people who are daring to pursue justice and challenge the divisions that have been forced upon them. It is schools and youth projects that are breaking down barriers and equipping people to build tolerance. It is young volunteers, such as those working with L’Arche in Bethlehem, Beit Emmaus in Qubeibeh, and religious orders in Gaza, who are demonstrating humanity in this wounded society.

We share the hope of those young people we met in the Holy Land and recognise their essential role in promoting peace. They have helped us to see hard realities through their eyes. And so we call on our communities at home to act in solidarity with them:

– through supporting organisations which help to create jobs, provide housing, and facilitate dialogue;

– through prayer and making pilgrimages which encounter and support local people;

– and through standing resolutely against all those who seek to create further division, especially among our own political leadership.

Above all we hold the young people here in our prayers and inspired by Pope Francis commit ourselves, with the help of God’s grace, to play our part in making this land more human and more worthy for the youth of today and the future.

catholicnews.org.uk/hlc18
Our section on the Holy Land Co-ordination 2018

flickr.com/catholicism
Experience the Holy Land Co-ordination through the excellent images on our Flickr stream.