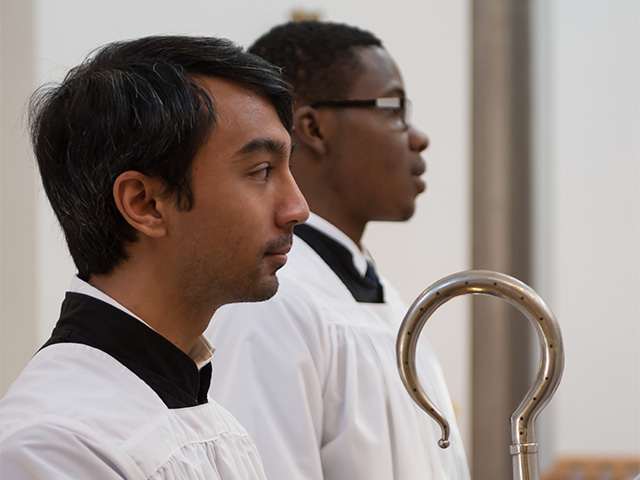 CBCEW » News and Media » » Catholic Church in England and Wale...

The Catholic Church in Britain is to target men from ethnic minorities to boost numbers at seminary.

The move follows a fact-finding visit to the US where vocations promoters have started having “Hispanic breakfasts” with community leaders. Spanish speakers outnumber English speakers in many US dioceses yet the number of Hispanic seminarians remains very low.

Fr Stephen Langridge, Chairman of the Conference of Diocesan Directors of Vocation of England and Wales, who was a member of the group that visited the US in September of this year, said: “The Catholic Church in our country has been greatly enriched by immigrants in recent years. Many families from Asia, eastern Europe and Africa are very strong in the faith. We want to help the young men in these families to recognise that God may be calling them to serve as priests in their new homeland. Sometimes, if they don’t see priests from their ethnic group in their parishes, they can lose heart. We need their ministry!”

The vocations directors, at their annual meeting at the Kairos Centre in London last week, also considered a raft of other measures including relaunching the popular “ukpriest.org” website, special assemblies for 10- and 11-year-olds and resourcing parish priests, who are seen as the main promoters of the “culture of vocation”.

During the three-day conference, psychotherapist Fr Anthony Doe told the priests that their first duty was to be mindful of their own interior lives. “You must go further into the Heart of Jesus so that you can inspire those whom you are accompanying to experience conversion too,” he said.