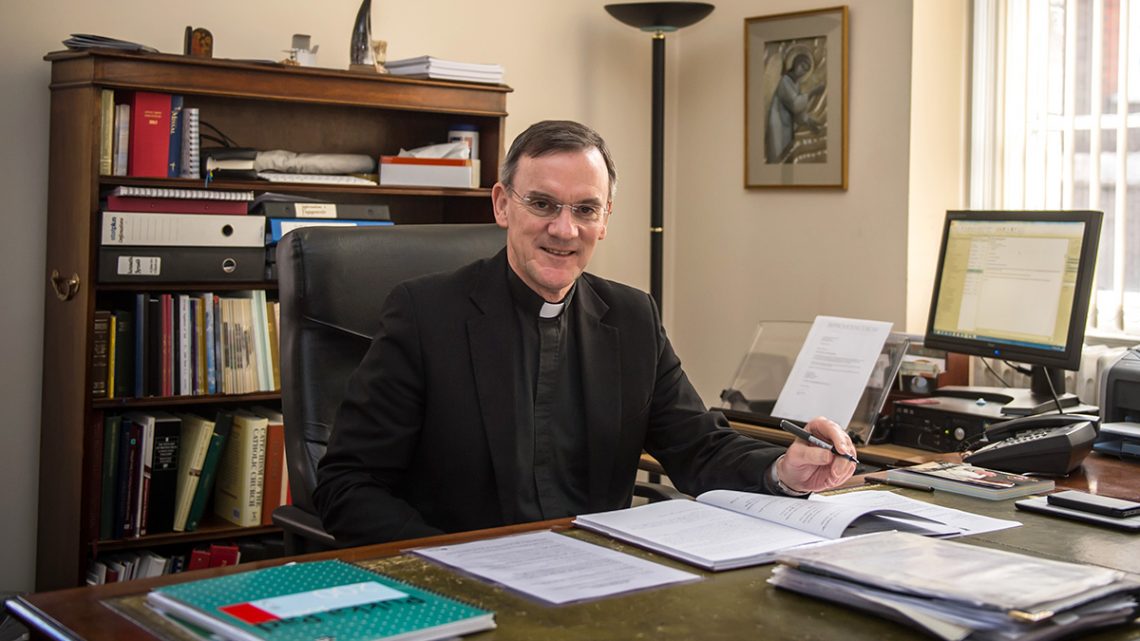 Mgr Arnold, 52, who was ordained a priest in 1983, has also been appointed Moderator of the Curia for the Diocese of Westminster by Cardinal Cormac Murphy-O’Connor.

According to Canon Law, under the Bishop’s authority, the Moderator is to coordinate activities concerning administrative matters and to ensure that the others who belong to the Curia properly fulfil the offices entrusted to them.

The Episcopal ordination of the new Bishop-elect will take place at Westminster Cathedral on Thursday 2 February 2006, the Feast of the Presentation of the Lord.

Commenting on the appointment, the Archbishop of Westminster, Cardinal Cormac Murphy-O’Connor said: “I am delighted to have Mgr. John Arnold as one of my Auxiliary Bishops. His primary task will be to assist me in the pastoral care of the priests and people of the Diocese. I am confident that he will carry out his new responsibilities with his customary dedication and enthusiasm.”

“Being appointed an Auxiliary Bishop of Westminster is both a great honour and a tremendous responsibility. I look forward to assisting the Cardinal in his ministry in serving the spiritual and pastoral needs of the Diocese. Above all, I will seek to do my utmost to ensure that the tremendous diversity, enthusiasm and knowledge of the priests and people of the Diocese of Westminster are harnessed to the service of the Gospel.”

“As Moderator of the Curia, I hope to help make it possible for everyone in the Diocese to make full use of their gifts in building up the community of the Catholic Church. It is also important that the Church is able to answer the growing thirst for faith and the spiritual which exists in the broader community of Westminster.”

“I would like to express my particular thanks to the Institute of Charity (Rosminians) for their teaching and inspiration. Whilst at school at Ratcliffe College, they challenged me to think about faith and its practical impact on life. Later on, it was again the Rosminians who encouraged me in responding to an idea of priesthood and priestly ministry.“

Following Mgr. John Arnold’s appointment as Bishop and Moderator of the Curia, Fr. Seamus O’Boyle has been appointed as the new Vicar General for the Diocese of Westminster. He will work with Bishop Alan Hopes in exercising his responsibility for the care and appointment of priests in the Diocese.

John Arnold was born in Sheffield in 1953, the third child and only son of Kenneth and Mary Arnold. In 1976, after graduating in Law from Trinity College, Oxford, and being called to the Bar in Middle Temple, he entered the novitiate of the Institute of Charity (Rosminians), taking simple vows in 1978 before beginning studies at the Gregorian University in Rome.

In 1981 he left the Rosminians and became a student for the priesthood for the Diocese of Westminster residing at the Venerable English College. After Ordination in 1983 he continued his studies in Rome gaining a Doctorate in Canon Law. In 1985 he was appointed a Chaplain at Westminster Cathedral, becoming Sub-Administrator in 1989.  In 1993 he became parish priest of Our Lady of Mount Carmel and St George in Enfield and remained there until 2001, serving also as Promoter of Justice for Cardinal Hume.

In 2001 Cardinal Cormac Murphy-O’Connor appointed him as Chancellor and Vicar General. During this he oversaw the ‘Graced by the Spirit’ consultation which led to the publication of the Green Paper on the future of the Diocese (Full details of the consultation and the Green Paper can be found at the Diocesan website, www.rcdow.org.uk).

An Auxiliary, or assistant Bishop, assists the Bishop of the Diocese. There are a total of four Auxiliary Bishops of Westminster.

Bishop-elect John Arnold will have responsibility for the pastoral care of the Deaneries of Barnet, Brent, Enfield, Haringey, and Harrow.

Bishop George Stack will assume pastoral responsibility for the Deaneries in Hertfordshire in succession to Bishop Jim O’Brien.

Bishop Alan Hopes will continue to have pastoral care of the Deaneries of Ealing, Hammersmith and Fulham, Hillingdon, Hounslow, Kensington and Chelsea, North Kensington, and Upper Thames.

The Diocese of Westminster is one of the smallest dioceses in England and Wales in geographical area, but the largest in terms of Catholic population and priests. The diocesan boundaries include the London Boroughs north of the River Thames, between the River Lea to the East, the Borough of Hillingdon to the West, and including the County of Hertfordshire to the North.

The Diocese comprises 216 parishes, of which 37 are administered by religious congregations. At the beginning of 2005, there were 241 priests of the Diocese working in the Diocese itself, together with 31 priests from other dioceses and 319 priests of religious congregations. The Diocesan Trustee also has responsibility for 163 primary schools, 39 secondary schools and 2 Sixth Form colleges.