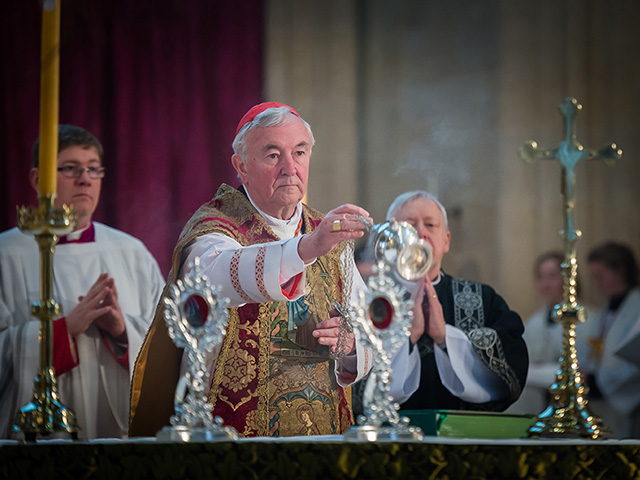 Cardinal Vincent Nichols has celebrated a Requiem Mass for the repose of the soul of King Richard III at Holy Cross Priory in Leicester.

The Cardinal wore a beautifully embroidered 550-year-old chasuble called the ‘Westminster vestment’ – an item that could well have been worn by priests to celebrate Masses attended by the Catholic monarch.

The Mass, said Cardinal Vincent in his homily, fulfilled “a profound and essential Christian duty”, that of praying for the dead, for the repose of their eternal souls.

“It is an important Catholic tradition to seek the celebration of Mass for the repose of the souls of those who have died, especially for each of our loved ones whose passing we mourn. Let us not forget or neglect this great gift.

“During this week, Mass is being offered in many Catholic Churches for the repose of the soul of King Richard III. Rightly so. That is exactly what he would have wished, having himself set up at least one chantry chapel for Masses to be celebrated for the dead of both sides of the Battle of Towton in 1461. This was a most violent conflict, marking the defeat of Henry IV, a single day on which between 10-20,000 Lancastrians were killed and a stark demonstration of the tragedy of civil war. Prayers were indeed needed.”

Acknowledging the contribution Richard III made to our legal system and its administration, the Cardinal also pointed to the king’s shortcomings.

“His role and arbiter and judge appear strongly in contemporary records and he twice asserted, in one legal dispute, that ‘we intend, nor will none otherwise do at any time, but according to the King’s laws.’ His actions did not always match those words. But this evening we pray that the merciful judgement of our loving God is extended to him in every degree, for we know that it is only the gift of God’s mercy that protects us from the demands of God’s justice.

“I am much relieved that this evening we are not required to come to any such judgement ourselves. Indeed the judgement of our fellow human being is only of passing consequence for we know how fickle that judgement can be. This we see most clearly as reflection continues on the dramatic years of the House of Tudor in both fiction and historical research: saints are recast as sinners and sinners can become saints. But that is not our business.

“Ours is to beseech of our loving Father the embrace of his mercy for this our brother who lived and died so long ago but who through such strange circumstances is again at the centre of public attention and human judgment.”

You can read Cardinal Vincent’s homily by using the link below or to the right of this page.