Cardinal Nichols returns to his home City for Mass of Thanksgiving 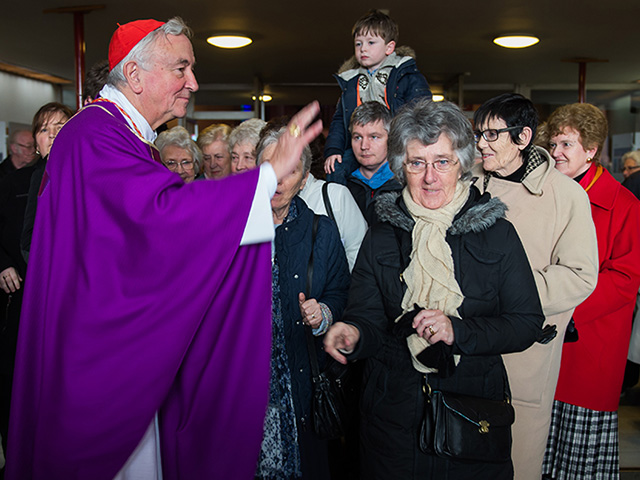 Over two thousand people filled Liverpool’s Metropolitan Cathedral of Christ the King on Sunday afternoon to welcome home Cardinal Vincent Nichols. The Cardinal, who was ordained priest for the Archdiocese of Liverpool in 1969, celebrated a Mass of Thanksgiving following the Consistory which saw Pope Francis create him a Cardinal on Saturday 22 February.

The Lord Lieutenant of Liverpool, Dame Lorna Muirhead, and the Lord Mayor of the City, Councillor Gary Millar, did the readings at the Mass as they joined civic dignitaries from throughout the region in the congregation. Parishioners too came from throughout the Archdiocese, many having known or worked with Father Nichols when he served in Wigan, Toxteth and Upholland.

Students from St John Rigby Sixth Form College in Orrell, where the Cardinal once served as Chaplain, led the Prayer of the Faithful and the Choir of the Metropolitan Cathedral led the music of the Mass which included the motet ‘Greater Love’ by John Ireland which contains the word of Cardinal Nichols’ Episcopal motto, ‘Fortis est ut Mors Dilectio’ (‘Love is strong as death.’)

In introducing the Mass the Cardinal spoke of his ‘great delight’ in the celebration and thanked the congregation for coming to the Cathedral saying, ‘I welcome you all most warmly and I thank you for your presence.’

Beginning his homily he reflected on the journey through Lent and the Gospel account of the Transfiguration of Jesus. Drawing a parallel with the Cathedral celebration he said, ‘Peter said to Jesus, “It is wonderful for us to be here”, and I think that is true of us this afternoon. It is a wonderful moment and I would like to thank you again for coming from so many different places.’ He went on to welcome his own brother, John, who had been unable to travel to Rome or London from his home in Liverpool, saying that it was ‘an important moment for him and I as a family’.

The Cardinal spoke of his days in Rome for the Consistory as being both ‘humbling and marvellous’: ‘They were wonderful moments, delightful moments, never before, and only slowly, do you learn about being a Cardinal.’ He said that to take part in the Consistory and concelebrate the Mass with Pope Francis renewed and strengthened his faith, ‘To stand in that College of Cardinals with Pope Francis, around the Tomb of St Peter, was a real experience of the depth of our faith; the depth in history and the breadth of it around the world, so we reaffirmed and strengthened our faith’.

The Cardinal reflected on Sunday’s Mass as ‘a moment for memories, a moment for events we’ve shared, a moment to remember some struggles and achievements and my mind goes quickly through different places in which I have served in this Diocese. With great joy I think of Skelmersdale. I think of Wigan of St John Rigby Sixth Form College. I think of St Anne’s down the road in Toxteth. I think of the years I spent here in this Cathedral. I think of Manchester and my time at the University there and I know that people have come from many different places to be here this afternoon and again I thank you.’

Before the final blessing of the Mass Bishop Tom Williams, Apostolic Administrator for the Archdiocese of Liverpool, thanked Cardinal Nichols for coming to the Metropolitan Cathedral for the Mass and offered the prayers and support of the people of the Archdiocese. He presented the Cardinal with a cheque for £20,000 from a collection held in the parishes of the Archdiocese and which will go towards the work of the Friends of the Holy Land.

After the Mass Cardinal Nichols greeted people at the entrance to the Cathedral, where for forty-five minutes he happily met with the congregation posing for photos with many of them.

You can listen to three audio clips from the Thanksgiving Mass in Liverpool:

Use the players/links to the right of this article to download or listen.

You can listen to a short clip on Audioboo in which Bishop Tom Williams, Apostolic Administrator for the Archdiocese of Liverpool, makes a subtle-ish mention of Liverpool FC’s Old Trafford win drawing applause from the red half of the congregation!