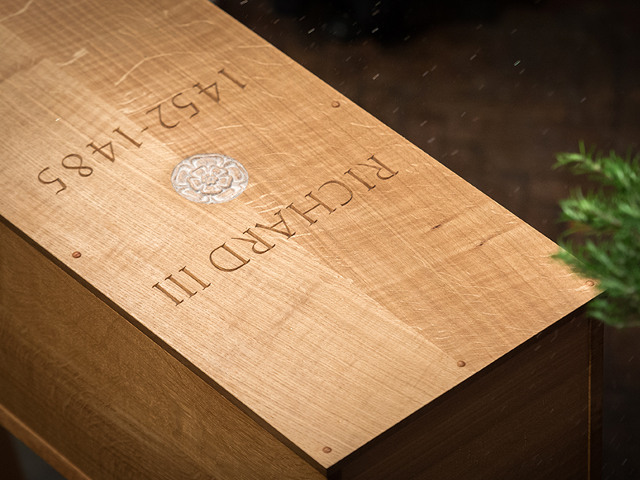 Cardinal Vincent Nichols this evening incensed the coffin of King Richard III and offered prayers for the monarch who died in 1485 at Bosworth Field and whose remains were found buried beneath a council car park in Leicester in 2012.

The Cardinal gave a homily at a service of Compline in Leicester Cathedral – what is now the final resting place of Richard III:

“The deepest intentions of Richard have always been hard to fathom. Yet that is often true for many of us. Within the depth of his heart, amidst all his fears and ambitions, there surely lay a strong desire to provide his people with stability and improvement. In his two short years as King, he reshaped vital aspects of the legal system, developing the presumption of innocence, the concept of blind justice and the practice of granting bail rather than being held in jail. He established the Court of Requests to give wider access to justice and insisted on the translation into English of all written laws and statutes so that they were readily accessible to all. Nevertheless his reign was marked by unrest and the fatal seepage of loyalty and support.

“All of this reminds us, if we need reminding, that baptism does not guarantee holiness of life or saintliness of nature. But it gives a fundamental and enduring shape to a journey through life, in all its struggles and failures. This ‘King of England and France and Lord of Ireland’, to give him his self-styled title, was a man of prayer, a man of an anxious devotion. In a surviving prayer, we hear him pleading with God for the protection of the Archangel Michael and for deliverance from his enemies.”

Referring to the service and the incensing of the coffin, the Cardinal said:

“Incense signals to us the presence of God. It is a sign of his majesty. We pray that, being brought into the presence of that Divine majesty, Richard may be embraced by God’s merciful love, there to await the final resurrection of all things in the fullness of time.”

When concluding his homily, Cardinal Nichols commended the soul of the king to God:

“May the dignity of this Compline, the beauty of its prayer, the richness of its gestures of reconciliation, enliven in us all that desire to serve rather than be served, to heal rather than to gloat in victories great or small, to honour and respect the other rather than seek advantage. In these ways, may our kingdom reflect the eternal Kingdom of God, to which we commend the soul of this King even as, at last, we permit his remains to rest in peace.”

You can read or download Cardinal Nichols’ full homily by using the link below or to the right of this article.