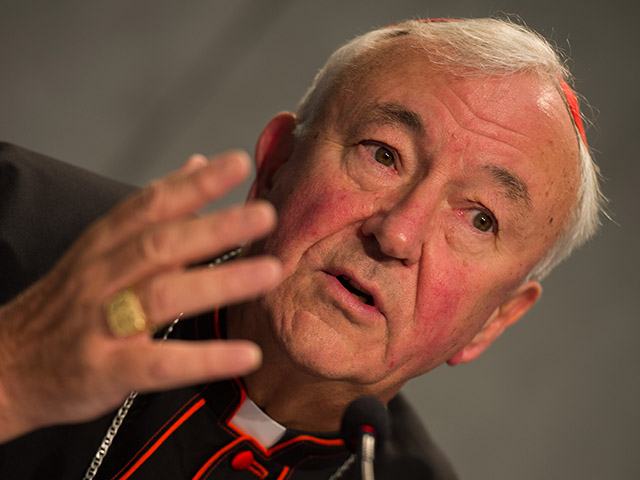 Cardinal Vincent Nichols called on Europe to be open to the rest of the world and praised the Synod of Bishops for playing an important role in encouraging this change in an address in the Vatican to commemorate the 50th anniversary of the creation of the Synod of Bishops.

Cardinal Nichols, Archbishop of Westminster, was addressing the Synod on behalf of the European Bishops, at the invitation of Synod secretary Cardinal Baldisseri on 17 October during the XIV Ordinary General Assembly.

He recognised the changes in Europe over the years and how vital it has been for the Church and the Continent to move away from a Euro-centric view of the world.

“Europe is not what it was even in 1999,” said Cardinal Nichols.

“Any parish in the Diocese of Westminster, for example, will have parishioners from 30 or 40 different nations. As we know too well, the migration towards Europe of peoples from wars, violence and poverty in Arab States and from elsewhere is challenging our European sense of presence and status in the world.

“The European Union is facing critical questions and tensions, especially the temptation to remain a fortress, protecting itself and its material benefits and comforts, which, of course, have been drawn from the world over. Each country has its own challenges and difficulties. Europe has its enemies and must act with vigilance. But, and I quote, ‘It is right that we should be silent when children sleep, but not when they die.’”

He also spoke about the specific challenges of the current Synod’s General Assembly on the “Vocation and Mission of the Family in the Church and the Contemporary World”.

He related that in the recent European Bishops (CCEE) meeting in the Holy Land the Bishops talked about the importance of the family as fundamental to each person and to society as a whole.

“We recognised together that the family is the first witness to the faith in society, the first workshop in the faith and the backbone of every parish, the first tutoring in humanity for every person. Europe knows clearly now this challenge and the need to find ways of holding before people the full invitation of marriage in the Lord, its faithfulness, its fruitfulness and its witness.”

The Synod’s General Assembly will conclude on 25 October.

You can download Cardinal Nichols’ full speech from the top right corner of this page.