Campaign for free school meals to all children in poverty

CBCEW » Education » » Campaign for free school meals to a...

CSAN (Caritas Social Action Network) and the Catholic Education Service have given their backing to The Children’s Society’s ‘Fair and Square’ campaign which seeks to ensure that all 2.2 million children living in poverty will receive free school meals.

The campaign, which has received widespread media attention, highlights that more than half of children living in poverty are not currently receiving free school meals.  The charities are using government changes to the welfare system, to address the situation by arguing that all children whose families receive the new universal credit should be entitled to free school meals.

Helen O’Brien, Chief Executive of CSAN said, “The current system not only disadvantages the poorest children, jeopardising their nutrition, wellbeing and education; it additionally creates work disincentives by penalising parents moving into low-paid employment. The introduction of universal credit is a key opportunity for the government to take account of the evidence and public opinion, and adopt a fairer approach to this fundamentally important issue.”

By calling for extended entitlement, the provision of cashless systems to remove stigma and a new national review of nutritional standards, the campaign hopes to secure healthy free school meals for the 1.2 million children in poverty who currently do not receive them.

CSAN and its member charities have also raised concerns over food provision for children in poverty during school holidays.

Dr Rosemary Keenan CEO of the Catholic Children’s Society (Westminster) said, “I have heard first hand from poor parents, at our St Francis Family Centre in the East End of London, about the tremendous difficulties they have in making ends meet when they have to feed their children during the school holidays. The free school dinner is the main meal of the day for their children and having free school meals helps parents on very tight budgets to ensure that their child has at least one healthy meal a day.”

CSAN (Caritas Social Action Network) is the official social action agency of the Catholic Church in England and Wales.

The Fair and Square campaign is calling for: 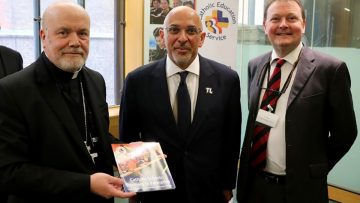