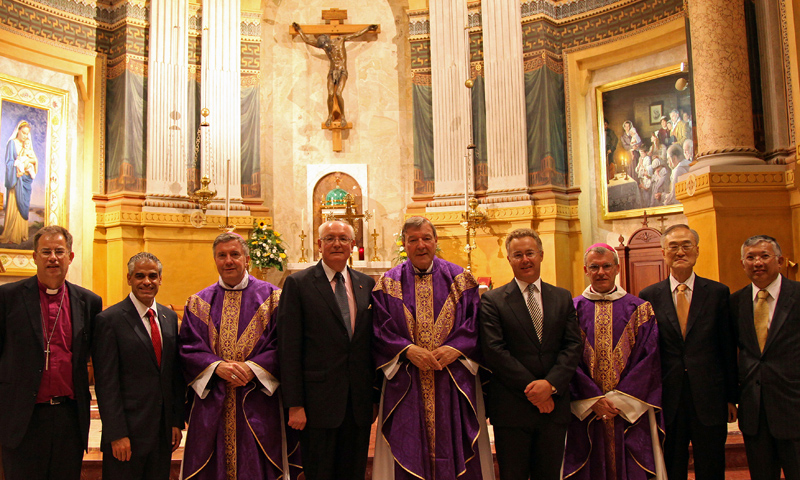 By Peter Jennings in Rome

The British Ambassador to the Holy See, H E Nigel Baker MVO, OBE, attended a special 10th Anniversary Memorial Mass for the victims of the 12 October 2002 Bali Bombings and their families, in Rome, on Friday evening, 12 October.

The Principal Celebrant was His Eminence Cardinal George Pell, Archbishop of Sydney.

On that dreadful day, 12 October 2002, two bombs planted by Islamic terrorists ripped through a bar and a club in the Kuta area of the Indonesian island of Bali, killing 202 innocent people, many of them young people on holiday.

The victims, cold-bloodedly murdered, came from 21 countries, and included 88 Australians, 38 Indonesians, 28 Britons and seven from the United States of America.

In the beautiful Chapel of Lady Queen of the Most Holy Rosary and St Peter Chanel, at Domus Australia, in Rome, purple vestments were worn for the simple Mass in English with the Kyrie, Sanctus and Agnus Dei sung in Latin.

The concelebrants included the Most Reverend Timothy Costelloe SDB, Archbishop of Perth, and the Right Reverend Christopher Prowse, Bishop of Sale; in Rome, together with Cardinal Pell attending the XIII Ordinary General Assembly of the Synod of Bishops, on The New Evangelization. The Australian Ambassador to the Holy See, H E John McCarthy KCSG, read the first reading and the responsorial psalm – “The Lord is my Shepherd”.

During his short homily Cardinal George Pell spoke about the horror of the terrible tragedy that struck Bali 10 years ago which killed so many people. He ended: “Most of all we pray for the survivors and their families that God will give them strength and peace.”

A few pews away a group of mainly young people from Bali, some dressed in traditional national costumes, sat in silence during a deeply prayerful and emotional Memorial Mass held  in a little piece of Australia, in the heart of the ancient City of Rome.

The Right Reverend Steven Croft, Bishop of Sheffield, in Great Britain, a Fraternal Delegate at the Synod, represented the Anglican Communion. *Domus Australia, the superb new pilgrim centre and guest-house for Australians in Rome, is situated in Via Cernaia, near Termini, the main railway station. It was established at the initiative of the Archdiocese of Sydney with the support of the Australian Bishops. Domus Australia was officially opened by Pope Benedict XVI on 19 October 2011.