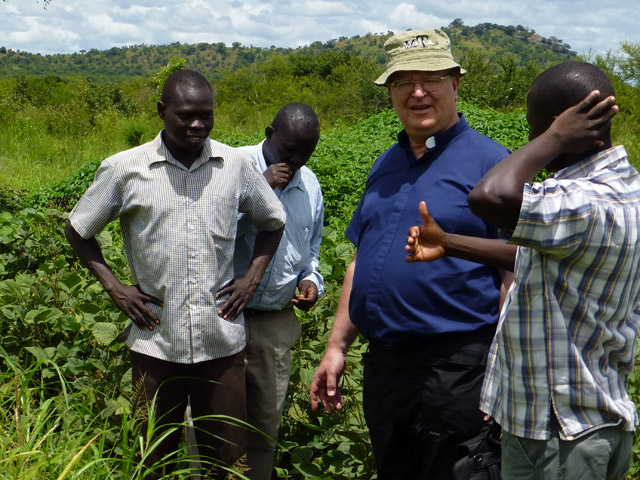 Bishop William Kenney, auxiliary Bishop of Birmingham, has called on the world to wake-up to the man made humanitarian disaster playing out in famine-torn South Sudan – a country he visited in 2012.

Speaking in response to a Pastoral Letter issued by the Catholic Bishops of South Sudan, Bishop Kenney said:

“Having visited the country over the past few years, I commend the pastoral message from my brother Bishops in the South Sudan.

“The people of that country are suffering a brutal civil war, resulting in widespread violence, economic breakdown and famine.

“The world must wake up to this man-made humanitarian disaster. The violence must stop and the international community must intervene.

“Meanwhile, I echo their concluding words and call on all people of goodwill to: ‘remain spiritually strong, and to exercise restraint, tolerance, forgiveness and love. Work for justice and peace; reject violence and revenge. We are with you.’

“Please remember the people of South Sudan in your prayers, support the famine relief and put pressure on our government to do their utmost to help bring an end to the fighting.”

The following is an appeal for Humanitarian Assistance from the Catholic Bishops in South Sudan:

We the Catholic Bishops in South Sudan have been following the unfolding humanitarian situation in South Sudan with care and vigilance. However, the latest government and famine Early Warning System figures predict that 4.9 million people will be in a food crisis across the country, many of them close to famine level between now and April 2017. The figure is expected to rise to 5.5 million people at the height of the lean season in July 2017 if nothing is done to curb the severity and spread of the food crisis.

The food security situation in South Sudan continues to deteriorate since the outbreak of fighting in December 2013, the humanitarian crisis has spiralled with more than three million people fleeing the conflict and seeking refuge in neighbouring countries and others as Internal displaced persons hosted across the country.

Our people are clearly deeply affected, as many have lost their lives, many of those displaced have lost their homes and property looted. Those forced to leave their land ended up with disrupted livelihoods with no sources of food and income.

Majority of urban households who used to host displaced relatives are now vulnerable and have developed coping mechanisms by reducing meals and avoiding expensive food items. A situation that has come up a result of a mismatch between wages earned and the high market prices.

We would like to acknowledge the continuous solidarity and support given to us by our brethren during the turbulent times we went through and are going through now in South Sudan.

We anticipate difficult time a head in 2017 as our people are likely to witness mass starvation by virtue of their multiple displacement especially in the states that traditionally produced cereals in surplus will be missing the planting season and that will in turn lead to further food insecurity in 2017.

We the Bishops’ in South Sudan make our heartfelt appeal for the people of South Sudan who are at this critical time in need of humanitarian assistance and a peaceful solution to address the ongoing conflict in the country. We are aware of many countries suffering from similar crisis but we can collectively avert this famine if as a family, we share the little we have to help the desperate people suffering across the country in 2017.

Ongoing fighting and consequently the insecurity that exist, has made all humanitarian interventions more than difficult.

Caritas South Sudan already alerted the network since last year that there were reports of death due to starvation in different dioceses and counties.

We, the Catholic Bishops of South Sudan call on the international community for immediate and unconditional concrete intervention and action before thousands of innocent lives are carried away and before it is too late.

We urge the Caritas Internationalis and International community to take all necessary steps for immediate action.

An immediate stop to the violence and free movement of population especially in the most affected counties.

Unconditional and unhindered access to urgently cater to the physical needs of the population in the remotest areas.

The full pastoral message can be downloaded using the link below or to the right of this article.