Archbishop tells Palestinian Christians the “promotion of truth, love, justice and peace” is integral to the Church’s mission 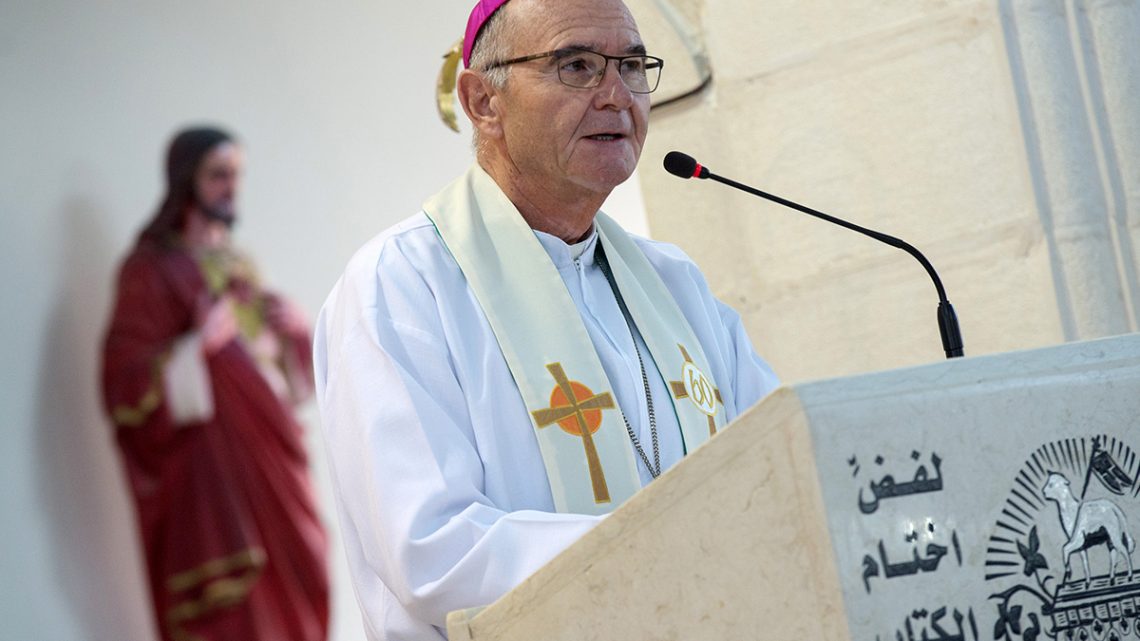 In a homily preached at the Church of the Visitation in the Palestinian town of Zababdeh in the northern West Bank, the Most Reverend Stephen Brislin, Archbishop of Cape Town, told parishioners that Catholics cannot remain silent in the presence of untruth, injustice, hatred and violence.

He was speaking at Sunday Mass on the feast of the Baptism of the Lord (13 January) as part of the annual Holy Land Co-ordination pilgrimage of prayer and persuasion.

In the same way the early Christians baptised by John the Baptist asked the question ‘What must we do?’, Archbishop Brislin challenged Christians to ask themselves the same question.

“Firstly, we need to be freed from our own sinfulness – to reject anger, hatred and inflexibility within ourselves. Secondly, we must also cling to our faith and the hope it gives us. We cannot give up – our only true hope is in Christ Jesus who came to save the world. Without him we are powerless. We believe that he is Immanuel and that he is present and active in the world. Thirdly, amidst all our suffering, we will persevere to be servants of his Kingdom and to continue promoting, love, truth, peace and justice. What else can we do? This is our calling.”

Archbishop Brislin concluded by recognising the absence of a ‘quick fix’ to ease the tension and violence in the Holy Land but affirmed the community with the clear message that the world’s Christians stand with them:

“We cannot solve the problems of the Holy Land, but what we can do is to say to you: you are not alone. We hold you in our prayers, but we also hold you in our hearts. May the God of creation and salvation bless and strengthen you, that you may continue to give faithful witness to him.”

It is a great privilege to be with you this morning to celebrate the Eucharist which binds us together into the Family of God and the Body of Christ. It is a particular joy since we are celebrating the Feast of the Baptism of the Lord, not far from the place where his baptism occurred in the river Jordan. We come as bishops of the Holy Land Co-ordination, bishops from the Anglican and Catholic Church, mostly from Europe and North America, but two of us are from South Africa. We are accompanied by professionals from a number of countries. Our main purpose is to express our solidarity with the Christians of the Holy Land and to gain a deeper insight into the challenges you face.

We know and understand the difficult circumstances in which you live and we also understand the important vocation you have of keeping the flame of Christianity alight in the place of the Messiah’s birth, ministry, death and resurrection. Many come here on pilgrimage to visit the holy places. We have come for the living stones of God’s Temple. We come as brothers and sisters united in our discipleship and commitment to Jesus Christ and his Kingdom.

Looking back over the past year and its many dramatic events, I found one event inspiring and deeply moving. It reinforced my belief in the goodness of people. I am referring to the rescue of the 12 Thai boys and their coach from the caves in Thailand. Their plight captured the imagination of the whole world and there was an overwhelming feeling of goodwill towards the boys and their families. People of all faiths were praying for their safety, many volunteered and put their lives at risk in order to bring them out of danger. After 18 days they were rescued, all of them safe and the world rejoiced and gave thanks to God. Sadly, one of the divers lost his life in trying to save the boys. This event truly shows the goodness, generosity and goodwill that people are capable of. People are merciful, compassionate and caring, able to make great sacrifices for others. The rescue of the Thai boys was dramatic and much publicized but the fact is many people, in their daily lives and without fuss or publicity, do an enormous amount of good for their neighbour.

Sadly, we also know that there is another side to humanity – a harsher more violent side. Even while the world turned its attention to the trapped soccer team, thousands of children were dying of starvation in Yemen and the world was indifferent. Child soldiers are forced to fight in many conflicts in Africa, yet the world is largely silent. Thousands and thousands of people are displaced every year due to war and violence, yet often they are turned away without help. Violence and bloodshed on the border of Gaza seems quickly forgotten by many.

Jesus’ baptism captures the spirit which was shown in the rescue of the Thai boys and the many sacrifices people make in their daily lives. His baptism heralds the call to conversion, the call to “let your armour be the Lord Jesus Christ” and to proclaim him to the world. It is the fulfilment of the Old Testament, but it also the dawn of a new era of God’s salvation. It was after his baptism that Jesus began his public ministry in fulfilment of the prophecy of Isaiah: “the Spirit of the Lord is on me, for he has anointed me to bring the good news to the afflicted. He has sent me to proclaim liberty to captives, sight to the blind, to let the oppressed go free, to proclaim a year of favour to the Lord”.

After his baptism and the temptations in the desert Jesus announced to his disciples “the time is fulfilled, and the Kingdom of God is close at hand. Repent, and believe the gospel”. Throughout his ministry Jesus proclaimed God’s kingdom, in word and action. Through his teachings he opened the minds of people to glimpse the depth of the new way of life. Through his miracles he gave concrete expression to the love, mercy and tenderness of God towards his people and that, indeed, salvation was at hand. This salvation knows no boundaries.

We heard the words of St Peter in the Second Reading: “Truly I perceive that God shows no partiality, but in every nation anyone who fears him and does what is right is acceptable to God”. Salvation is offered to all, of every nation, race, tribe and language – it is offered to those who will bear its fruit.

The Baptism of the Lord reveals Jesus as the Son of God, and he reveals to us God the Father. It is a Transformation because it is the dawn of the new era, the proclamation of God’s liberating action and the freedom of the sons and daughters of God. The mission of the Church is to continue that proclamation, in word and deed, and we are all called to participate in that mission. It is to restore Creation, disfigured by people, to that which God intended it to be. It is a noble calling that summons goodness and generosity from people – to be the people God wants us to be. The mission is for us to be servants of the Kingdom of God and to offer that Kingdom to all.

His Kingdom is unlike earthly ones – it is “an eternal and universal kingdom, a kingdom of truth and life, a kingdom of holiness and grace, a kingdom of justice, love and peace”[8]. The promotion of truth, love, justice and peace are integral to the mission of the Church. In the presence of untruth, injustice, hatred and violence we cannot remain silent. We have an obligation to witness to the Kingdom. We cannot be silent and nor can we be neutral. To quote Archbishop Desmond Tutu: “if you are neutral in situations of injustice, you have chosen the side of the oppressor. If an elephant has its foot on the tail of a mouse and you say that you are neutral, the mouse will not appreciate your neutrality”.

In today’s First Reading, Isaiah speaking of the Servant of God, says: “a bruised reed he will not break, and a dimly burning wick he will not quench; he will faithfully bring forth justice”. With the same tenderness, gentleness and mercy that God shows to those who suffer, who are afflicted, who are oppressed, who are denied their rights, who are prevented from reaching their full potential as human beings, we continue to serve God’s Kingdom with resolve and courage. What else can we do? It is our mission and we must be faithful to our Master.

Pope Francis expressed it like this: “Essential … is the moral imperative of ensuring social justice and respect for human dignity. The great biblical tradition enjoins on all peoples the duty to hear the voice of the poor. It bids us to break the bonds of injustice and oppression which give rise to glaring, and indeed, scandalous social inequalities. Reforming the social structures which perpetuate poverty and the exclusion of the poor first requires a conversion of mind and heart”.

Jesus’ Baptism gives us the courage to hope. Hope that there is still goodness in the world and that good will triumph over evil. Hope gives us the courage to believe in Christ’s liberation from sin and death. Those who went to be baptized by St John the Baptist asked him “what must we do?” We should ask ourselves the same question.

Firstly, we need to be freed from our own sinfulness – to reject anger, hatred and inflexibility within ourselves.

Secondly, we must also cling to our faith and the hope it gives us. We cannot give up – our only true hope is in Christ Jesus who came to save the world. Without him we are powerless. We believe that he is Immanuel and that he is present and active in the world.

Thirdly, amidst all our suffering, we will persevere to be servants of his Kingdom and to continue promoting, love, truth, peace and justice. What else can we do – this is our calling

Once again, I thank you on behalf of all the delegates of the Holy Land Co-ordination for welcoming us this morning. Your continued presence in the Holy Land and your faith are important not only for yourselves but for Christians throughout the world. We thank you for that and for the inspiration that you give to us. We cannot solve the problems of the Holy Land, but what we can do is to say to you: you are not alone. We hold you in our prayers, but we also hold you in our hearts. May the God of creation and salvation bless and strengthen you, that you may continue to give faithful witness to him.