Archbishop: “It cannot be presumed that everyone is in favour of same-sex marriage” 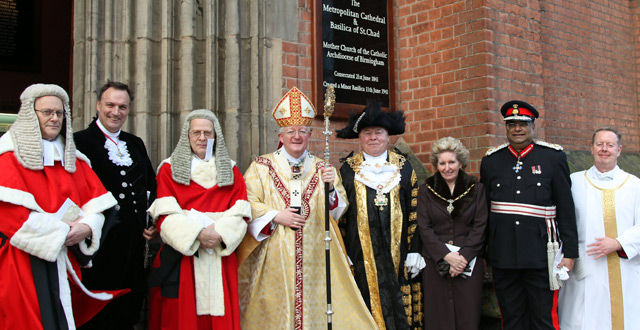 The Most Reverend Bernard Longley, Archbishop of Birmingham, gave the following homily during the Annual Civic Mass, at the Metropolitan Cathedral and Basilica of St Chad, Birmingham, on the Solemnity of Christ the King, Sunday, 25 November 2012:

One of the distinctive characteristics of the civic year in Birmingham is the sequence of religious services arranged and celebrated for the good of our city. Each act of worship, while giving thanks and glory to God, also recognises the role of those who serve the common good in public life. Faith communities recognise that life in the public forum can be demanding as well as rewarding and our first response is to pray for the intentions of those who serve in this way.

This round of prayer continues throughout the year but it finds its most conspicuous expression whenever the civic family gathers together in cathedral, mosque, synagogue or temple in a communal moment of petition and thanksgiving. That is one of the remarkable characteristics of this city that first struck me when I arrived in Birmingham three years ago. Civic leaders, the judiciary, diplomats and those representing the public services upon which we all depend are regularly made welcome by the wide variety of faith communities that make up the religious profile of our city.

This city is richly blessed with a diversity of faith communities who hold each other in mutual respect and who seek to work together for the good of our neighbours whether or not they subscribe to any system of religious belief. They are committed to dialogue with one another and wherever it is possible to witness together to the values and beliefs that we hold in common. The Birmingham Faith Leaders Group is an expression of this commitment and we appreciate the support we receive from the City Council and our annual opportunity to meet in the Council House under the Chairmanship of the Lord Mayor.

This experience of good ecumenical, inter-religious and civic relations was immensely helpful to me when I recently attended an international Synod of Bishops in Rome convened by Pope Benedict XVI. Its focus was the New Evangelization, or how to put across the message of Christian faith in a way that will be understood and well-received – an evangelization that is new in its ardour, methods and expression in the words of Blessed Pope John Paul II.

Among those new methods we were encouraged to embrace new technology, to make careful and discerning use of new forms of personal communication such as podcasts and blogs, so as to reach the younger generation. Every faith community is concerned with the transmission of faith across the generations, sharing values and insights that help to hold our communities together. Whenever families are united in their beliefs they also contribute to social cohesion within their local neighbourhoods.

Faith leaders also represent traditions that respect the rule of law while preserving the right to reflect critically on the principles that underpin our laws. The wisdom of the scriptures and traditions that we have received and the experience of many generations of believers have significant consequences for our contribution to the common good. We have inherited a responsibility to offer critical insights, based upon values received through faith, to those who formulate and interpret our laws, and always offered with due respect to the responsible authorities.

The strong support of many of our Churches and faith communities for the traditional understanding of marriage cannot be overlooked. This message from the faith communities is a reminder that the Government needs to listen carefully to the voices of ordinary people. It cannot be presumed that everyone is in favour of same-sex marriage because a vocal minority has captured the attention of the media. At the same time faith communities must welcome a wider public debate in which we can dialogue with those who oppose our views.

Any civic occasion hosted by a religious community provides a moment of dialogue between those who gather as partners in a common enterprise. We have a chance to reveal ourselves to each other more effectively in the face of current challenges and the demands of our time. Each civic service provides a glimpse into the life of the faith community offering its welcome. It also enables that faith community to listen to the common concerns of our fellow citizens as they are heard and discerned by those in public life who are charged with making a response.

As well as praying for your intentions the ancient faiths represented in our city also have long experience of equipping people to live lives that achieve personal fulfilment and that contribute greatly to the good of their neighbours. It is a source of pride that so many of those who volunteer their time and expertise in charitable activities across the city are also members of its faith communities.

The faith communities in Birmingham are often among the first to recognise emerging social needs within our local communities. Many of them have initiated and are involved in local projects that are making a practical contribution towards building a revived culture of social responsibility.

Ecumenical partnerships have also drawn the churches together in a common endeavour to help tackle poverty and the ills of social exclusion. One local example of this, only a couple of years old, is St Chad’s Sanctuary, behind this cathedral in Shadwell Street and next door to the William Booth Centre. It is a modest but effective project, initiated by the Salvation Army and the Catholic Church, but now supported by people from many different religious congregations and people of good will and with generous hearts. It has brought together many volunteers to provide a place of welcome and friendship for those seeking support and guidance from the Refugee Council just along the road.

Good will and generous hearts – that is a combination that can achieve much, and I am sure that each of us in our particular spheres of activity recognises this powerful combination in the words and actions of friends and colleagues. In one of the hymns sung today we call upon Jesus as king to rule our hearts and minds and wills. This request emerges from the Christian belief in the Kingdom of God where the benevolent rule of Christ will one day be willingly embraced by all people.

In that Kingdom the usual understanding of power is upturned. Jesus tells the Roman Governor, Pilate: Mine is not a kingdom of this world; if my kingdom were of this world, my men would have fought to prevent my being surrendered. From the very beginning of his life, even in the circumstances of his birth at Bethlehem, Jesus demonstrated that his power lay in loving service, founded on his obedience to the will of his Father. Pope Benedict emphasised this when reflecting on the Feast of Christmas. He said:

In the Grotto of Bethlehem God shows himself to us as a humble “infant” to defeat our arrogance. Perhaps we would have submitted more easily to power and wisdom, but he does not want us to submit; rather, he appeals to our hearts and to our free decision to accept his love. He made himself tiny to set us free from that human claim to grandeur that results from pride. He became flesh freely in order to set us truly free, free to love him.

With the season of Christmas now so close I am delighted that the German market has provided the city centre with the most beautiful crib scene depicting the story of Christmas and the birth of the saviour as a reminder of God’s love to all who pass it. I am also grateful that the City’s Museum and Art Gallery is once again preparing the Nativity Trail, to be opened this Friday and enabling visitors to experience and appreciate the story at the heart of Christian faith through the beauty and the message of great works of art. These offer two little examples of the opportunities before us to work more closely together for the common good.

Once again, I thank you all for being here at St Chad’s today. May God’s blessing be upon all those who serve this city in public office as we now commend them to the Lord in the prayers of this Civic Mass.

Archbishop Bernard Longley and Canon Gerry Breen, the Cathedral Dean, pictured with the Lord Mayor of Birmingham, Councillor John Lines and the Lady Mayoress, High Court Judges, the High Sheriff and the Lord-Lieutenant for the West Midlands, after the Civic Mass at the Metropolitan Cathedral and Basilica of St Chad, Birmingham, on the Solemnity of Christ the King, Sunday, 25 November.