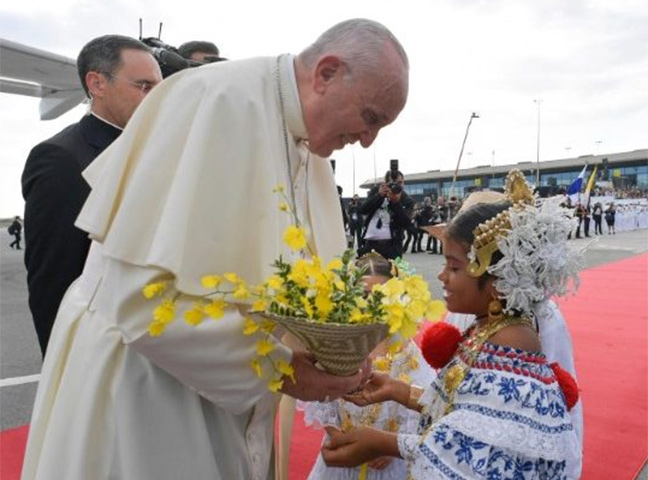 For thousands of young people, the arrival of Pope Francis in Panama on Wednesday afternoon marks the true beginning of the 34 World Youth Day.

There were those who had waited at the airport all day. And it was hot (33°C not counting the horrendous humidity).

The last time a Pope stepped off a plane from Rome onto the soil of Panama was 36 years ago. It was March 5th 1983. And the Pope was John Paul II.

The world was still dominated by the North American and Soviet superpowers, and the Motorola Company had just launched the first mobile phone, very different to the one on which you are probably reading or listening to this report right now.

The flying time from Rome to Panama City is just under 13 hours. And there’s a 6-hour time difference. So Pope Francis looked justifiably tired as he walked down the steps of the Alitalia aircraft and greeted Panamanian President Juan Carlos Varela Rodríguez and the First Lady. With head bowed he listened attentively to the national anthems of the Holy See and Panama, respectively, and shook hands with the authorities present.

Then, just as the security detail was dutifully ushering him into the waiting car, the Pope turned and waded into the crowd that had been trying frantically to grab his attention in every way possible.

That’s when his demeanour changed dramatically. At the sight of the smiling, flushed and excited faces (not to mention the beautiful babies thrust at him from every direction), Pope Francis became suddenly animated. It was as though he had just woken up. Every sign of fatigue disappeared as he waved, hugged, blessed and beamed with obvious delight.

On Thursday, the papal programme begins in earnest. His first appointment of the day is at the Presidential Palace where he pays a courtesy visit on the President and meets local Authorities and members of the Diplomatic Corps. He will also have an important encounter with the Bishops of Central America before lunch.

But the highlight of the day, at least as far as the young people are concerned, is the opening ceremony for the World Youth Day at the Campo Santa Maria di Antigua on the Coastal Belt.