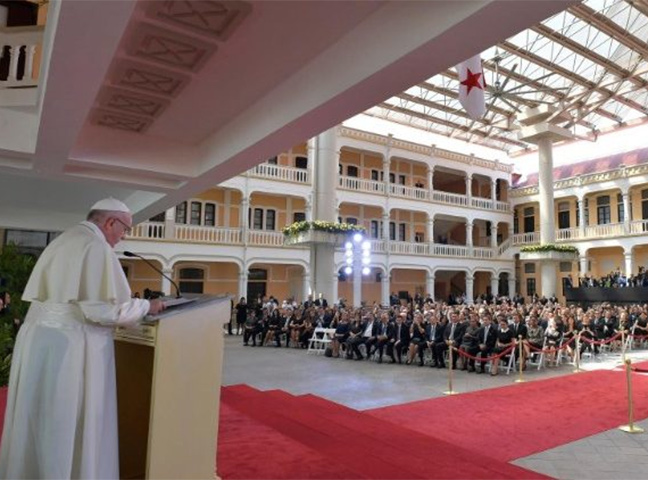 A quote from a South American revolutionary, the words of a popular prayer, and the verse of a poem by a national hero. That’s how Pope Francis chose to address Panama’s President, decision-makers, and members of the Diplomatic Corps, in his first public discourse since arriving in this Central American nation.

“If the world had to choose its capital, the Isthmus of Panama would be marked out for this great destiny”. Thus spoke Simon Bolívar. The 19th century military hero, political statesman, and revolutionary icon, dreamed of unifying what today we call Latin America. He convoked the leaders of his time in the hopes he could convince them to share his dream of a Great Fatherland.

In Panama, on Thursday, Pope Francis repeated that quote and underlined the idea of a “convocation” as something that helps us realize we really can create, and dream of, a great fatherland that can “include, respect and embrace the multicultural richness of each people and culture”.

He then described Panama as “a land of convocation and of dreams”. By welcoming the dreams of young people, the Pope said, Panama challenges the certainties of our time, and opens ups new, vital, respectful, and compassionate horizons.

“Give us our daily bread: may we eat it in our own homes and in a state of health worthy of human beings”. Thus reads a popular Panamanian prayer.

Pope Francis used it to illustrate how governments and political leaders need to guarantee “an authentically human politics”.

Young people, he said, demand this commitment. They demand that those in charge “live in simplicity and transparency, with a clear sense of responsibility for others and for our world”.

“When they see you, my native land, they might say that you were shaped by God’s will, so that beneath the sun shining down upon you, all humanity can come together in you”. Thus sings a poem by Ricardo Mirò, Panama’s most revered poet and writer.

For Pope Francis, these words express the hope that “another world is possible”.

Young people, he said, “urge us to take our part in building it, so that our dreams do not remain ephemeral or ethereal”. We must ensure that everyone has the chance to dream of a tomorrow, said the Pope. Because “the right to the future is a human right as well”.