The Synod: Walking Together 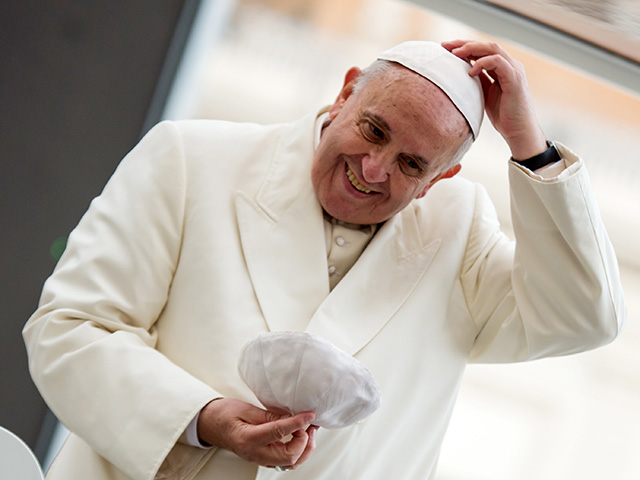 An introduction was given by Cardinal Lorenzo Baldisseri, and the president of the Episcopal Conference of Austria and cardinal archbishop of Vienna Christoph Schonborn pronounced a commemorative discourse.

Below are extensive extracts from the Holy Father’s discourse, in which he reiterated that the very name “Synod” – “walking together” – indicates what the Lord asks of us.

“From Vatican Council II to the current Synod Assembly on the family, we have experienced in an increasingly intense way the beauty of ‘walking together’. … We must continue on this road. The world in which we live, and which we are called upon to love and serve even in its contradictions, demands of the Church a strengthening of synergies in all areas of her mission. The path of synodality is the path that God expects from the Church in the third millennium. … In the Apostolic Exhortation ‘Evangelii Gaudium’ I underlined how ‘the People of God is holy thanks to this anointing, which makes it infallible in credendo’, adding that ‘all the baptised, whatever their position in the Church or their level of instruction in the faith, are agents of evangelisation, and it would be insufficient to envisage a plan of evangelisation to be carried out by professionals while the rest of the faithful would simply be passive recipients’. … It was this conviction that guided me in my wish that the People of God be consulted in the preparation of the dual Synod on the family. … How would it be possible to speak of the family without speaking with families, listening to their joys and hopes, their sorrows and their troubles?”.

“A Synodal Church is a Church who listens, aware that listening is more than hearing. It is a process of mutual listening in which each person has something to learn. The faithful, the Episcopal College, the bishop of Rome: each one listening to the others, and all listening to the Holy Spirit, the ‘Spirit of truth’. … Synodality, as a constitutive dimension of the Church, offers us the best interpretative framework for understanding her hierarchical ministry … in which no-one may be ‘higher’ than the others. On the contrary, within the Church it is necessary to stoop to put oneself in service to one’s brothers along the way. Jesus constituted the Church, placing at the summit the apostolic College, in which the apostle Peter is the ‘rock’, he who must ‘confirm’ his brothers in the faith. But in this Church, as in an upturned pyramid, the summit is below the base. Therefore, those who exercise authority are called ‘ministers’: because in accordance with the original meaning of the word, they are the least of all”.

“In an synodal Church, the Synod of Bishops is only the most evident manifestation of a dynamism of communion that inspires all ecclesial dimensions. The first level of the exercise of synodality occurs in the particular Churches. … The Code of Canon Law reserves ample space to those who are usually referred to as the ‘organs of communion’ of the particular Church: the presbyteral Council, the College of Consultors, the Chapter of Canons and the pastoral Council. These instruments, that at times proceed wearily, must be accorded their due value as offering opportunities for listening and sharing. … The second level is that of the Ecclesiastical Provinces or Regions, the Particular Councils and, in special way, the Episcopal Conferences. … In a synodal Church, as I have already stated, ‘it is not advisable for the Pope to take the place of local bishops in the discernment of every issue which arises in their territory. In this sense, I am conscious of the need to promote a sound decentralisation’. … The final level is that of the universal Church. Here the Synod of Bishops, representing the entire Catholic episcopate, becomes an expression of episcopal collegiality within an entirely synodal Church”.

“I am convinced that, in a synodal Church, more light could also be cast on the exercise of the Petrine primacy. The Pope is not alone and above the Church, but rather within her, baptised among the baptised, and within the episcopal College as a bishop among bishops, called upon at the same time, as the Successor of the apostle Peter, to guide the Church of Rome who presides in love among all the Churches. While I repeat the need and urgency to think of a ‘conversion of the papacy’ … I am convinced that I have, in this respect, a particular responsibility, above all in ascertaining the ecumenical aspiration of the majority of Christian communities and in listening to the request that is presented to me to find a way of exercising this primacy that, while not renouncing in any way the essence of its mission, is open to a new situation”.

“Our gaze also extends to humanity. A synodal Church is like a standard borne among the nations in a world that, while invoking participation, solidarity and transparency in public administration, frequently leaves the destiny of entire populations in the rapacious hands of small powerful groups. As a Church who ‘walks together’ with mankind, participating in the labours of history, we cultivate the dream that the rediscovery of the inviolable dignity of peoples and the function of the service of authority may also help in the edification of civil society in justice and fraternity, giving rise to a world that is more beautiful and worthier of humanity for the generations to follow us”.

catholicnews.org.uk/family-synod-2015
Our web section on the Ordinary General Assembly of Synod on the Family