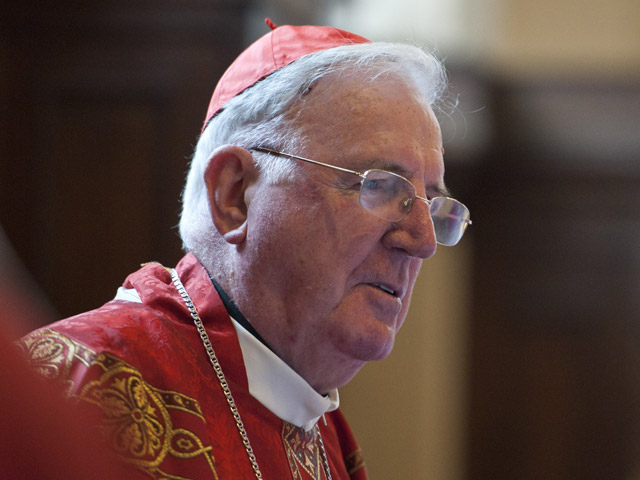 A Mass of thanksgiving for Cardinal Cormac Murphy-O’Connor’s birthday and official retirement was celebrated in Westminster Cathedral on Friday 21 September. In attendance were the seminarians, priests, people and bishops’ of the Diocese of Westminster. Archbishop Nichols was the principal celebrant.

He recalled the day of his installation as Archbishop of Westminster and a quote from St Gregory that he cited on that day:

“Who am I? What kind of a watchman am I? I do not stand on the pinnacle of achievement. I languish rather in the depths of my weakness. And yet the Creator and Redeemer of Mankind can give me, unworthy though I be, the grace to see life whole and the power to speak effectively of it. It is for love of Him that I do not spare myself in preaching Him.”

He spoke with gratitude of: “the saintly people that I’ve met – obviously my parents, my family – especially my mother and father – and countless lay women and men that I’ve met in the parishes, fellow priests who I know and care for and bishops – holy people, saints.”

Archbishop Nichols thanked the Cardinal for his “irrepressible zest for life” and his “great capacity for fun and laughter”. Calling him a “unique creature”, as the one and only living Archbishop Emeritus of Westminster, the Archbishop quipped that he sincerely hoped that he would not be the last.

Expressing his sincere gratitude for the Cardinal’s great love for the people and priests of the diocese, the Archbishop concluded by saying:

“We will treasure you and we will look forward to hearing your words again and learning from that great wisdom and kindness.”