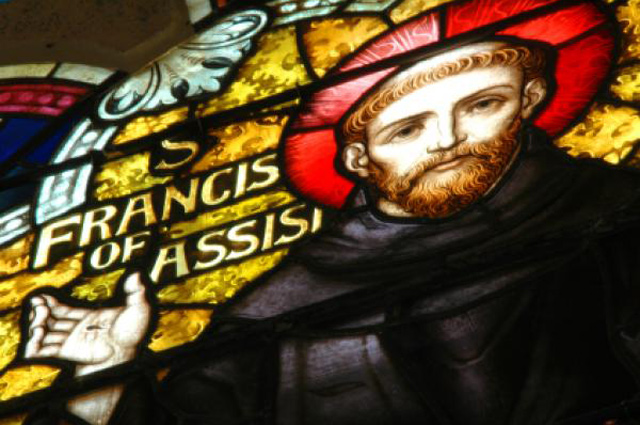 The new Pope is named after the much-loved Italian saint, St Francis of Assisi, who was born in 1181.

St Francis’ childhood and youth was privileged; his father, Pietro Bernardone, was a very rich businessman. Pietro’s hope was that his son would follow in his footsteps as a cloth merchant, but despite early promise, it became clear that God has prepared a very different path for Francis.

Francis was a born leader and an avid socialite who is said to have spent nights in wild parties. His biographer, Thomas of Celano, who knew him well, said: “In other respects an exquisite youth, he attracted to himself a whole retinue of young people addicted to evil and accustomed to vice.”

It was Francis’ ambition to be a noble and a knight; he wasn’t concerned about holiness. He decided that battle was a good place to win prestige and honour and his time came when Assisi declared war on the nearby town of Perugia. Francis was captured, imprisoned and ransomed after a year. After a call for knights was made for the Fourth Crusade he volunteered hisservices, but only one day’s ride from home he had a dream in which God told him that he was on the wrong path and so he turned around.

On his return to Assisi his conversion of life was gradual, and he began to spend more time in prayer. One day when he met a leper, although Francis was repulsed by the leper’s appearance and smell, Francis kissed his hand. The kiss was returned and Francis was filled with joy.

Whilst visiting a nearby church at San Damiano he heard Christ on the crucifix say to him, “Francis, repair my church” and so Francis began re-building the crumbling building. He began to sell his Father’s cloth to repair the church, which his Father felt was an act of theft and consequently dragged him before the local bishop. Francis gave his Father the money for the cloth and stripped off his clothes. Francis had nothing, choosing from that moment, a life of poverty and service of the poor.

Although never Francis’ intention, people started to join him in his way of life which focused on living the Gospel of Jesus Christ in simplicity and radically. This was to lead to the foundation of the Franciscan Religious Order that now has brothers and sisters, living together in communities, working in service of the poor all over the world.

Francis particularly experienced God through nature and saw all God’s creations as part of his brotherhood. One famous story involves a wolf that had been eating human beings. Francis intervened when the town wanted to kill the wolf and talked the wolf into never killing again. The wolf became a pet of the townspeople who made sure that he always had plenty to eat.

In later years, after many different struggles, Francis began to go blind. He died on 4 October, 1226 aged 45. He is the patron saint of ecologists and merchants.